Joey Votto should be the face of baseball right now. He should be the biggest name in the game, there should be cameras following his every move, national TV commercials and the talking heads on TV saying “Votto” so much that you’d think it was a verb. 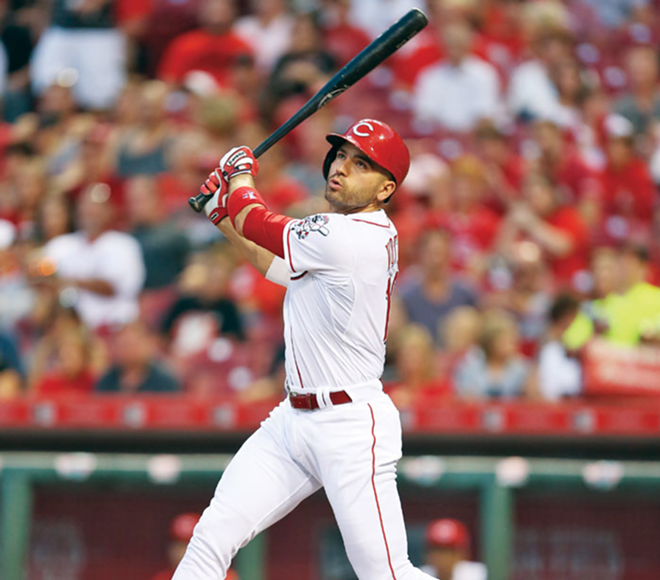 Joey Votto should be the face of baseball right now. He should be the biggest name in the game, there should be cameras following his every move, national TV commercials and the talking heads on TV saying “Votto” so much that you’d think it was a verb.

Right now, Votto might be the best player in the game, but watching ESPN or MLB Network, you wouldn’t know it. There’s Bryce Harper, Albert Pujols, Derek Jeter, Joe Mauer, Stephen Strasburg, Josh Hamilton, Matt Kemp and so many others that are the talk of the baseball world. Look at Fox’s advertising for the All-Star Game, notice a star missing? Yep, it’s Votto.

And although some will bring up the effects of Great American Ball Park, the new-world baseball statistics show Votto isn’t just a product of his environment. His OPS+ — which is a measure of the on-base percentage plus slugging, then sent through a formula to take in account the rest of the league and the park factors — is a big-league best 204. The way OPS+ works is that 100 is considered the major-league average. And the only other player close is the Mets’ David Wright, who is at 187. Former Reds Paul Konerko and Josh Hamilton are atop the American League leaderboard in the stat at 174.

And then there’s WAR, Wins Above Replacement, which tries to measure a player’s entire contribution to the team. There are several different formulas used to calculate WAR, but the two major ones, from Baseball-Reference.com and FanGraphs.com, come to the same conclusion, and you can guess what it is: Votto is the best player in the game through the middle of June. Baseball-Reference.com has Votto leading Wright in WAR 4.3 to 3.7, while FanGraphs.com has Votto leading 4.4 to 4.0.

Votto won his first Gold Glove last season, and it’s hard to believe he won’t win it again in 2012.

Votto’s 2012 could also be historic — consider these two tidbits. According to ESPN.com’s Jayson Stark, Votto is on pace for 201 hits and 136 walks. There’s only one person in the history of baseball to walk that many times in a 200-hit season, and that’s Babe Ruth. And then there’s the doubles. Last season Votto led the National League with 40 doubles. He was just 12 shy of that number after the weekend series with the Mets. He’s currently on pace for 70 doubles this season, which would break the single-season record of 67 set by Earl Webb in 1931, and no player has hit 60 doubles since 1936. In Webb’s record-setting 1931, he hit 14 home runs, a mark Votto could reach by the time you read this.

In short, Votto’s having a historic season, even if he falls off a bit (it should be noted that in his career, he’s been best in May, but his second-best month is September), he could still put up a historic season and a win a second MVP. You’d think people outside the Cincinnati area would notice by then, but if they don’t, there’s one person who would be very happy — Votto.

Votto’s thoughts on the matter were pretty much clear on Opening Day. Following the Reds’ 4-0 victory over the Marlins, reporters clamored around Aroldis Chapman, Scott Rolen and Jay Bruce. Votto sat at his locker to see if anyone would approach him. After a couple of minutes, he walked over to Rob Butcher, the team’s director of media relations, and had a word for him. Butcher then shouted, “Does anyone need Joey Votto?”

Reporters looked at Butcher, at Votto and each other. Nobody moved toward him, and Votto headed toward the exit. But before he left, he said loud enough for a couple of us to hear, “That’s why I love this market.”

Votto isn’t the only Red that should be in Kansas City next month — Aroldis Chapman, Johnny Cueto and Brandon Phillips also deserve an invite. Votto, rightly, leads all first basemen in voting by a wide margin (at least the fans are taking notice, if not the media), while Phillips is in second. However, Phillips could be a casualty if he doesn’t win the fan voting. The Braves’ Dan Uggla is leading and has a good case for winning the starting spot, and then Jose Altuve could be the Astros’ lone representative. If Tony La Russa only takes two second baseman, Phillips could miss out on his second All-Star appearance. There’s another Reds darkhorse, and that’s Zack Cozart. On June 19, the Cardinals’ Rafael Furcal overtook Troy Tulowitzki in the voting for starter at shortstop, leaving Cozart with a case for backup. Only the Astros’ Jed Lowrie and Chicago’s Starlin Castro (likely that team’s only representative) have a higher WAR in the NL than Cozart.