We Want to Claim Cincinnati's Pirate Island, and 8 Other Cincinnati Stories You May Have Missed This Week 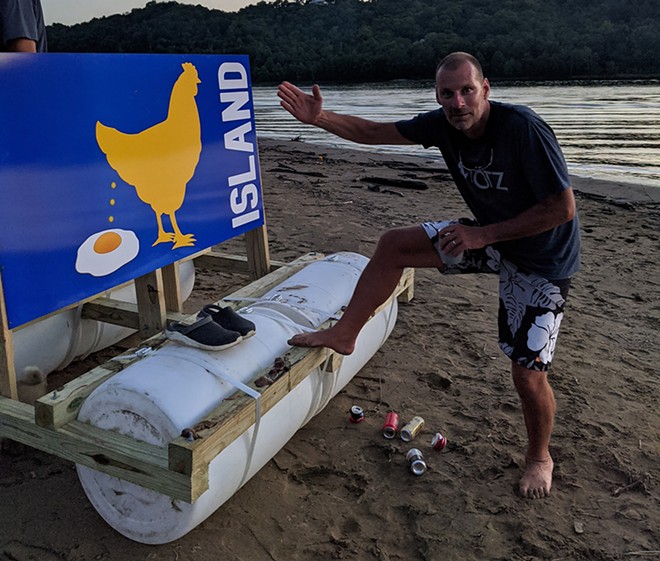 Cincinnati is due for a relatively quiet week soon, right? Nope, sorry, no serenity here. In recent days, the Queen City has dealt with new COVID-19 norms, discovered an itty-bitty island, watched a rookie throw triple-digit fastballs and got high AF (if you've still got cravings, Greater Cincinnati Restaurant Week can help). Follow along for the big headlines.

CVG Airport, Amtrak, Metro, TANK, Uber Drop COVID-19 Mask Requirements in Cincinnati
Over the past two years, the Centers for Disease Control and Prevention (CDC) had extended its masking requirement for passengers on airplanes, trains, buses and other transportation — most recently until May 3 — but this week, Florida Judge Kathryn Kimball Mizelle (who was appointed by former U.S. President Donald Trump) overturned the extension, saying that the decision to require masks belongs to individual airlines and other transit providers instead of to the federal government. The U.S. Department of Justice is appealing Mizelle's decision, but in the meantime, both Ohio Gov. Mike DeWine and First Lady Fran DeWine have COVID-19. Read CityBeat's story about where you'll need to still mask up on Cincinnati transit.

Cincinnati Reds' Hunter Greene Sets Pitching Velocity Record, Gives Fans Something to Actually Cheer About
As of April 22, the Cincinnati Reds are sitting on the MLB's worst record. In fact, the Reds haven't won a single game since the home opener on April 12, when CEO Phil Castellini basically told fans to kick rocks for daring to question the team's decision to front a mediocre team year after year. But Hunter Greene has been a bright spot, routinely clocking triple-digit fastballs when he made his major-league debut on April 10. He didn't let up in his second game, either, setting a new record for the most 100+ MPH pitches in a single game during the Reds' April 16 loss against the Los Angeles Dodgers. Read CityBeat's story about the significance of Greene's speedball, plus get ready for Greene to make his home debut on April 22.

Cincinnati Takes New Steps Toward More Direct LGBTQ+ Protections in Municipal Code
Discrimination is baked into so many systems in Cincinnati and around the country. And though the Queen City has proactively addressed some of it, there's always room for improvement. Cincinnati City Council member Reggie Harris is spearheading local efforts for "equal protection under the law" by working with local officials to update language within the city's municipal code. Read CityBeat's story about which sections soon could see changes and why they're important.

New Pirate Island Appears in Cincinnati at Confluence of Ohio and Little Miami Rivers
Having an island paradise where your job, your obligations, maybe even your family cease to exist is a dream for many, and two clever entrepreneurs say they're going to make it happen right here in Cincinnati. The legal side is a bit dubious, but theoretically, their People's Republic of Chicken Island could be their new oasis. Read CityBeat's story about how the island came to exist.

What Does It Mean if Cincinnati's Terrace Plaza Hotel Becomes a Designated Local Landmark?
A historically significant Cincinnati building that people either love to love or love to hate is one step closer to receiving local landmark designation. The divisive building, vacant for years, is now up for sale, with a price tag of just $10.5 million. But will a potential new buyer really change anything? Read CityBeat's story about what a landmark designation could mean for a renewed Terrace Plaza Hotel.

Opinion: 5 Terrible Things to Remember About Middletown Native J.D. Vance, Trump's New Darling
Was former U.S. President Donald Trump "America's Hitler?" Like half the country, Vance thought so — at least at one point. Now the Hillbilly Elegy author simply perpetuates Trump's claims that the 2020 general election was "rigged" and that debunked QAnon ideology is perfectly acceptable. Read CityBeat's opinion piece about why Vance is so dangerous.

How Cincinnati’s Lost Concert Venues of the 1950s and ’60s Played a Role in Shaping Music History
Some of the most exciting figures in popular music made their mark on the Queen City, long before they became household names. In fact, a new book by local journalist Steven Rosen says, Cincinnati was at the very center of music's clashing cultures. Read CityBeat's story about the long-lost venues that cemented Cincinnati's place in history.

26 Over-the-Top Eats from Cincinnati Restaurants Sure to Satisfy Your Munchies
Who's hungry? National stoner holiday 4/20 came and went in a puff of smoke this week, and Cincinnati residents found plenty to munch on. From a breadstick the size of your arm to a s'more made with donuts, to an eight-pound 6-way, the Queen City has royally gnarly eats. See CityBeat's photos of extreme, drool-worthy dishes for those special moments, holiday or not.