Olympians named Simone had a great week; all eyes were on Trump Tower as a man scaled the building; Swedish Fish-flavored OREOs? 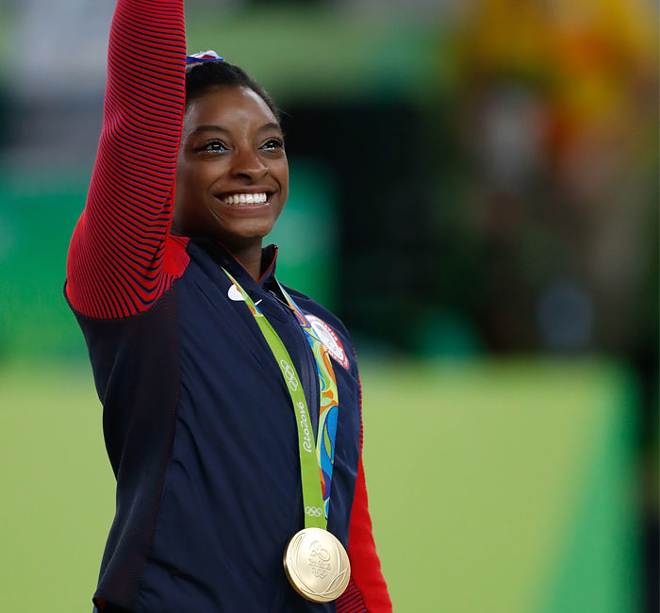 All eyes were on Trump Tower last week when a man scaled the building, climbing for more than two hours before police finally isolated him and pulled him in through a 21st-floor window. Usually when people take over corporate buildings it’s in some kind of protest — lookin’ at you, Greenpeace — but this stunt was actually a demonstration of Trump support. The climber turned out to be Virginia teen Stephen Rogata (government name: Michael Joseph Ryan), who had posted a creepy video on YouTube detailing his intentions to draw attention to the Trump campaign. Oh, and he reportedly has a history of running away from home after fights with his parents over his incessant blogging on U.S. government. So, like most teens that have ever had their internet privileges taken away because they’ve become obsessed with their political conspiracy theory blog, Rogata/Ryan waited until his parents were out of the country, grabbed some rappelling gear, hopped in his Honda Accord and took off to the Big Apple. What can’t be ridiculed, however, are his mad climbing skills. Dude had some crazy suction cup apparatus straight out of a comic book villain’s arsenal. And you thought cupping was just big with Olympic athletes and Gwyneth Paltrow.

Can we just be done with Snapchat now? The image-sharing platform briefly introduced a feature this week that many believe perpetuated offensive Asian stereotypes — aka a yellowface filter. This is some Mickey Rooney in Breakfast at Tiffany’s level shit: The face-morphing lens created the illusion of slanted eyes and eyebrows, a rounded, blushing face and goofy buckteeth. Snapchat’s defense? The filter was inspired by anime, although the Japanese style of animation typically features large, round eyes. A shocking release from the app that offered a skin-darkening Bob Marley filter on 4/20.

The true crime genre continues to take over, with MTV giving a show to a man wrongly imprisoned for 10 years and CBS cracking the JonBenét Ramsey case back open. The only thing American audiences love more than recounting, in vivid detail, the murder of another human being is when the events of these shows and podcasts spill into real-life current events. Serial’s Adnan Syed is awaiting a new trial; The Jinx’s star Robert Durst, in jail for gun charges in New Orleans, is about to be transferred to a California prison to await the Susan Berman murder trial; and now, a development in one of the Making a Murderer cases. A federal judge overturned Brendan Dassey’s case Friday in an epic move for armchair detectives everywhere. In case you yourself were behind bars last winter (the only viable excuse for not knowing the plot of Making a Murderer), the series followed Steven Avery, a Wisconsin man wrongfully convicted of rape only to be released and arrested two years later for the murder of a photographer. A major part of the prosecution’s case in the latter trial centered on Avery’s nephew Dassey’s coerced confession — one this judge ruled to be involuntary. The state has 90 days to retry Dassey, or he will walk free after almost a decade. Could this mean good news for Nasir Khan in the Andrea Cornish case? The Night Of is a documentary, right?

In a millennial twist on fireside chats, President Barack Obama has begun using the White House’s Facebook messenger to better connect with people across the country. Apparently Obama starts every day reading 10 of the thousands of letters sent to him by the American public, and since gifs just don’t translate well over print, you can now straight up I.M. the president of the United States. So what would you chat about with Obama? You could ask him about the time he and Hillary founded ISIS (peep New Girl creator Liz Meriwether’s New Yorker piece for an amazing account of that night), or who he thinks should play him on Saturday Night Live now that longtime impersonator Jay Pharoah won’t be returning to the show. Some other options: What do you eat on your cheat day? Are you going to start smoking cigs on the down-low once you’re out of office? We won’t tell Michelle.

OREO cookies with a Swedish Fish-flavored center are a thing, and they’re rolling out at Kroger stores across the city and country this week. Between this and Taco Bell testing Cheetos burritos in the Queen City (thanks for previewing that for us, Business Courier), Cincinnatians clearly have their fingers on the pulse of the culinary scene.

This week in cat news: New York’s Algonquin Hotel hosted its 10th-annual cat fashion show this weekend. The historic hotel has boasted a resident feline since the 1930s, and current HBIC Matilda III watched over the event as others paid tribute on the catwalk to some of the many stars that stayed at the Algonquin over the years — the theme of the night: Through the Decades. Not too far away in Pennsylvania, a four-eared feline was quickly snatched off the market after the Western Pennsylvania Humane Society made him available for adoption. The genetic mutation that results in an extra set of ears has local roots — it was first documented in Ohio in 1938. Ah, the buckeye state: producing astronauts and mutant cats since the 1930s.

Rio Rundown: The Olympics continue through Aug. 21, and the U.S. teams are raking in gold like Scrooge McDuck. Olympians named Simone had a great week, with Biles and Manuel killing it in gymnastics and swimming, respectively. Michelle Carter became the first U.S. woman to win gold in shot put. Becoming a dad apparently gave professional merman Michael Phelps superpowers because he’s performing even better than in 2012. And Middletown’s Kayla Harrison won gold in Judo. USA! USA! But it hasn’t been all spandex and gold medals. Safety concerns continue to intensify in Rio as it’s being reported that Ryan Lochte and three other swimmers (sorry guys, it pays to be a douche with a catchphrase when it comes to name recognition) were robbed in Rio — no, not like snubbed, but actually held up at gunpoint by people posing as police officers. Is everyone OK? Jeah. No word on whether Lochte’s irritating seafoam hair made them a target.