The Cincinnati Zoo & Botanical Garden opened Hippo Cove, a 70,000-gallon pool with a 60-foot viewing window; John Travolta is set to star in a John Gotti biopic filmed in Cincinnati this summer and more. 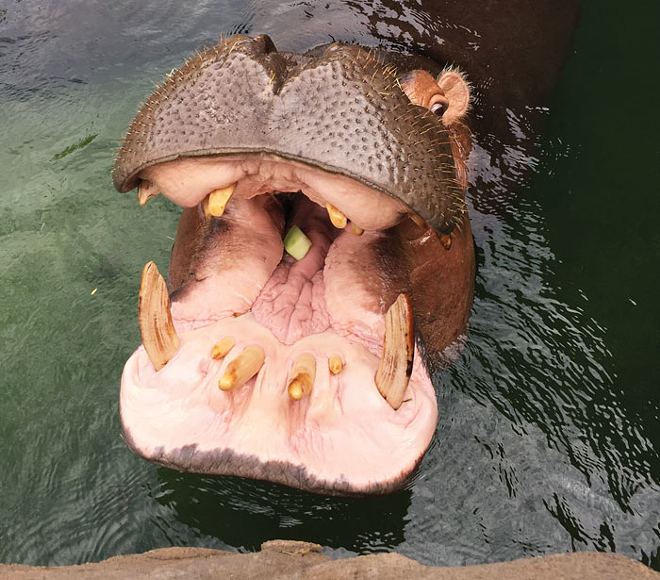 This week in “That Escalated Quickly”: Sunday’s episode of Keeping Up with the Kardashians touched on Taylor Swift v. Kanye West: Part XVI, the dispute over her shout-out in his song “Famous” back in February. (“I feel like me and Taylor might still have sex/Why? I made that bitch famous.”). According to Ye, Taylor approved the reference and OK’d the entire thing. But Swift’s squad claimed Kanye only reached out to ask Tay Tay to tweet out the single, and she knocked him for the misogynistic lyrics. In the episode, it was inferred that Tay Tay lied about not knowing about the song — Kanye actually did call her, ran the line by her and recorded the conversation, as he films all studio sessions. After the episode aired, Kim posted the evidence on social media, prompting all of Hollywood to pick sides. So our choices are Taylor Swift or Kanye West? Why is everything starting to feel like the 2016 election?

Nerd Prom, Geek Pride Week, the Peter Pan Syndrome Symposium — whatever you want to call it, San Diego Comic-Con took place July 20-23, bringing thousands of fans to the annual pop culture mecca. Audiences enjoyed fewer film teasers than in previous years due in part to movie studios’ concerns over leaked footage. But there were plenty of juicy morsels to whet our entertainment palettes. Of note: New seasons of The Man in the High Castle, Sherlock and The Walking Dead were previewed along with The Lego Batman Movie, Wonder Woman and Justice League trailers; Brie Larson was revealed to play the titular role in Captain Marvel while Rihanna will portray Marion Crane — Norman Bates’ most infamous kill — in the show Bates Motel; a Blair Witch Project sequel was announced; and the dream of the ’90s was alive thanks to the prevalence of Pokémon Go, the upcoming Power Rangers movie, a pop-up Double Dare event complete with host Marc Summers and a TV movie reboot of Legends of the Hidden Temple, coming to Nickelodeon this fall.

The dream of the ’90s, however, is dead for Yahoo!. Verizon bought the exclamatory tech company — worth $125 billion at its peak in 2000 — for $4.8 billion. Meanwhile, former “Verizon guy” Paul Marcarelli from the iconic “Can you hear me now?” commercials must have just gotten out of his non-compete because dude has switched sides. Paul can be seen hawking Sprint in ads now, putting him in the running for biggest fuckboi of 2016. Also, the word “iconic” can officially be laid to rest.

The Cincinnati Zoo & Botanical Garden opened a $7.5 million hippo exhibit this week, putting the majestic giants on display there for the first time in 20 years. Hippo Cove, a 70,000-gallon pool with a 60-foot viewing window, is now home to 17-year-old Bibi and 34-year-old Henry. We can only assume this is an effort to squash some of the Harambe clapback. In case you forgot (you were supposed to #neverforget), Harambe was a 17-year-old silverback gorilla that was shot and killed at the zoo in an effort to save a child that fell into his enclosure earlier this spring. To make a difficult situation even worse, many blamed the child’s mother for Harambe’s death, prompting a witch-hunt by Perfect Parents of the Internet (she was not found to be negligent and no charges were filed against her). Today, Harambe lives on in absurdist memes, becoming something of a mascot for internet trolls who mock social justice warriors by calling for “dicks out for Harambe.” The gorilla is frequently roped into conversations about various hot-button issues, to rarely humorous, often offensive, generally racist effect. It’s only a matter of time before #HipposForHarambe takes off.

Aretha Franklin performed with the Cincinnati Pops Sunday at Riverbend. The Queen of Soul powered through one of the hottest days of the year, performing alongside conductor John Morris Russell and the Pops orchestra. Franklin is a real trooper when it comes to local performances — she came to Cincy 15 years ago for the Cincinnati Jazz Festival (which became Macy’s Music Festival and, now, the Cincinnati Music Festival) — the same year of the civil unrest in OTR, which caused many performers to back out. Ms. Franklin came through. ’Cause she slays.

The Democratic National Convention kicked off today in Philadelphia amidst mucho drama. Nearly 20,000 emails from the Democratic National Committee’s server were stolen and released by WikiLeaks in the days leading up to the convention. The biggest news coming out of the leak seems to confirm what Bernie Sanders supporters have believed all along: The DNC wasn’t feeling the Bern. In fact, top party officials favored Hillary Clinton and took measures to suppress Sanders’ campaign. DNC Chair Debbie Wasserman Schultz eventually resigned amid the controversy. But the most interesting nugget revealed in the leak concerned none other than professional sexy baby Ariana Grande. The high-pony enthusiast was pulled from performing at the White House after that donut-licking/America-hating scandal last summer — the same one that supposedly ousted her from playing at the MLB All-Star Game here in Cincy (Demi Lovato, another Pop-singing Disney export, performed instead). Finally, Clinton announced her veep pick as Tim Kaine, who’s quickly becoming the Ann Veal of this election. In the words of Michael Bluth, “Who? Him?”

John Travolta is set to star in a John Gotti biopic filmed in Cincinnati this summer. His real-life wife Kelly Preston and daughter Ella are set to co-star as the infamous mobster’s wife and daughter, respectively, while E from Entourage, Kevin Connolly, will direct. The Life and Death of John Gotti has been in motion for more than five years, previously under the title Gotti: In the Shadow of my Father, and is on its fourth director. Travolta — who was for some reason recently nominated for an Emmy for his exquisitely bronzed and ’browed performance as Robert Shapiro in The People vs. O.J. Simpson: American Crime Story — was spotted this weekend on the West Side, getting fitted by Price Hill tailor Peppe Ramundo.