We need to talk about the #RealIsRare hipster diamond commercials on TV; Michiko Kakutani is stepping down from the 'New York Times'; your next Bloomin’ Onion® could cost you your soul. 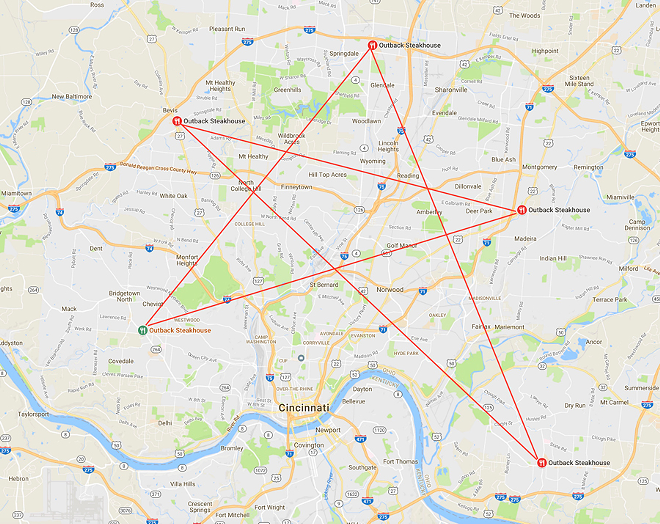 Photo: Satan
Your next Bloomin’ Onion® could cost you your soul.

While Uber offers food delivery in many cities, Lyft has changed the ride-sharing game by teaming up with Taco Bell. Much like how many Lyft users request service after a night of drinking, T-Bell’s consumers are largely made up of intoxicated individuals. Available for a limited time in Orange County, Calif. the next couple of weeks, Lyft riders can request “Taco Mode” and a driver will pick them up and take them to the nearest Bell. These cars — outfitted in a special taco-themed vinyl wrap (talk about employee commitment) — are filled with Taco Bell swag and feature in-car menus for ordering. The fast food joint even offers free Doritos Locos tacos for “ride-through” orders, because why not add another brand into this cross-promotion fiesta? Taco Mode will roll out nationwide next year if all goes well.

Larry David might be the biggest Bernie Bro of all time, because it turns out the comedian is actually related to Sen. Sanders. David was the perfect stand-in for Bernie Sanders on Saturday Night Live, culminating in the genius mashup sketch, “Bern Your Enthusiasm.” “They laugh alike, they walk alike, at times they even talk alike…” Patty Duke Show, anyone? No? Well it turns out David was a prettay, prettay, prettay good choice to play Sanders because they’re cousins — “identical cousins all the way!” David discovered the familial connection while filming an episode of PBS’ genealogy series, Finding Your Roots with Henry Louis Gates Jr., he revealed (prematurely) at a Television Critics Association event this week. The two have a lot in common: They are both in their 70s, born and raised in Brooklyn, N.Y. and take zero shits from schmohawks. Plug: Curb Your Enthusiasm returns to HBO next month. We smell a cameo!

Scathing book and movie critic Michiko Kakutani is stepping down from the New York Times after 38 years. Kakutani often wrote her reviews from the perspective of a character (her review of The Catcher in the Rye came from the perspective of Holden Caulfield), but she was mostly known for dropping the sickest burns of all time. She called Bill Clinton’s 2004 book My Life “sloppy, self-indulgent and often eye-crossingly dull,” Susan Sontag’s Regarding the Pain of Others “belated and common-sense statements of the obvious” and David Foster Wallace’s Infinite Jest “a big psychedelic jumble of characters, anecdotes, jokes, soliloquies, reminiscences and footnotes, uproarious and mind-boggling, but also arbitrary and self-indulgent.” Thus, her reputation led to the verb-ization of her name: “getting Kakutani’ed,” and she was frequently referenced in pop culture, from Sex and the City to Girls. But the cutting columnist received her share of harsh critiques as well. Wallace once referred to Kakutani as “a very charming Japanese lady from the New York Times,” while author Norman Mailer called her “a one-woman kamikaze (who) disdains white male writers.” Problematic much?

Can we talk about the #RealIsRare hipster diamond commercials on TV? They’re basically a direct response to the report that millennials aren’t buying diamonds, a.k.a. Things Millennials Killed No. 46. The edgy, ethereal and oh-so-Instagrammy ads featuring cooler-than-Kay-Jewelers couples come from the Diamond Producers Association trade group. It’s basically a PSA to trick 20-somethings into over-valuing an arbitrary stone! The commercials highlight diverse ~real~ couples — including two women in the latest one, #representation — frolicking around with narration like, “I don’t know if I believe in the institution of marriage, I don’t know if we’re gonna be together forever but I do know that I love you…” The DPA’s slogan is, “Real is Rare. Real is a Diamond,” but we think they should get really real and just change it to “Even though I’m woke, I still expect a fucking diamond.”

New Jersey Governor Chris Christie was at a Cubs-Brewers game in Milwaukee Sunday when he began to get heckled by the crowd. When one Chicago fan told him he sucked, Christie got all up in his grill, calling dude a “big-shot.” This isn’t even the first time he’s been booed at a baseball game this month: Just last week, Christie drew the ire of a crowd at a Mets-Cardinals game after catching a foul ball. This week’s intense (?) moment — predictably caught on camera for all to see — became an instant meme, and one element stood out: the gigantic clear bowl of nachos he clutched while yelling at the guy. Even when Chris Christie causes a scene, pants hiked up to his tits, his snack choice always manages to steal the spotlight. Last year we saw him pouring one package of M&Ms into another package of M&Ms, and between 2010 and 2011 Christie reportedly spent $82,000 on concessions at MetLife Stadium.

So this is turning into a junk food-heavy week but, real talk: Does Outback Steakhouse have satanic ties? Not unless the devil loves a Bloomin’ Onion®! Web sleuths revealed many cities’ Outback locations form a pentagram when connected on a map, and Cincinnati is no exception. In all fairness, it’s super easy to pick five random locations of a chain restaurant and connect into a star. Outback joked about the conspiracy theory on social media, saying its only plot is to bring Aussie-inspired steaks to the masses. OK, then why is the restaurant now promoting Wiccan Wednesdays?

This week in questionable decisions: After Trump tweeted about a potential ban on transgender people in the military, The Washington Post revealed that the Pentagon spends five times more on Viagra than transgender medical services; Tomi Lahren admitted to benefitting from Obamacare during a debate with Chelsea Handler at Politicon; the St. Louis Cardinals hosted “Christian Day” at Busch Stadium; 12 inmates used peanut butter to escape an Alabama jail; and Snopes might die in a messy legal battle over a contract dispute. It would make sense that a fact-checking site would meet its demise in these times of #fakenews.