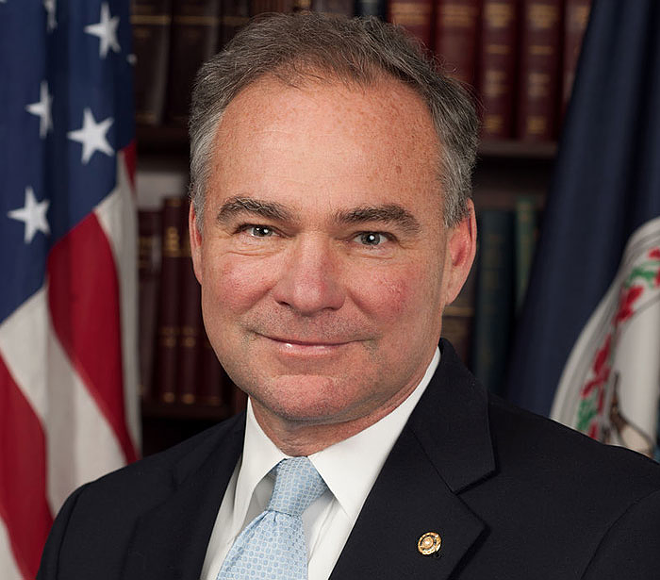 People are really confused by Hillary Clinton’s running mate Tim Kaine. This week, the North Carolina GOP condemned him for wearing a Honduran flag lapel pin and not an American flag while speaking at the Democratic National Convention (Kaine did missionary work in Honduras in 1980). The only problem was that the pin was actually a Blue Star Service pin — which bears little resemblance to the Central American country’s flag — in honor of Kaine’s son, a deployed Marine. Then you’ve got Donald Trump, who some say mixed up the Virginia senator with similarly named former New Jersey governor Thomas Kean. There’s a lot of white men out there with the initials T.K., so, for clarity’s sake, here is a list of people who are not Tim Kaine: Taylor Kitsch, who played Tim Riggins in Friday Night Lights; Ted Kennedy — was a politician, but he died like 7 years ago; Todd Kraines, Kim Kardashian’s kousin; Tony Kushner, playwright behind Angels in America; and Toby Keith, Country music star, lover of bars (and grills).

For journalists interviewing celebrities, there’s a fine line between a question that could elicit a golden nugget of a sound bite and one that will send the interviewee off the rails. This week Jean-Claude Van Damme proved this when he lost his shit on an Australian morning show. JCVD was doing satellite interviews from Bangkok when one reporter asked about his relationship with Street Fighter co-star Kylie Minogue. Presumably JCVD is trying to move beyond the title “’90s action star” and did not want to talk about 1) an affair that 2) went down 20 years ago and went off on the reporter, storming out of the studio. Pro tip: That’s when you ask about their recent charity work.

A pop-up museum of ice cream opened today in Manhattan’s Meatpacking District, celebrating the quintessential summer treat with sundae-inspired artwork and installations, including a swimming pool filled with sprinkles. It’s a made-for-Instagram attraction — what cuter backdrop for a foot selfie than an endless abyss of rainbow sprinkles? But also: What is more disgusting than standing in New York City heat for two hours to dip your toes in a life-sized candy dish that’s already seen 500 pairs of feet?

Speaking of hundreds of feet, professional skydiver Luke Aikins set out to free-fall 25,000 feet for a live TV event on Fox Saturday. Aikins, who’s completed 18,000 jumps and performed stunts on Godzilla and Iron Man 3, was almost forced by a union to jump with a parachute because the stunt was deemed too unsafe. Moments before he leapt from the plane, he was given the OK to go without, trusting only a safety net to catch his fall. Of course, Aikins succeeded, jumping sans-chute and plummeting to safety on the gigantic net. Unfortunately, the happy ending was anticlimactic for audiences. After growing so accustomed to seeing fictional TV characters we love get mauled by zombies or beheaded in medieval court, we have officially developed a thirst for blood IRL.

Andrew Lloyd Webber’s musical Cats is back after 16 years, opening Sunday on Broadway. Oh, and local angle: The production features choreography by Cincinnati native Andy Blankenbuehler! Everything ever created is getting revived and remade these days, but this actually makes sense. Everyone knows cats are the spirit animal of the internet age. And all of the Cats characters wear leggings, not unlike half the population today.

While rumors about a Harry Potter version of Pokémon GO remain unsubstantiated, fans in need of a fix are in luck with the release of Harry Potter and the Cursed Child, the eighth story in the Potter universe that hit shelves and the stage this week. The two-part play takes place 19 years after the events of Deathly Hallows and follows Harry as a Ministry of Magic employee and father to Albus Severus Potter. The play is said to be very entertaining, according to the three people that weren’t distracted trying to catch the Magikarp in the theater.

Laguna Beach and The Hills were at the center of the soapy, semi-scripted “reality” show storm of the early 2000s. Ten years later, star Lauren Conrad promises fond memories and juicy secrets from the oft-mocked show in The Hills: That Was Then, This Is Now. We can’t speak to those surely revelatory details because this piece went to press before the special aired, but here’s what we know about the cast today: LC married a dude from Simple Plan Something Corporate, wrote some YA novels, has a clothing line at Kohl’s and, in the footsteps of many basic betches before her, runs a pretty successful “lifestyle brand.” Heidi Montag is living out her days in a wax museum. Just kidding, she and Spencer Pratt are surprisingly still married and unsurprisingly still getting reality TV checks. They experienced financial hardship due in part to Heidi’s plastic surgery obsession and Spencer’s $1 million crystal collection. Finally, Kristin Cavallari married Chicago Bears quarterback Jay Cutler and had three kids. She is also something of a lifestyle authority, speaking out against the evils of vaccinations, cow’s milk, GMOs and, above all else, da-rama.