Fiona isn't the only baby hippo in town (and by 'in town' we mean across the globe); a bunch of celebrities got secret-married; Britain plans to hand the European Union its two-year notice next week. 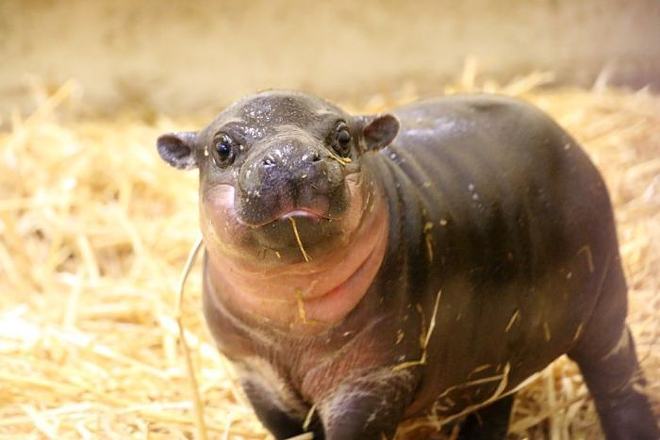 ICYMI: All the celebrities got secret-married! Several famous couples recently tied the knot on the down-low and this week they all decided to announce it. RuPaul ru-vealed on Hollywood Today Live that he and his longtime boyfriend, an Australian rancher (get it!), got hitched in January, “really for tax breaks,” he said on the show; Dave Franco, James’ baby bro, and actress Alison Brie married on the hush at some point recently; Broad City’s Ilana Glazer and her guy, a scientist she met at NYU, wed in a City Hall ceremony last month; actors and soon-to-be-parents Amanda Seyfried and Thomas Sadoski also made it official; and Tyrese married his non-famous social worker bae in a surprise wedding on Valentine’s Day. Whew! Celebrity marriages are a sacred bond known to last a lifetime. Congrats to the happy couples on making what we’re sure will be a permanent commitment.

Government cannabis is some straight-up shake. Dirt weed. Seeds-n-stems. Whatever you call low-grade bud, that appears to be what the feds give researchers for scientific testing. A researcher studying the effects of medical marijuana on veterans with PTSD is speaking out about the realities of cannabis studies: The stuff the government distributes for research resembles the baggie of dried-up kitchen herbs you’d buy from an older kid on the school bus more than actual marijuana. And not only does that take away from these scientists’ street cred, but it may be affecting their results. In other weed news, someone accidentally donated nearly four pounds of the stuff to Goodwill in a cooler. Employees of a Washington Goodwill discovered 60 ounces — 59 above the legal possession limit in the state — and called the cops, who are trying to track down its original owner. Maybe cannabis researchers should just scour thrift stores to find proper marijuana for testing.

Ahh, St. Patrick’s Day. Green attire. Booze. Flogging Molly on repeat. This is not just a scene from your local pub; it’s also the Trump administration’s take on the holiday. Festivities kicked off Thursday with a bunch of Paddy fuckery and we’re still shook today. The quick-and-dirty of it: Mike Pence said “Top o’ the mornin’,” Paul Ryan showed off a poorly-poured pint of Guinness, (blasphemy!) and Donald Trump’s longtime favorite Irish saying was carelessly plucked from a Pinterest page of inspirational quotes. When Trump met with Irish Prime Minister Enda Kenny, he read his favorite Irish proverb “Always remember to forget the friends that proved untrue, but never forget to remember those that have stuck by you.” Obviously this is an Irish proverb in the sense that “If you can’t handle me at my worst, you don’t deserve me at my best” is a real Marilyn Monroe quote. Which is to say, FAKE!!! Had it been a true Irish proverb, it would have began with “Always drink to forget…” Even better, it appears to be poem by a Nigerian man whose name alone would lead him to be detained at any American border.

There was no Saturday Night Live on tonight, but major news came this week from the longtime sketch comedy show. The remaining episodes of the season will air live in all time zones for the first time ever, meaning while we’re watching at the regular 11:30 p.m. time, folks on the West Coast can tune in at 8:30. Looking into summer, “Weekend Update” will get the standalone treatment for four weeks in August. There’s also an A-list assortment of hosts lined up for the spring, including SNL alum Jimmy Fallon, Chris Pine, Sean Spicy (typo but it stays) herself Melissa McCarthy and Dwayne Johnson to close out the highest rated season in years. #ThanksTrump

It’s hard out here for a successful white American male actor like Tim Allen. Basically like Nazi Germany. That’s what the Tool Man told Jimmy Kimmel on Live this week, saying “This is like ’30s Germany!” He wasn’t referring to Trump and Hitler’s shared hostility toward foreigners, minorities and the press — he was talking about his difficult experience as a Hollywood conservative. Sounds like he’s being pretty sensitive, right? Someone needs to talk some sense into this snowflake. Where you at, Wilson?

Britain plans to hand the European Union its two-year notice next week, officially starting the Brexit process March 29. How does a country prepare for a breakup after a 40-year relationship? Block the E.U. on all social media, delete its number and burn all their photos together while singing out, “Everything you own in a box to the left…”

Fiona the hippo continues to bring people together in Cincinnati and beyond during polarizing times with her adorable smile, squishy little body and healthy milestones. But there’s a new lil’ hippo in town. And by in town, we mean across the globe. Fiona came into this world prematurely as one of the tiniest hippos of her kind, but she wasn’t quite as small as a pygmy hippo recently born in Australia. Now some are saying this wee unnamed hippo, born at around 11 pounds compared to Fiona’s 29, is stealing our girl’s thunder. Pygmy animals are naturally much smaller than their traditional counterparts, but really, should we be comparing two young girls to determine their value — cuteness? Yet another example of unrealistic beauty standards for women!