Local costumer Jonn Schenz returned to Washington, D.C., Monday to provide the bunny costumes for the White House Easter Egg roll for the 38th time. The trio of rabbit suits could be seen as the First Family hosted an estimated 30,000 guests at the 140th event. You might remember a lot of buzz surrounding the Egg Roll last year: It seemed to be planned last-minute, with few details emerging until the day of. Meanwhile, old photos surfaced of then-White House press secretary Sean Spicer sporting the bunny suit back in 2008. (Secret Service and staffers often don the suits for security reasons.) The Spicy Bunny was made all the more iconic when Melissa McCarthy portrayed him on Saturday Night Live. How times have changed!

And what’s better than the Easter Bunny? A gay bunny who’s trolling Mike Pence. Here’s the story: The vice president has a pet rabbit with an A+ punny name — Marlon Bundo. Pence’s daughter and wife/“mother” wrote a children’s book about him called Marlon Bundo’s Day in the Life of the Vice President, wherein the furry guy shares a day in the life with the veep. When John Oliver got wind of this, he decided to toy with Pence’s straight-as-an-arrow sensibilities by writing his own book about the rabbit, A Day in the Life of Marlon Bundo, wherein the furry guy falls in love with another furry guy in a tale of good ole gay bunny love. All proceeds appropriately went to the Trevor Project and AIDS United. Oliver even got an all-star cast to record the audio version, including RuPaul, Jim Parsons, Jesse Tyler Ferguson, John Lithgow, Ellie Kemper and Jack McBrayer. 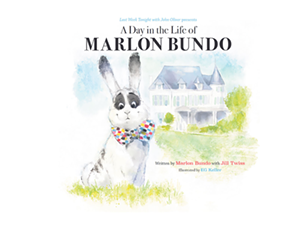 This bunny loves other bunnies.

It quickly became the No. 1 bestseller on Amazon — effectively crushing the Pence-penned book’s numbers. Will & Grace showrunner Max Mutchnick might have had something to do with that: He bought a copy for every elementary school library in Pence’s home state of Indiana. A Day in the Life is currently sold out, but Oliver announced that they’re printing more copies, so Pence can keep clutching his pearls at the idea of THE CHILDREN being exposed to boy-on-boy bunny romance.

Easter and April Fools’ Day collided Sunday, resulting in many Jesus-themed pranks (was that just my household?). It provided an eggcellent hopportunity (sorry) for parents to trick their kids — think junk-filled Easter eggs and baskets, fruits and veggies masked as foil-wrapped candy and Easter egg hunts where someone “forgot” to hide any eggs. Because there’s nothing more satisfying than pranking children on the Lord’s Day.

NBC pulled off a true miracle with its outstanding live production of Jesus Christ Superstar with John Legend and Sara Bareilles. We thought it would fall under joke territory because usually those live shows are a hot mess, but this was just plain hot!

But it was Mother Nature that had the last laugh that night, essentially saying, “Oh, you thought spring was finally here? April Fools!” as the tri-state got sprinkled by an inch or two of snow. That sight had me crying more than the countless children who are consistently terrified by dead-eyed mall Easter Bunnies.

Tiffany Haddish just can’t stop spilling details about the time she met Beyoncé. (But who could blame her?) In case you missed it: The Girls Trip breakout star attended a Jay-Z concert after-party back in December, where she met Queen B and posted a selfie to prove it. (“Strike one,” notes the Knowles-Carter Secrecy Security Force.) Then in February, Haddish started to elaborate on her royal encounter, saying that some famous-type lady was hitting on Jay. Tiff offered to smack a bitch, but she says Bey told her not to worry about it and just enjoy the party.

The details just keep trickling out of Haddish, because now she’s saying that certain someone — whose identity she will not reveal — who was chatting up Jay was on drugs and she bit Beyoncé’s face. Several fellow celebs weighed in saying they did or didn’t know whodunnit while average nobodies tried to crack the case by doing a social media deep-dive of the night in question. Even Ryan Murphy jokingly announced that he’d cover the story in a future season of American Crime Story: Who Bit Beyoncé? All signs point to Love & Basketball actress Sanaa Lathan as the culprit. Meanwhile, Haddish claims she will no longer speak of the incident and she probably shouldn’t have made a peep to begin with because she signed a non-disclosure agreement.

Now, Jay and Bey are famously private people… for a couple that reveals some of the most intimate details of their relationship in song and video while living in the public eye. So they’re probably not too keen on all this chatter — hence the NDA. Haddish better be careful, before she’s name-checked in Beyoncé’s next album as “Becky with the big mouth.”

With the Roseanne revival boasting a whopping 18 million viewers during last week’s premiere, more reboots seem to be oozing out of the woodwork. Netflix debuts its take on Lost in Space April 13. Entertainment Weekly says a third installment of Bill & Ted’s Excellent Adventure will soon be in the works. Amazon is adapting A League of Their Own into a TV series. Charmed is on its way back to screens with a new trio of sisters. And while it’s not a straight reboot, The Golden Girls has inspired a new series about a group of older gay men called Silver Foxes. Everything old is new again!