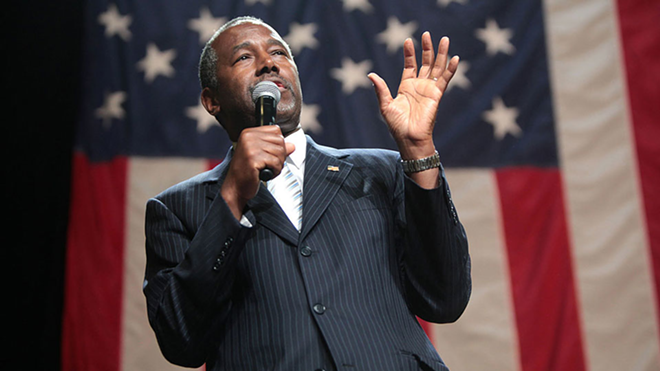 Ken Bone, breakout star of the second presidential debate and costume inspiration for pop culture-savvy Halloween partygoers across America (seriously, you will definitely see at least one “slutty Ken Bone” costume next weekend), continues to bask in the afterglow of his moment in the spotlight. On Twitter Thursday, local restaurateur Jeff Ruby invited Bone and his wife to dine at any of his fine establishments and enjoy an 18-ounce T-bone steak on the house, “with red sweater wine, not MILK” which is either a reference to Michigan football coach Jim Harbaugh, who tweeted a photo from Ruby’s rival Ruth’s Chris Steakhouse that showed him enjoying a steak with a tall glass of milk (unforgivable), or to Charlie’s favorite dish in It’s Always Sunny in Philadelphia (milksteak, boiled over hard). No word yet on whether Mr. Bone took Ruby up on his offer, but speaking of American heroes at Jeff Ruby restaurants, on that same day, the steakhouse’s Nashville location welcomed two: Rob O’Neill, the former Navy SEAL who claims to have killed Osama Bin Laden, and apparent BFF and American Bad Ass Kid Rock.

This week on Snapped: Ben Carson short-circuited on live TV, a Michigan judge jumped the bench to subdue an unruly defendant in court and Alex Trebek straight up called a Jeopardy contestant a loser. When BBC journalist Katty Kay pressed Carson about the abuse allegations against Donald Trump on MSNBC’s Morning Joe, a visibly frustrated Carson flipped, repeating, “Stop, stop, stop,” as Kay continued her line of questions, then told the panel to turn Kay’s mic off. Truly the stuff that Vines are made of.

Meanwhile in our neighboring state to the north, Jackson Circuit Court Judge John McBain found himself dealing with an aggressive defendant in a hearing. McBain hopped off the stand, took off his robe and helped subdue the man, which is the judicial equivalent of asking your friend to hold your purse and earrings.

Finally, legislative librarian Susan Cole appeared on Jeopardy this week, and in her intro she told host Alex Trebek that her favorite musical genre was nerdcore Hip Hop. “It’s people who identify as nerdy, rapping about the things they love — video games, science fiction, having a hard time meeting romantic partners,” she explained. “Losers, in other words,” Trebek jabbed. Savage AF.

You know how every episode of Law and Order: Special Victims Unit starts with the same disclaimer: “The following story is fictional and does not depict any actual person or event”? Well everyone knows that’s just to cover their asses, because the stories are most definitely “ripped from the headlines” and very much rooted in some kind of true story. An upcoming episode of SVU titled “Unstoppable” stars Gary Cole as a wealthy politician whose campaign descends into chaos when several women come forward accusing him of misconduct. The episode’s promo even features Cole’s character saying, “I’m a handsome, charming millionaire. Women throw themselves at me.” That’s right — a Trumpisode. While the episode was scheduled to air Oct. 26, it’s been pulled from the lineup. Trump must have threatened to cancel SVU like he did SNL — The Orange One is not pleased with the sketch comedy show’s portrayal of him, particularly Alec Baldwin’s hilarious impression, calling it a “hit job.” Nevermind the fact that at least half of the jokes are direct quotes.

During a Tidal concert Sunday, Beyoncé’s earring ripped out of her ear mid-song. The alien fembot goddess continued performing, wiping the blood from her ear and thus proving she bleeds, causing the Beyhive to go into frenzy. (The disturbing hashtag #cutforbeyonce was trending.) But we see past the hype. Clearly this was nothing more than a thinly veiled Illuminati bloodletting ritual.

Amidst all that aforementioned insanity that is real life, wouldn’t it be amazing to visit a place where the beer flows like wine, where beautiful women instinctively flock like the salmon of Capistrano? OK, maybe just a place where wine flows like water fountains? In what we imagine is the stuff of school teachers’ dreams, a free wine fountain has opened in Italy. A vineyard in the Italian region of Abruzzo has opened a drinking fountain that serves red wine for public consumption, 24 hours a day. Arrivederci, America!

Luke Perry, the Dylan to our Brenda, celebrated his 50th birthday this week in totally normal fashion by appearing on the cover of AARP Magazine. What’s more shocking: that the teen idol (j/k he was like 30 when he was on 90210) is half a century old, that he looks better at this age than you ever have or that he’s just now identifying as a retired person despite the fact that he hasn’t done any memorable work since 2001?