What Did Rail Transit Look Like in Cincinnati in 1912? Check Out This Incredible Map

Greater Cincinnati's electric interurban rail system once stretched across the region — something designer Jake Berman says many people have forgotten about. 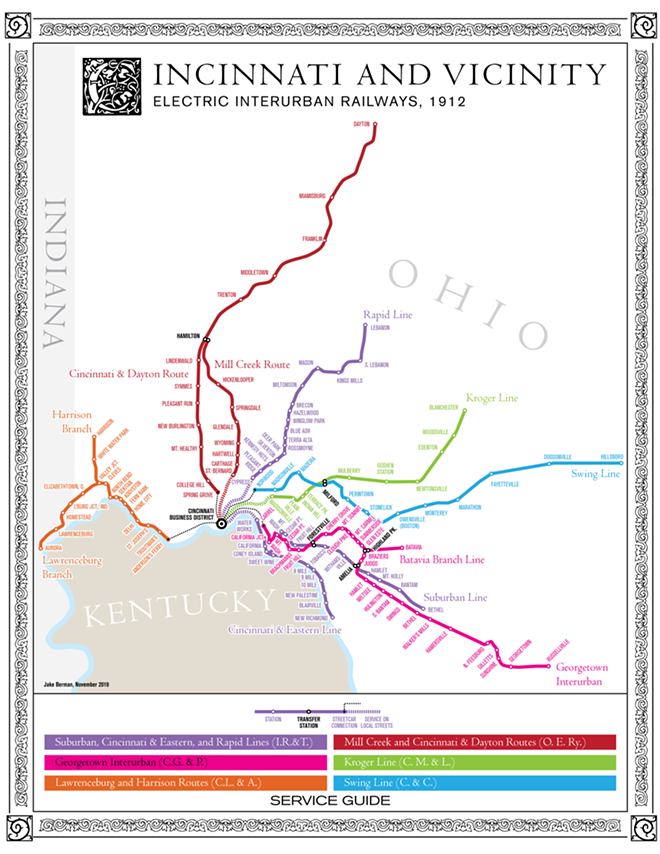 Quick. It's 1912, you don't own one of those newfangled horseless carriages, and you need to get from downtown Cincinnati to Middletown. Also, bad news, your horse is sick.

Don't worry, because actually, there is a pretty robust network of electric interurban rail lines to take you there or many other places you'd need to go in this scenario from more than a century ago.

When we think of rail in Cincinnati now, we tend to think of streetcar lines that squired people about the central city. But our regional inter-urban rail system once had very long reach — something graphic designer Jake Berman wanted to remind people about.

Using "a lot of archival research," including streetcar timetables digitized in various libraries, Berman has reconstructed the interurban system's routes in an expansive, color-coded map he made with Adobe Illustrator.

That map can tell us a lot about the region's transit history — and its present — he says.

"I thought it was timely," Berman says via email about the project. "Cincy has a pretty tortured history of mass transit over the last century, from the still-empty subway tunnels, to Metro Moves in '02, to the streetcar fiasco.  But it wasn't always like this."

Currently, Greater Cincinnati is struggling with an under-funded bus system paid for by a portion of Cincinnati's earnings tax that doesn't provide access to many of the region's jobs, housing and other features. Next year, voters will decide on a .8 percent Hamilton County sales tax levy presented by the Southwest Ohio Regional Transit Authority that would expand service in a number of ways.

"It seems to be a pretty common sentiment that good public transit is for places like New York or Chicago, but it's not something that would ever work in Cincinnati," he says. "...But that's just not true. Cincy is a dense, old metropolis that was largely built around public transit: Terrace Park, Madeira, and Hyde Park, to name a few, are all neighborhoods that were built because of the streetcar."

Horse-drawn streetcars were prevalent in the city as far back as the 1840s. By the early 20th century, circa Berman's map, electric-powered streetcars were carrying thousands around the region. During World War II, more than 400,000 people a day were riding them into downtown or out into far-flung suburbs and other cities.

Eventually, the rise of the automobile caught up with most passenger rail service, and the city's original system made its last run in September 1951.

Berman's map also provides a glimpse into the history of the region beyond its transit network. These days, you probably don't hear much about places called Rossmoyne, Terra Alta, Hickenlooper, Swings and other spots. You can't get to some of the stops on the rail map at all unless you have a train that time-travels.

"Many towns listed on the map don't exist anymore or they've changed names over the past century," Berman notes.

You may remember Berman's maps of public transit projects Cincinnati never finished — the subway system and the 2002 Metro Moves plan voters batted down — which we wrote about here.

He's currently working on a book featuring many of the maps he's made for cities around the country, including maps of Detroit's streetcar system circa 1950, a 1997 monorail proposal in Seattle, Cleveland's Electric Interurban Railway circa 1898 and a number of others. In the meantime, you can find them on his website here.

"I've been pleasantly surprised by the response from the public," Berman says of his Cincinnati map. "The most common response I've gotten is 'I didn't know we had that,' followed by 'why'd we get rid of it?' "