What Does 'Affordable' Mean When it Comes to Housing in Cincinnati?

With all the recent discussion about housing, things can get complicated. Here is a crash-course on what constitutes "affordable" housing in Cincinnati. 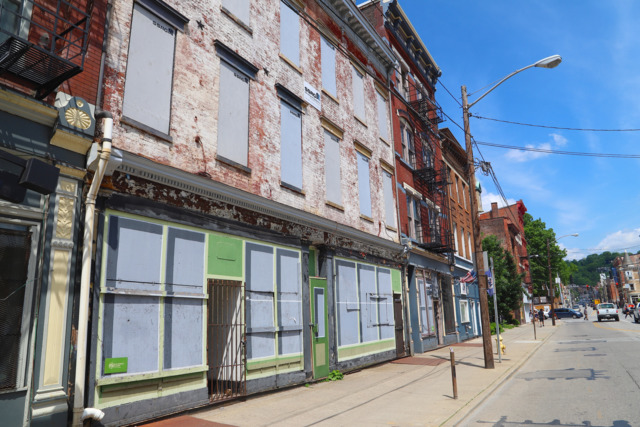 This story is the second in a series on housing insecurity in Greater Cincinnati. You can read the first part of the series here.

Over the past few years, Greater Cincinnati's need for more affordable housing has gotten increasing media coverage and attention from local elected officials.

And it seems somewhat clear — rents have increased and research shows large gaps between the number of available rental housing units and area residents, especially those with low incomes, looking for housing.

CityBeat has written a number of stories about the impact that gap has had on Cincinnatians.

But in all the discussion about housing, things can get complicated. Federal and local subsidies for housing are riddled with acronyms and formulas that can be confusing at first glance. And some housing advocates say not all housing that is called "affordable" by those metrics directly addresses the needs recent research has suggested are the most pressing in Cincinnati and Hamilton County.

To that end, here is a crash-course for what constitutes "affordable" housing here.

What Does "Affordable" Mean?

First, a baseline: The federal government considers housing affordable when a person or family is spending no more than one-third of their income on rent or a mortgage plus utilities. Spending more than that — as about 44,000 lower-income families in Greater Cincinnati are doing, according to research by LISC Greater Cincinnati and Xavier University's Community Building Institute — means that family is "cost burdened" by the federal government's standards.

More than one in four Cincinnati households is below the federal poverty line — that's about $13,000 a year for a single person or $21,000 for a three-person family with one child as of last year — and those families generally can't afford housing at Cincinnati's Census-measured median rent of $709 a month. Instead, rent for a single person at that level that is affordable comes in at about $325 a month.

• AMI, or Area Median Income, is the measure of what the median household makes in a county or metropolitan area. See below for a chart of Greater Cincinnati's AMI.

• CMHA, or the Cincinnati Metropolitan Housing Authority, is the agency that administers public housing in Greater Cincinnati. It provides roughly 5,000 units housing 10,000 people with incomes below 50 percent of the area's median income.

• LIHTC, or Low-Income Housing Tax Credits, are issued by the federal government through the Ohio Housing Finance Agency to fund the construction – but not ongoing operation — of affordable housing built by private developers. Those developers compete for those credits and agree to keep their developments affordable at a certain  level — generally between 30 and 80 percent of the Area Median Income — for at least 15 years. OHFA also runs other programs — such as the Ohio Housing Trust Fund — that fund affordable housing for low and moderate-income people.

• NOFA, or Notice of Funding Availability, is a competitive twice-yearly program the City of Cincinnati uses to award funds to developers for affordable housing and other development projects.

• OHFA, or the Ohio Housing Finance Agency, is the state agency responsible for funding affordable housing and administering federal tax credits for it.

• Section 8 is a program that allows low-income residents the opportunity to choose their rental housing, so long as a landlord accepts the vouchers issued by HUD for housing. CMHA administers about 11,000 Section 8 vouchers in Greater Cincinnati. Some Section 8 vouchers are also attached to specific buildings instead of residing with tenants.

Where Does Affordable Housing Come From?

Some housing is what is called "naturally affordable" — that is, the market dictates rents that match up with the incomes of people in the area who need housing. That kind of housing, however, has decreased in recent years — either due to rising rents or disinvestment that has left it vacant or in an unlivable condition.

There are a number of programs that seek to address the gap in "naturally affordable" housing nationally and locally.

The U.S. Department of Housing and Urban Development (HUD) funds both public housing through the Cincinnati Metropolitan Housing Authority (which operates about 5,000 units housing 10,000 people) and subsidized housing owned by private landlords through the Section 8 program (which serves about 11,000 people in Greater Cincinnati).

Both of these programs have long waiting lists — when the waiting lists are open — and have seen decreases in funding over the last three decades. The programs have their own income maximums — generally 50 percent of the area's overall median income, or about $26,000 a year for a single person — that decide who is and isn't eligible for these forms of subsidized housing.

There is another way the federal government tries to partner with the private market to provide affordable housing — the Low Income Housing Tax Credit (LIHTC) program. These tax credits, paid for by HUD and administered by the Ohio Housing Finance Agency (OHFA), are available on a limited, competitive basis for developers across the state each year. Developers who win them use them to attract investors — generally, corporate entities that pay somewhat less than face value to use the tax credits upfront so they can reap longer-term tax savings. In return, developers get about 70 percent of the capital they need to construct — but not operate over the long-term — affordable housing.

Cincinnati also administers some federal dollars it puts toward subsidized housing projects through a process it calls Notice of Funding Availability. NOFA can be used to close financing gaps in affordable projects funded by things like LIHTC and is also used for some projects without affordability benchmarks that the city determines are beneficial and would not otherwise happen without city help.

How Affordable is "Affordable" Housing? It Depends

When they compete for and win LIHTC or certain NOFA funding, developers agree that the housing they build must remain affordable for at least 15 years at an agreed-upon level that is determined by a measure called "Area Median Income," or AMI. This is where things can get tricky.

HUD uses the U.S. Census Bureau's measurement of AMI for counties and metropolitan statistical areas (MSA) like Cincinnati. HUD generates Area Median Income measurements for various household sizes. AMI for a single-person household in Greater Cincinnati, for example, is about $57,000 a year.

There is another set of benchmarks associated with more moderate to middle-income earners called "workforce housing," occasionally called "workforce affordable housing." Those projects are generally between 80 percent AMI and 120 percent AMI — units that can go as high as $1,500 a month for a single person, using HUD's 30 percent of income metric.

Do Local Efforts Match the Need?

The 2017 Community Building Institute/LISC Greater Cincinnati study identified a need for roughly 25,000 units of housing in urban areas in Hamilton County (mostly Cincinnati) affordable for people making under about $15,000 a year or less — that is, less than 30 percent AMI or near federal poverty guidelines. That gap grows much smaller as income goes up.

While much of Cincinnati's housing gap is toward the bottom of the income range, a number of recent affordable projects in Cincinnati have tended toward the middle and upper ends of HUD's AMI range. Of the 11 projects partly funded by the city's NOFA process over two rounds in 2019, for example, only two  contained units at 30 percent AMI. One, the Arts Apartments, contained existing, not new, units. The other, Perseverance in OTR, has four of its 32 units at 30 percent AMI, while the rest are at higher price points.

Of the rest of the NOFA-funded projects, 80 units were funded at around 60 percent AMI (about $850 a month for a single person) and another 37 were funded for households making 80 percent AMI. NOFA also funded the construction of four houses in Madisonville for homeowners making 120 percent AMI in the last round of funding.

Most recent projects using LIHTC have at least some 30 percent AMI units, though generally they are a small percentage of the overall project. And other projects with complex financing have been aimed at helping some of the city's lowest-income residents. The recently-opened 821 Flats in the West End offers 57 units of permanent supportive housing for those who have experienced homelessness. That project leveraged LIHTC, city and county contributions and private financing. That housing is badly-needed, advocates say. But permanent supportive housing is a very specific kind of affordable housing that doesn't meet all the city's housing needs for the many Cincinnati residents living well below the region's area median income.

Using AMI as a gauge is a problem in and of itself, some affordable housing advocates suggest. That's because there is a big mismatch between the overall median income of the entire metropolitan area — including much wealthier suburbs — and the city itself, including some of its historically low-income neighborhoods where housing is being built.

For example, median income for one person in the entire metropolitan area is $20,000 higher than it is in Cincinnati, and HUD's 60 percent AMI level for the metropolitan area is well more than double the $15,000 median household income found in neighborhoods like the West End. So housing considered "affordable" by that area-wide measure may still be far more than residents in some communities can pay.

What is the City Doing?

In past years, Cincinnati has lagged Ohio's other major cities when it comes to developer applications for LIHTC, the federal housing tax credits. But that seems to be changing. As developers compete for and win more of those credits, it could help ease the affordability crunch.

Other cities have taken that route. Last  May, Columbus voters approved a bond issue that will generate $50 million for affordable housing, Franklin County paid $17 million into the fund, and private investment from banks and other corporations poured $100 million into another fund for affordable housing. Cincinnati's trust isn't well-funded yet, but a program called VTICA that gets contributions from developers who receive city tax abatements could slowly fill those coffers. Activist groups have pushed Cincinnati to fund affordable housing at levels similar to Columbus, even promising a ballot initiative to do so.

The city's Department of Community and Economic Development (DCED) has argued that housing is needed at all levels, and that developing market-rate housing at higher income levels will take the stress off the housing stock at more affordable rates below. Without middle-income and higher-income housing, the logic goes, households at those income levels will simply offer more for housing that would otherwise command lower rents.

But there are limits to this logic, according to academics and DCED itself. In a study generally supportive of the idea that increasing market-rate housing supply overall will increase affordability, researchers with the W.E. Upjohn Institute for Employment Research wrote:

"Because the private market will not provide housing at below marginal cost, market-based strategies may not lower prices in neighborhoods with already very low prices. Alternative policies that either lower the cost of provision or subsidize incomes are likely necessary to improve affordability in such areas."

DECD does acknowledge that subsidy will be required for housing affordable to the city's lowest-income residents and makes recommendations for increasing that kind of housing, including expanding the city's applications for federal Low-Income Housing Tax Credits, marketing the city's recently-created federal Opportunity Zones for affordable housing development and other measures.