What led to Kyle Plush's death? 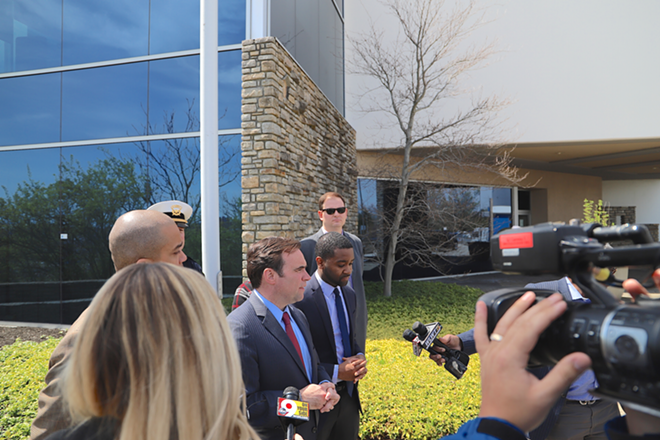 Sixteen-year-old Kyle Plush went into his van the afternoon of April 10 to get some sports equipment and never came out alive.

His suffocation after the van’s third-row seat tipped over on him has rippled through Cincinnati, sparking a long, anguished Cincinnati City Council meeting last week and seemingly providing the last straw leading to the exit of Cincinnati’s embattled city manager.

Plush called 911 twice while he was pinned under the van’s bench seat, presumably using his phone’s voice-activation feature. But Cincinnati Police officers didn’t find him when responding to his initial call — possibly because they never exited their cruiser — and a Hamilton County Sheriff’s deputy on the scene also couldn’t locate him.

Plush’s death has left a number of questions: Did he die due in part to continued dysfunction at the city’s emergency call center, where understaffing and management issues have been the subject of a dozen city memos over the past few years? Or was it simply the result of a very unfortunate series of events?

A dozen memos from the city manager and others stretching back to 2014 detail the call center’s staffing shortages and technology issues, which led to outright outages of the city’s 911 service, among other problems. Mayor John Cranley and several council members said they were unaware of the severity of the issues, despite receiving the memos.

“We have never heard that before,” Cranley said of the staffing shortages. “I was unaware that we had these deficits.”

The emergency meeting was designed to get to the bottom of what role the call center played in Plush’s death. But by the end, it was clear that there are still numerous unknowns.

The lack of certainty, however, didn’t stop the removal of City Manager Harry Black, which Mayor John Cranley has been seeking for more than a month. On April 19, Cincinnati City Councilman Greg Landsman announced he would vote in support of dismissing Black, citing the call center as the reason.

Black resigned shortly before a vote to fire him April 21.

Previously, Landsman had been one of five holdouts in an ongoing stalemate between Black and Cranley, who asked the city manager to resign March 9. When Black refused, council was required to approve his ouster. With Landsman’s vote in favor of Black’s departure, the latter’s fate was sealed.

“The dysfunction at City Hall clearly needs to end, and we have to be fully focused on fixing the issues with our 911 system,” Landsman said in a statement. “The manager is not fully focused on this, and we continue to be distracted by the ongoing saga surrounding the manager and mayor.”

There will be multiple investigations into the situation at the call center. During the emergency council meeting on April 17, then-manager Black said the city will launch what is called a “sentinel event” review, which is often used in the medical field. CPD and Hamilton County Prosecutor Joe Deters will also launch their own investigations.

Among the questions remaining: Did the ECC’s staffing shortage play a role in Plush’s death? Were equipment shortcomings responsible? Or, as a recently dismissed Cincinnati Police assistant chief and a former ECC worker who is suing the city allege, are the problems due to a hostile work environment?

The center isn’t at its full complement of employees due to difficulty finding the right hires for the high-stress job, officials say; it’s currently down about a dozen employees. But the staffing has improved, going from 80 dispatchers in 2016 to 93 this year, and it is on pace to fill all positions by December. CPD Lt. Col. Terri Theetge told council that the center has a 70 percent retention rate and that industry standard is around 50 percent.

“I don’t believe there is anything in city government that is a barrier,” Theetge said of the shortages. “I think it’s the job itself and the stress and the reputation it has in getting the right people to apply.”

Councilman Wendell Young wondered if that’s too much. CPD Capt. Jim Gramke, the current head of the ECC, is reaching out to other call centers across the country to determine best practices for shift lengths and other staffing issues, according to Theetge.

Technical limitations may have also played a role in the Plush tragedy. Black said ECC employees and management are still adjusting to new technology introduced over the last year and a half.

“The center is at a juncture of the transformation process where we’ve implemented new technologies over the past 12 to 16 months,” Black told council. “That technology is still taking hold. It’s state of the art, competitive with industry best practices, but the team is still making adjustments.”

But that will take more people, according to some within the call center. Jennifer King, a systems analyst at the ECC, said she has repeatedly asked for more staff to help with the adjustment to the new systems, but hasn’t received it.

During the April 17 emergency meeting, Vice Mayor Christopher Smitherman read a report from the city’s vendor for the call center’s computers that said they were not down that day, contrary to a dispatcher’s claims. Questions about the precision with which dispatchers can locate cell phone callers also revealed that the technology available isn’t always very helpful. Calls bounce around cell phone towers, according to city officials, not over the internet via an app, and the call center can’t pinpoint you the way an Uber drive can.

What about human error?

An internal investigation found that the first call made by Plush was mostly standard, though CPD officers Brian Brazile and Edsel Osborn were dispatched in four minutes instead of the usual two minutes. Body camera footage shows neither exited their cruiser. The officers cleared that call, meaning they had completed their search for Plush, 11 minutes after dispatch. Recordings from the officers’ run indicate they thought the call may have been a prank.

“I think somebody’s playing pranks,” one of the two officers said over police radio later. “It was something about they were locked in a vehicle across from the school, we never found anything. But we’ll respond and see what else we can find.”

The second call was rockier. Dispatcher Amber Smith says she couldn’t hear Plush very well, or at all at times, during that call, though he is audible in recordings. In the recording, Plush tells Smith he is in a gold Honda Odyssey, information Smith says she didn’t hear and which she did not pass on to officers. Smith was on administrative leave following Plush’s death but has since returned in a non-dispatch role.

The council meeting presided over by Cranley ally Smitherman also heard testimony from a trio of former call center officials at the center of controversies around City Manager Black.

Cranley wanted Black out of his role as city manager due in part to a convoluted series of events involving former CPD Assistant Chief Dave Bailey (who was fired earlier this year); Elizabeth Christenson, a former staffer who did mapping for the ECC; and CPD Capt. Jeff Butler, who sued the city and Black over a promotion he didn’t get last year and who is named in another gender discrimination lawsuit against the city. Christenson quit her job at the ECC and filed a lawsuit against the city alleging mismanagement last year. The three say that internal tension and mismanagement within the call center have made it dysfunctional.

“I started getting AFSCME and CODE (public union) employees coming into my office asking for my help,” Bailey says, pointing to “climate issues” the he alleges hobbled the ECC.

Bailey says an earlier arrangement in which the city’s police and fire departments split management of the ECC seemed to work well and recommended returning to that arrangement.

The testimony from Black’s foes during the emergency meeting was tense, but not as contentious as what came later. Plush’s family stormed out of the meeting near its end after comments from Cincinnati City Councilman Young, who suggested that Plush’s death was the result of a perfect storm of bad situations.

“You know what, stop this right here,” Plush’s uncle yelled after Young said that no amount of money would make the family feel better and that it may be no one is to blame. “This is the most insensitive thing I’ve ever heard. You guys were doing wonderful until this guy started talking… You have crossed the line.”

The family then walked out, leaving council stunned. Young has since apologized.

Meanwhile, investigations into the failures that may have led to Plush’s death will continue. CPD Chief Eliot Isaac said he expects the department’s probe to be done in roughly 10 days. Other inquiries could take longer, however.