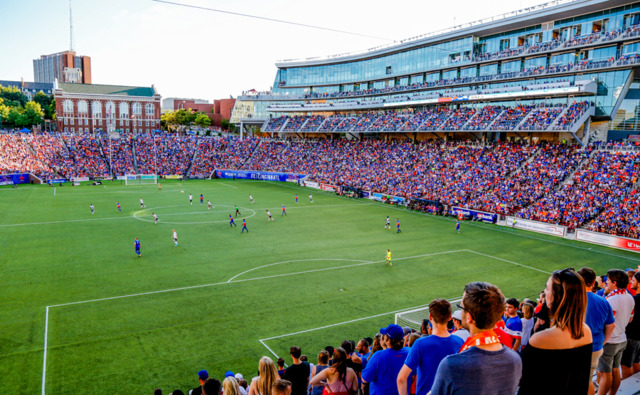 Is a stadium for a Major League Soccer franchise team worth $36.8 million in city funds? Cincinnati Mayor John Cranley thinks so.

At a news conference at City Hall today, Cranley outlined his proposal for funding the infrastructure needed around a potential FC Cincinnati soccer stadium in Oakley, highlighting what he says will be big benefits for the neighborhood and the city as a whole. The offer comes as the team considers a possible move to Newport, where it has been looking at a riverfront site near Newport on the Levee.

"I'm willing to promise that thousands of jobs will follow this public infrastructure when completed," Cranley said at the news conference. "FCC is part of our city's renaissance, and it's an amazing opportunity to expand this big-league city from two major professional franchises to three — the Reds, the Bengals and FCC."

So how would Cranley pay for the necessary upgrades to roads and other infrastructure around the stadium? Let us count the ways.

"That will be a risk that FCC will have to take," Cranley said of possible shortfalls. "The city would not guarantee the $1.5 million."

Adding in a potential $15 million, 1,000-car parking garage Hamilton County Commissioners say they could throw in gets the team closer to its $75 million ask, but not quite to the finish line.

"This city routinely provides public infrastructure development for private investment," Cranley said, noting that the proposed stadium site is currently unused and basically inaccessible. "I believe we should treat FCC the same way. This investment isn't an earmark road for one entity. It is a public road, public infrastructure that will be for all of us to use, and for businesses to use who can locate near this site."

Potential infrastructure work around the site could include expanding Vandercar Way and Madison Road to five lanes near the stadium and building a five-lane loop around the stadium site.

Tax money to help FCC's $200 million stadium — which the team will finance and says it needs to have in motion to compete for a Major League Soccer expansion franchise — is controversial. Memories of Hamilton County's 1996 deal to finance Paul Brown Stadium and Great American Ballpark — generally considered to be a bad one for taxpayers — haunt conversations around future sports facilities. That deal also involved FCC General Manager Jeff Berding, who has been a major cheerleader for the stadium. An entire group calling themselves No More Stadium Taxes sprung up in opposition to FCC's ask for public money.

Cranley's proposal may face some opposition from Cincinnati City Council as well. Council needs to pass the ordinance Cranley introduced today and will probably first consider it at a Budget and Finance Committee meeting at the end of the month.

"How about we give FC Cincinnati the public dollars they want for infrastructure in exchange for partial ownership of the team, equal to our investment versus total costs?" Councilman Chris Seelbach, often a critic of Cranley, tweeted after the mayor's announcement. "That's what this new stadium is about, the ability to increase value of team exponentially as an MSL franchise."