When Someone Great Is Gone

Reflections on LCD Soundsystem's 'Shut Up and Play the Hits' 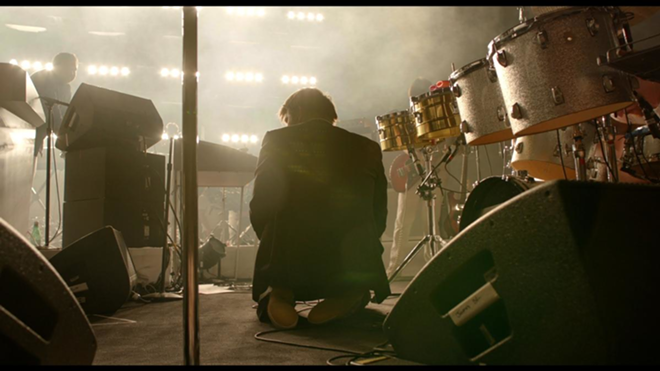 There’s a tremendous breach between a life of stardom and a life of ordinariness; it’s a point of view most of us Joes take. Constantly forming idols for ourselves, we forget that those deemed as “famous” perform such mundane tasks as even putting on underwear in the morning. For some reason, famous people don’t wear underwear — that’s too routine. They don’t have routines, they have fabulous, spontaneous lives. Perhaps they were never even children. Their birth was the moment that you fell in love with what they do. They are an entirely different kind.

Shut Up and Play the Hits bridges that gap for us, though. The documentary, directed by Dylan Southern and Will Lovelace, was screened in select theatres for only one night — a seemingly arrogant tactic, though I think it was done mostly just because it was the easiest and most affordable (the opposite of arrogant). Lucky for Cincinnati, the Contemporary Arts Center showed it in the lobby of its stone, skate park-like building to a full audience.

Shut Up and Play the Hits tells the visual tale of dance/punk band LCD Soundsystem’s final moments as one of the world’s most respected and adored musical entities. The band’s ending, oddly constructed as it was, provoked curiosity: Why stop at the pinnacle of your career? Did you have this planned all along?

Using shots of the band’s last show to a sold-out crowd at Madison Square Garden on April 2, 2011, mastermind James Murphy’s life before and after the show, and an actually informative interview, Shut Up and Play the Hits does some explaining, which was what Murphy really wanted. Not only that, but it also takes us through the inevitable emotional roller coaster Murphy and his bandmates rode on, anywhere from feeling “disturbingly normal” to breaking down in the presence of the band’s now jaded yet memorable musical equipment.

The film takes a spiral shape, starting and ending at the same spot — the cleaning up of LCD Soundsystem’s farewell show — but with two very different dispositions. At the beginning, we’re still confused as to why, but by the end, as that final heavy synth note rings out, we are understanding — content even — with Murphy’s decision to wholly join a life of normalcy.

This normal life seems to revolve around Murphy’s dog. Waking up at 10:32 the morning after the final, drunken show, Murphy lays pensively sleepy with his little dog on his belly, just staring at him. Maybe it’s the dog that keeps him from accepting the sadness of the end, or maybe he just hasn’t been able to look — really look — at his dog in quite some time. Either way, it’s an endearing moment that contrasts like a flash of lightening to the madness of their final show. The back and forth filming techniques foster those aesthetics.

In the moments of the show, the film actualizes just how much people treasure LCD Soundsystem. Slow-mo shots of the audience, focusing in on particularly passionate people, combined with the circling lights of the massive disco ball and LCD’s absorbing sounds gave life to the movie, like we were there ourselves. Murphy thanked the fans and his family with an authentic sense of farewell, leading into their final song “New York I Love You But You’re Bringing Me Down,” which was almost too fitting for the circumstances — almost.

In many moments throughout the film, Murphy’s gaze suggests a complexity of despondency and hopefulness all at once, whether he’s making coffee or glowing in front of an 18,000-person show. The end is near and never has such an ending become so suddenly swallowed up. The film symbolically leaves us with a weeping fan staring at the dispersing stage, gracefully blurring the line of the sacred and profane. Murphy only wished to leave a stain, but that final note of that final song could very well ring out forever.