Each Cincinnati TIF District, by the Numbers

Cincinnati's TIF districts have become part of the debate between Cincinnati Public Schools and the city over tax incentives the city approves for developers. Beyond the rhetoric, here's what the city says it has for each of the city's 20 TIF districts.

As the City of Cincinnati and Cincinnati Public Schools continue to search for a new agreement to replace a 20-year-old deal expiring at the end of the year around the degree to which the city can offer developers tax incentives, tax increment financing districts have become an increasingly large part of the conversation.

TIFs, as they are called, take increases in property tax revenues spurred by new development and funnel them into public improvements in designated 300-acre areas. Right now, the city has 20 such districts created between 2002 and 2005 — though part of what is fueling the debate about TIF districts is that City of Cincinnati administration has recommended the creation of 15 more. Cincinnati City Council is set to vote on those Dec. 18.

That date is important because a lapse in the city's agreement with the school district could limit its ability to create TIF districts with the same generous terms it currently does — with 100 percent of increased tax revenue going into the TIF funds for 30 years, though the city pays 27 percent back to the school district.

Critics of the TIF districts, including some education activists, say the city hasn't been transparent about how the money in each TIF fund is being spent, even going so far as to call the districts "slush funds." These critics say that even with the 27 percent reimbursement, TIFs take funds from the school district — an assertion the city refutes.

Supporters of TIF districts, meanwhile, say that they allow for major public improvements, including parks, new streetscaping projects, parking garages and other projects, and that they incentivize private development that would not happen otherwise.

The city can also offer project TIFs to developers, incentives which collect revenues on increased property values and allow developers to invest them back into the covered projects. Cincinnati has 20 project TIFs and recently approved several more pending development agreements to be approved by council.

Information on each TIF district is available in monthly financial reports from the city to Cincinnati City Council, though those can be hard to find online. Council member David Mann has introduced a motion in council that would direct city administration to post information about the districts, including each district's fund balance, expenditures, and permissible uses for the money in the funds. Mann's motion would also direct city administration to present potential expenditures of TIF funds in a given district before that district's community council and get a vote on whether the community approves the usage of the funds. Finally, Mann's motion stipulates that any project involving housing that receives TIF support from the city should include units affordable at 50 percent of the area median income or less unless the district's community council waives that requirement.

Currently, the city's 20 TIF district accounts contain roughly $29 million — about $10 million of which is available to spend due to the fact the city must keep a certain amount of money in each account to cover debt.

Meanwhile, roughly $36 million has been spent from the accounts since 2007 and another $163 million in bonds supported by the districts have been issued. That money has gone to some big, pivotal — and sometimes controversial — projects, including residential, retail and office developments, the renovation of Washington Park, a number of public parking garages and public infrastructure help for FC Cincinnati's West End stadium.

Below is a handy list of each TIF district that currently exists in the city, how much money the city says is in each one's account and what the city says money generated by the districts has been spent on in the past. This TIF district supports $2 million in bonds issued in 2015 related to the MLK/Reading Road Uptown Innovation Corridor. $900,000 generated by this TIF was also spent to fund a parking garage expansion in 2017 and another $25,000 was spent in 2011 on a study around federally-funded streetscape improvements at Reading Road and Rockdale Road. As of Dec. 9 this year, the fund contained $485,460, of which $200,000 is available to be spent. 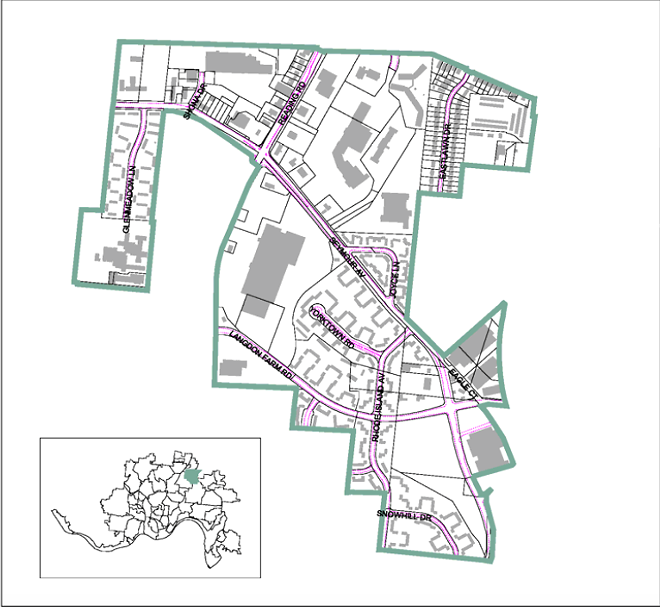 This TIF fund generated $1,023,981 used to demolish Cincinnati Gardens and prepare the site for redevelopment. As of Dec. 9 this year, this fund has $480,930 available for projects. 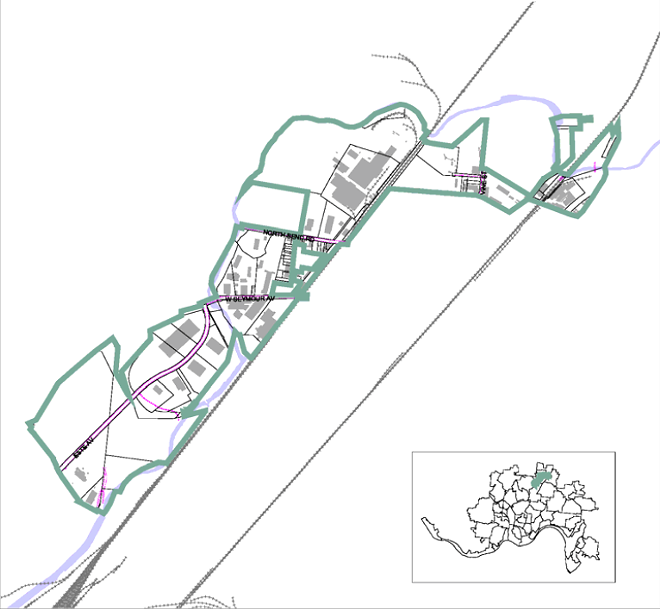 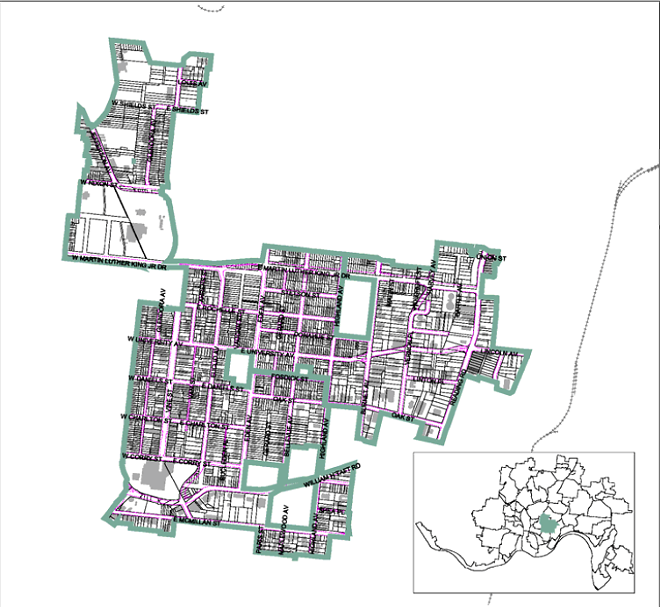 This TIF district supports roughly $22.2 million in bonds for various public parking and streetscape projects, including $6.7 million for a 219-space parking garage associated with the Hampton Inn on Vine Street and $12 million for a 440-space parking garage for offices at the former Vernon Manor. This district has also generated $600,000 spent on various streetscape improvement projects. As of Dec. 9 this year, this TIF fund contains roughly $2 million, of which $600,000 is available for projects. 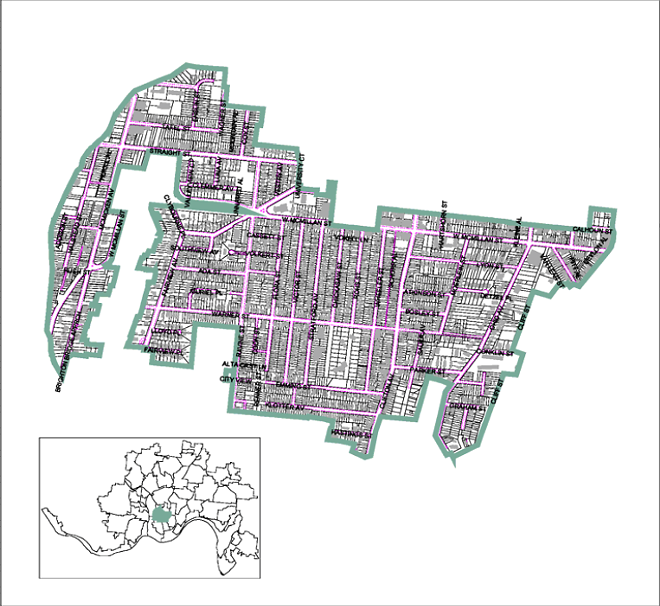 This TIF district supports $21 million in bonds for the construction of two public parking garages totaling 710 spaces associated with the U-Square development along Calhoun Street. The district has also generated $129,000 spent on streetscape improvements at West McMillan and Ohio Streets. As of Dec. 9, this district has $1.6 million in its account, all of which currently is unavailable for projects due to the city's debt coverage ratio requirements. 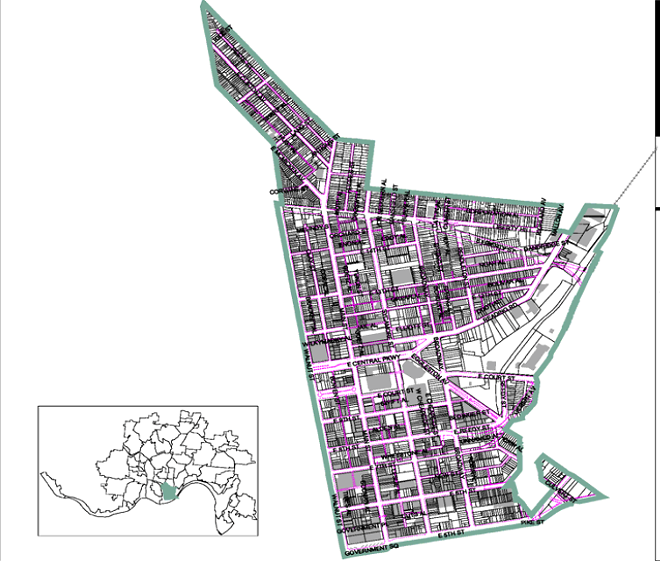 The city's three downtown TIF districts are the most active. The Downtown/OTR East district supports $60 million in bonds that have gone to major projects like the renovation of Ziegler Park ($10 million), $8 million for public infrastructure around the coming FC Cincinnati stadium in the West End, $11.5 million issued in 2011 for the renovation of Washington Park and public infrastructure around downtown's casino ($28 million) and others. Neither the stadium or Washington Park are within the geographic bounds of the district — though under the letter of the law, a project only has to benefit a district, not be located within it, for TIF funds to be used for it.

In addition, the district has generated roughly $7.1 million that has been spent on developing vacant buildings into apartments and condos on Clay and Main Streets ($2.6 million), support for the new downtown Kroger and its parking garage ($2 million) and other projects. As of Dec. 9 this year, the account had roughly $8.6 million in it, with $3.5 million of that money available for projects. 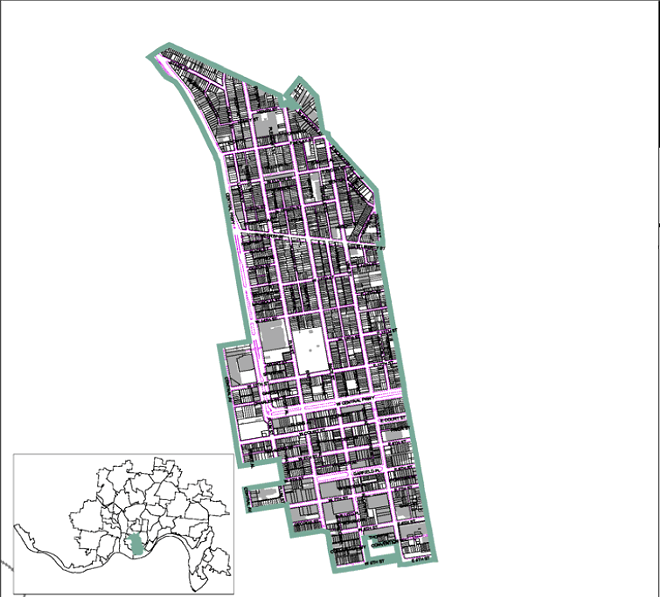 This district encompassing parts of downtown, OTR and the West End has also seen a lot of activity. The district supports more than $10 million in bonds, including $7.5 million to support the renovation of buildings into apartments and condos on Vine, Republic and Race Streets. The district has also generated roughly $10.3 million that has been spent on projects like the aforementioned apartments and condos (roughly $7 million), streetscaping along Vine and Race Streets up to Liberty Street ($1.85 million) and a number of other projects. As of Dec. 9, this fund had $5.25 million in it, of which $2 million is available to spend. 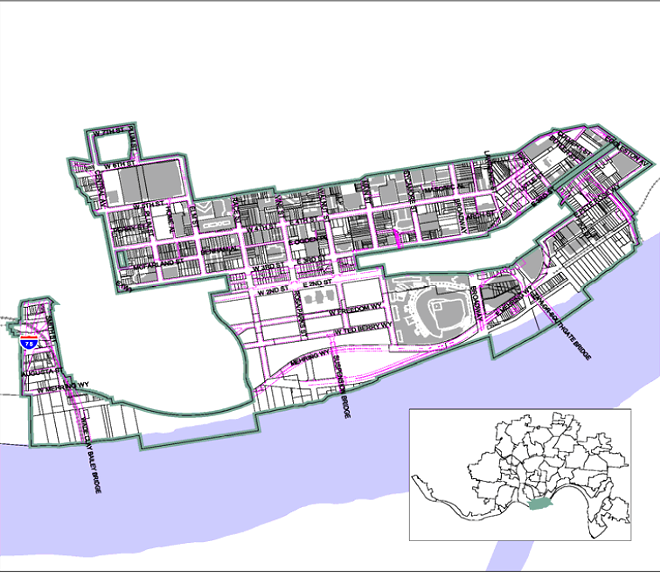 This district along Cincinnati's downtown riverfront supports $7.7 million in bonds — $5 million to fill a capital gap for Cincinnati's streetcar when the State of Ohio pulled its funding for the project in 2012 and another $2.7 million paid in 2015 for a public parking garage at The Banks. In addition, the district has generated $40,000 allocated in the city's fiscal year 2020 budget for improvements to Ogden Alley to make it compliant with the Americans with Disabilities Act. As of Dec. 9, this fund had a $2,272,779 balance, with $500,000 of that available for use. 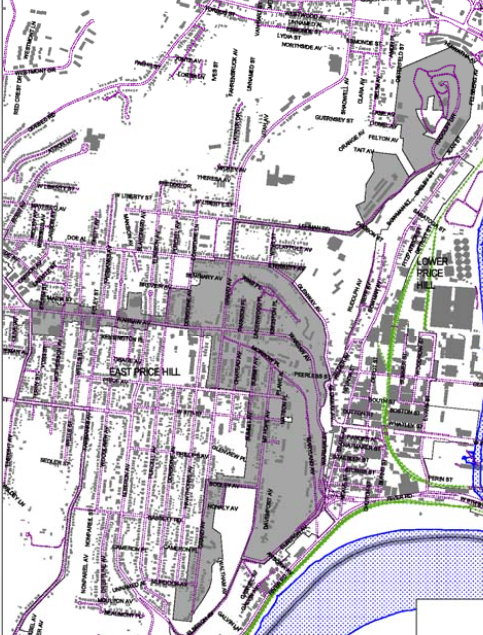 This district supports $2 million in bonds for a 130-space public parking garage next to the Warsaw Federal Incline Theater ($1.75 million) and renovation of the East Price Hill Masonic Lodge for an arts center overseen by Price Hill Will ($250,000). In addition, the district has generated another $250,000 in cash going toward the Masonic lodge's redevelopment. As of Dec. 9 this year, the fund has $272,616 in it, of which $250,000 is available for use. This district has generated roughly $6.7 million that has been spent on a number of projects including major streetscaping along Woodburn Ave. as part of residential redevelopment there ($2.5 million in the neighborhood' business district in 2007, $1.57 million in 2016 and 2018), purchase, stabilization and renovation of blighted properties in the neighborhood's business district ($1.4 million in 2013 and 2015) and other projects. As of Dec. 9 this year, this account has roughly $2.2 million in it, with $1 million available for use. 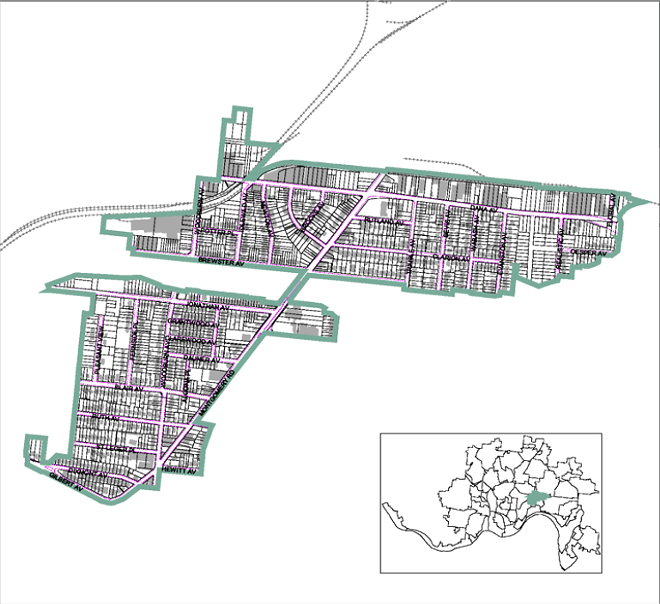 This district supports $1.5 million in bonds issued to pay for streetscape improvements along Dana Avenue ($750,000) and acquisition of property in the neighborhood's business district along Montgomery Road. In addition, the district has generated about $1 million that has been spent on those efforts along the neighborhood's business district ($700,000) and stabilizing the former home of King Records ($300,000). The district's account had $769,960 in it as of Dec. 9, with $500,000 of that money available for use. 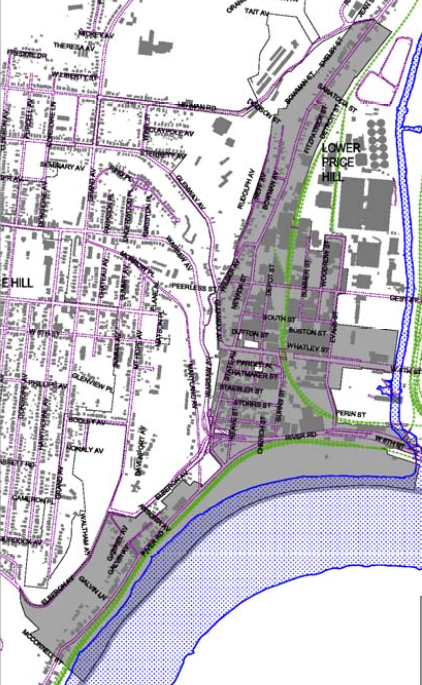 This TIF district supports $8.68 million on bonds associated with property acquisition, road construction and public infrastructure supporting development projects at Madison Circle and Madison Square, and at Madison Road and Whetsel Avenue. It also generated $4.2 million used in 2019 for public infrastructure improvements associated with the development of residential, commercial and office space on Madison and Whetsel. As of Dec. 9 this year, the fund had $1,037,256 in it, none of which is currently able to be spent due to the city's debt coverage ratio requirements. This TIF district supports $2.75 million in bonds issued between 2009 and 2010 for streetscape and transportation infrastructure improvements around Oakley Square and Geier Espelande in the Oakley Gateway area. This district also generated $1.25 million used in 2016 for demolition and construction of a 242-space parking lot associated with MadTree Brewing's new location and another $368,550 used in 2018 to repair and improve pedestrian bridges in the neighborhood's business district. As of Dec. 9 this year, this district's fund has $1.4 million in it, of which $600,000 can be spent on projects. This TIF district supports $380,610 in bonds issued in 2018 for property acquisition and development in the neighborhood. The account currently has $102,706 in it. The city used this TIF district to issue $14,690,976 in bonds in 2008 for the construction of a public parking garage to support redevelopment of the Baldwin 300 building. The city also issued $1.7 million in bonds to support redevelopment at 700-900 E. McMillan Street in 2011, including on Peebles Corner, and $5.5 million in bonds to aid in property acquisition and redevelopment of 148 apartments at Trevarren Flats and Firehouse Row. This TIF district also generated $750,000 used for property acquisition and streetscape improvements in the 700 block of E. McMillan Street. The balance of this account as of Dec. 9 this year was $1,088,841, all of which must stay in the account to support its required debt coverage ratio. 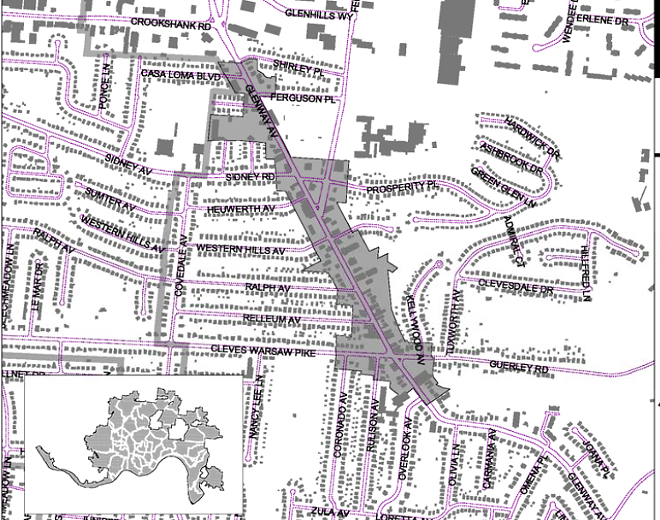 The city used this TIF district to issue $750,000 in bonds. That money was originally slated for use on streetscape improvements on Glenway Avenue in the neighborhood's business district in 2009, which city documents reflected. However, the city says that document was not up-to-date and that the money eventually went to helping Price Hill Will acquire property at 4940-4964 Glenway in 2014. Its current balance as of Dec. 9 this year was $17,451.48, though that money must stay in the account due to debt coverage requirements. 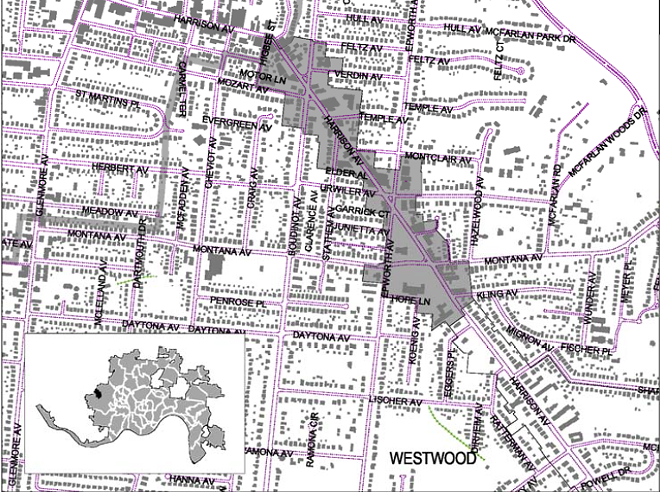 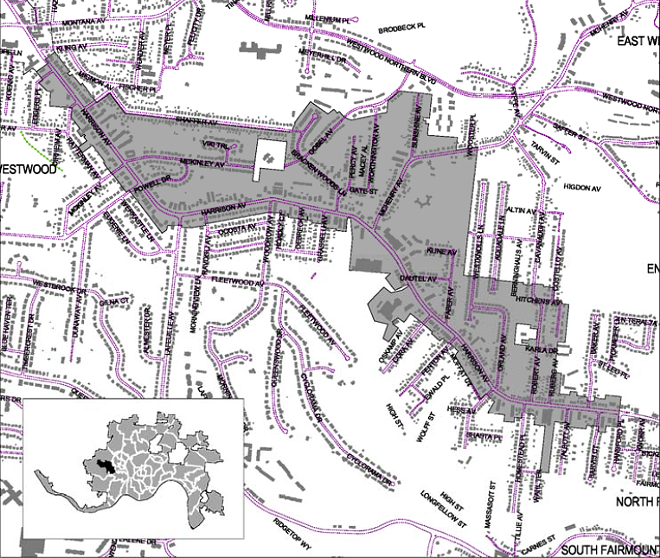 This TIF district generated $750,000 used in 2009 for property acquisition with the Westwood Community Urban Redevelopment Corporation on Bracken Woods Lane and Harrison Avenue. Its balance as of Dec. 9 was zero.