Dayton becomes first Ohio city to take stance against other states that are dumb; spawn of Donald Trump avoid having to vote for evil father; celebration of new soccer team's first win includes theft of team's banner and more. 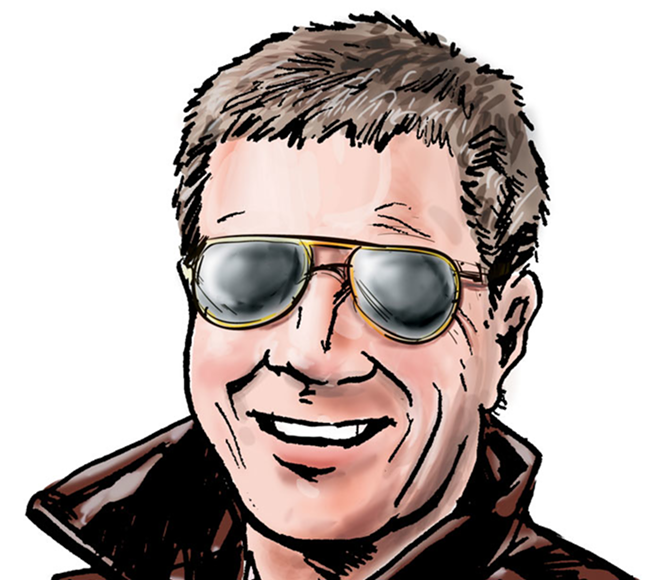 Way to go, Dayton. This week, our friends who live past IKEA and to the north became the first city in Ohio to formally take a stance against the “It’s OK to Discriminate Against LGBTQ Folks Cuz the Constitution Sez We Can Use the Bible to Promote Hatred” legislation recently passed in North Carolina and Mississippi. Dayton Mayor Nan Whaley issued a memo explaining that all non-essential travel to those two states would no longer be permitted because the laws don’t sit well with the city, which has several anti-discrimination policies in place because it is the 21st century and it’s barbaric to use governing bodies to restrict the rights of others. Other municipalities across Ohio have followed Dayton’s lead, though all have stopped short of banning non-essential travel to any places who think the Wright Brothers were so bored growing up in Dayton that it inspired them to risk life and limb to figure out a way to fly far, far away from there.

Spawn of Donald Trump Avoid Having to Vote for Evil Father

Politics makes people tired. Worrying about things like whether the media and/or Hillary Clinton’s campaign have somehow already locked up the Democratic nomination even though it seems like people who aren’t super delegates want Bernie Sanders to get it will keep you up all night, if you let it. The political news this week details how, by virtue of not getting around to registering to vote in New York before the deadline passed, Donald Trump’s children, Eric and Ivanka, will not be able to take part in the Democratic primary this year. According to The Donald, his kids “feel very, very guilty” that they’ll have to sit this one out. Erica and Ivanka released a statement explaining that stupid New York’s registration process is “one of the most onerous.” They also remarked about how even though casting blame upon a voting process that millions of others (even poor people!) managed to figure out and complete seems like a snotty thing to do, it is exactly what spoiled-brat children who grow up to be spoiled-brat adults are expected to do in situations when they appear in a lazy/unflattering manner.

Some call it soccer. Some call it football. Some call it boring. Whatever you call it, you probably weren’t as drunk as the jabronis who sullied FC Cincinnati’s first win during the club’s home opener at the University of Cincinnati’s Nippert Stadium by absconding with a huge banner large enough to cover 100 seats. After learning that Queen City residents had welcomed their new team to the city by stealing some team property, FC Cincinnati’s brain trust came up with an idea that ended up getting the logoed seat covering returned. Reasoning that whoever did it was probably just really wasted when they committed the theft and that culprits would feel remorse and fear of getting caught after waking up less drunk the next morning, club officials extended an offer through the media — if the property was returned within 24 hours, no questions would be asked and no charges would be filed. After the safe return of FC Cincinnati’s stuff, the team’s owners promised to focus on security improvements, then politely resisted the urge to put local fans on blast by explaining the difference between a regular banner and a championship banner for those who have never seen one of the latter during their lifetimes.

Computers have made it easier than ever to manipulate and take advantage of other people who have computers and are lonely, sad, incompetent or a mixture of the three. It would be one thing if it was just rogue criminals trying to ruin the lives of others, but our government hates to stay on the sidelines of any game where that is the end goal. To this point, Democratic U.S. Sen. Charles Schumer wants to sweeten the pot by introducing legislation offering a $25,000 reward for information gleaned from social media that helps stop a terror attack. Schumer wants Americans to “say something if they see something, especially on their newsfeed.” No terrorists have been caught yet this week, although many social media users look forward to earning good money for sending internet strangers to federal penitentiaries for aiding terrorists (and causing even worse outcomes for anyone who tags people in Despicable Me memes). Schumer’s legislation specifies that all the public needs to do is identify a target and entrap them because that’s what the government has been doing for years to pad its numbers and make it look like the incredible amount of resources thrown at this and related “security” efforts over the years has accomplished anything other than further enriching the military industrial complex.

Former Buckeye State governor Ted Strickland and U.S. Sen. Rob Portman have come up with a plan to appear at debates in five places across Ohio in the coming months. Although some pundits aren’t sure what can be accomplished by arguing in five separate sessions that can’t be achieved in one, both Portman and Strickland agree that sometimes when they debate, they get too excited and feel all the blood rushing to their brains, and they forget to use some of the best insults they thought up before they arrived.