Since ObamaCare didn’t get faded by the Supreme Court, Jean Schmidt plans to spend the rest of the summer riding shotgun in an ice-cream truck, waiting for a young boy or girl to drop their frozen treat onto the asphalt by accident so she can hop out, po 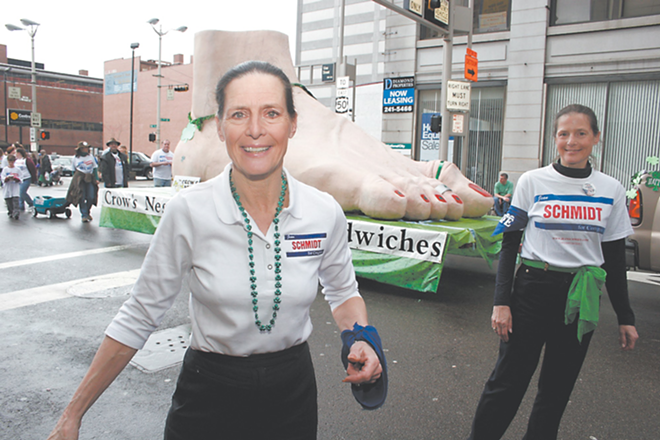 A Sparta, Ky., attorney is in a fine kettle of fish after the feds seized from various safety deposit boxes $800,000 of what they believe to be unreported income. During opening statements in federal court, the accused’s attorney attributed the stashed cash to his great-grandfather losing all his assets in the Great Depression, which allegedly caused the attorney’s client to lose trust in banks and stock markets. When court resumes, the judge is expected to inform the defendant’s attorney that his excuse for stashing the cash (and not paying taxes on it) makes as much sense as Jeffrey Dahmer blaming his cannibalism on The Potato Famine.

Chuck Norris wants to karate kick the gays square in their jaws. In an op-ed for intellectual think tank AmmoLand.com, the man we all wish would have switched fates with Bruce Lee accuses President Obama of colluding with a Boy Scouts of America board member to push a “pro-gay” agenda. Some might say that if you have to wear a neckerchief as part of your uniform then the gays have already won, but the action star maintains his steely gaze on the bigger picture. After spending most of the ’80s making movies shitty enough to make Americans root for hijacker terrorists, Norris wants to make sure all the non-heterosexuals know that he doesn’t think they should be around kids and that he only had a black sidekick in Walker, Texas Ranger because the network forced him to.

The Transportation Security Administration today fired eight federal air marshals for getting drunk during training. Lawyers for the terminated employees plan to explain how the past history of these storied law enforcers has influenced the present. Their defense is based upon the idea that marshals used to slouch and soak their moustaches with whiskey until it was time to shoot somebody in the Wild West and now they’re unfairly expected to be content spending their time listening to screaming children on transcontinental flights and browsing through SkyMiles catalogs.

If there’s one thing rich people don’t like, it’s poor people food. That’s what Jeff Ruby learned the hard way, as his Walnut Street Grill today closed its doors for the final time. Ruby is said to be focusing on his stable of other restaurants and also plans to reopen The Waterfront while making sure none of his menus ever have TV dinners and pot pies on them again.

Jean Schmidt recently celebrated like she returned a kickoff for a touchdown in the Super Bowl. Cell phone video shows Schmidt yelling “Yes, yes ... what else? They took it away” and pumping her fist under the impression that ObamaCare had been overturned by the Supreme Court. Rejoicing because you think your fellow citizens will be denied health care isn’t very nice, but doing so while exposing how ill-informed you are on the rulings of our nation’s highest court really creates a boomerang-effect ROFL. While this video is definitely funny, late-night talk show hosts are now trying to find video footage of Schmidt smiling, or at least not mean mugging like she doesn’t need bath salts to chew parts of your face off. Since ObamaCare didn’t get faded by the Supreme Court, Schmidt plans to spend the rest of the summer riding shotgun in an ice-cream truck, waiting for a young boy or girl to drop their frozen treat onto the asphalt by accident so she can hop out, point and laugh at them.

The Storm Prediction Center had the Tristate area under a “slight risk of severe weather” and severe thunderstorm watches for most of the weekend. After carefully analyzing the storm systems moving through the region, experts believe that the skies should clear early today. This is excellent for local Facebook users, who will soon be able to resume complaining about how hot it is as if this was the first July that humans were ever on this goddamned planet.