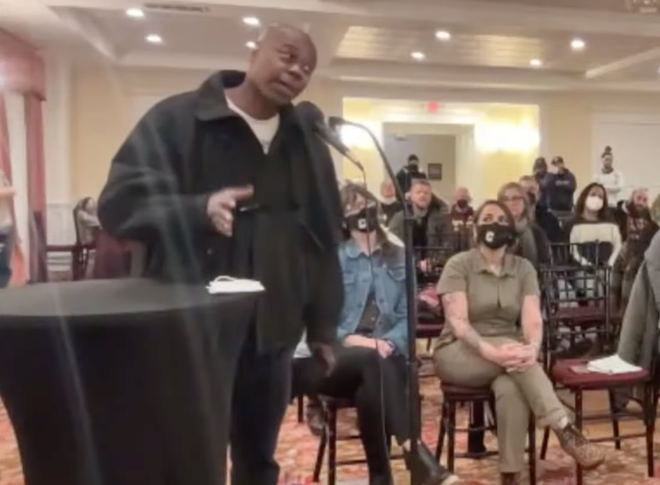 Well, you can't say comedian Dave Chappelle isn't using his clout in Ohio — just maybe not in the way some had hoped.

Chappelle attended this week's Yellow Springs Council meeting to push back against a rezoning request that would permit a multi-use development to add affordable housing units. The council voted against the development plan later that night.

Oberer Land Developers had been working with the village of Yellow Springs on a 53-acre housing development plan for U.S. 68 and Hyde Road near the south side of the small town, located about 70 miles northeast of downtown Cincinnati. The development's most recently proposed iteration included townhouses, duplexes, single-family homes, a park and several ponds. The plan also called for an affordable-housing land component that the village could continue to develop.

This plan differed from previous iterations that only featured single-family units with no affordable housing, and the site needed new zoning classification to allow for multi-family housing units. During the Feb. 7 village meeting, the council was voting on whether to approve Oberer's rezoning request and, subsequently, the expanded development plan.

Along with other village residents, Chappelle shared his thoughts with the council during the three-hour Feb. 7 meeting, voicing his opposition to the zoning change and multi-family development and threatening to pull his businesses from his idyllic hometown.

"I don't know why the village council would be afraid of litigation from a $24 million-a-year company while it kicks out a $65 million-a-year company," Chappelle said, referring to his company Iron Table Holdings. "I cannot believe you would make me audition for you. You look like clowns. I am not bluffing. I will take it all off the table."

Chappelle's plans to open restaurant Firehouse Eatery and comedy club Live from YS in the village were approved by the planning commission in September. The entertainer also frequently hosts concerts and comedy events in the village, even receiving approval for his own rezoning requests.

Chappelle did not provide a reason why he opposed Oberer's latest housing proposal or the affordable-housing component. Some social media users speculated that Chappelle's opposition stems from the development's proximity to his property.


‘You look like clowns’ — Dave Chappelle helped kill a proposal for affordable housing in Yellow Springs, Ohio, threatening to pull his plans for four businesses if the city council moved forward pic.twitter.com/HjLIzwJKc3

Chappelle had other support. Prior to the meeting, Chappelle's sister Felicia, a longtime actress and business owner who also lives in Yellow Springs, sent the village council a letter opposing the latest iteration of the Oberer development. In the Feb. 3 letter that's been entered into public record, she noted her concerns about traffic safety, the developer's previous lawsuits, supply chain issues and protecting the village's abolitionist history.

But she also mentioned her brother's outsize influence.

"And we must not be stuck on avoiding, as was pointed out by a Member of Council at the last Zoom, the fact Mr. Chappelle has invested quite a bit into our town. It does seem like a personal slight to overlook how he influences the positive trajectory of a place in the world we all hold dear," Felicia Chappelle wrote.

"Mr. Chappelle is not an enemy to YS, its Villagers or our lifestyle," she added later in her letter.

Not all residents were opposed to the Oberer's development plan that featured affordable housing units, though. Several people noted that Yellow Springs currently isn't considered "affordable" for many looking to move there. Others said that while Oberer's plan wasn't perfect, it was a starting point to introduce more affordability into the village.

At the end of the three-hour meeting, the Yellow Springs council did not approve Oberer's multi-use plan with the affordable-housing component, voting 2-2 with one council member abstaining. The company may, however, develop the land under the current zoning for only single-family houses.

In September, the Miami Township Board of Zoning Appeals agreed to Chappelle's request for zoning approval to host shows at Wirrig Pavilion just outside of Yellow Springs Sept. 30-Oct. 31. Wirrig Pavilion is zoned for agricultural, not for commercial use, so special approval was needed.

In 2020, Chappelle hosted a series of socially distanced stand-up comedy and music shows at the pavilion. The celebrity-packed performances were a huge hit throughout the summer into early fall, before Chappelle canceled the remaining shows due to COVID-19. According to Zoning Inspector Richard Zopf, Chappelle was given a temporary exception to hold the public events, overriding restrictions were in effect during the pandemic.

Watch the Feb. 7 Yellow Springs meeting below or read materials related to the meeting.