FRIDAY ONSTAGE: EMMA Pretty much all you need to do to sell theater tickets these days is attach Jane Austen’s name to a show. No zombies in Emma à la the current film adaptation Pride and Prejudice and Zombies, but Cincinnati Shakespeare is on the bandwagon with another stage adaptation by Jon Jory, the longtime leader of Actors Theatre of Louisville; his renditions of Pride and Prejudice and Sense and Sensibility have been bestsellers for the classic theater company. This production is all about girls — directed by 12-year ensemble member Kelly Mengelkoch and featuring second-year ensemble member Courtney Lucien as Emma Wodehouse, the amateur matchmaker whose efforts don’t unfold quite as planned. Through March 26. $14-$36. Cincinnati Shakespeare Company, 719 Race St., Downtown, 513-381-2273, cincyshakes.com.

'King Me'
Photo: Nina M Dot
ART: KING ME AT THE GLOBE GALLERY
Nina Wells, who goes by the artistic name Nina M Dot, opens her photographic exhibition at the Globe Gallery on Friday evening featuring lenticular portraits of local men of color contrasted with images of themselves dressed as kings. Wells aims to restore the perception of these men’s self-value by applying a what-you-see-is-what-you-become mindset. “It is a platform for men of color to better understand their value in this world,” she says in a press release. A recipient of People’s Liberty’s $15,000 Globe grant, the artist’s message of black male empowerment will be accessible to small group audiences on opening night in 20-minute increments to allow for a more intimate viewing experience. Opening reception 6-10 p.m. Friday. On view through May 7. Free. 1805 Elm St., Over-the-Rhine, peoplesliberty.org, reserve viewing space at tinyurl.com/jc85f4m.
click to enlarge

Over the Rhine
EVENT: 30 ROCKS! AT ENSEMBLE THEATRE
Over-the-Rhine theatrical and community mainstay, Ensemble Theatre Cincinnati, turns 30 this year, and to celebrate they’re hosting a birthday bash to remember. 30 Rocks! will feature theater, live music, cocktails and tasty bites from a ton of local eateries like The Delish Dish, Funky’s Catering, Gomez Salsa, Macaron Bar and more. The party kicks off with dinner by the bite, followed by a performance from the cast of The Marvelous Wonderettes and a live concert from local and nationally acclaimed duo Over the Rhine. Fun cocktail attire suggested. 7-10 p.m. Friday. $125; $175 host/hostess (includes two drink tickets). Music Hall Ballroom, 1241 Elm St., Over-the-Rhine, ensemblecincinnati.org.

EVENT: QUEERCON
If you search “social justice warrior” or “SJW” online, chances are you’ll see a lot of hate surrounding the term. It’s used pejoratively, a label for those who supposedly promote their socially progressive ideologies in aggressive and gratuitous ways. But that’s not what Kyle Shupe has in mind when it comes to the theme of the inaugural QueerCon 2016 — taking place this Friday at the University of Cincinnati’s Tangeman University Center — which is just that: Social Justice Warriors. Shupe is the co-chair for the conference along with Jo Teut, who came up with the theme. They’re both Women’s, Gender and Sexuality Studies (WGSS) second-year graduate students at UC who want to reclaim SJW and present it in a positive light. Read more about the event here. QueerCon takes place 9 a.m.-5:30 p.m. Friday at UC’s Tangeman University Center. Search “QueerCon 2016” on Facebook for more information.
click to enlarge

The Revolutionists
Provided
ONSTAGE: THE REVOLUTIONISTS
A world premiere at the Cincinnati Playhouse in the Park (simultaneously with another, Native Gardens). In The Revolutionists, up-and-coming playwright Lauren Gunderson assembles a crowd of badass historical women, including Marie Antoinette and assassin Charlotte Corday, imprisoned during the French Revolution. She imagines how they might encourage, inspire and support one another during the horrific “Reign of Terror” as they await the guillotine. Their short-term future certainly distills their conversations about what’s important, but Gunderson leavens her irreverent fantasia with a lot of sassy humor. “The beating heart of the play,” she says, “is that stories matter, that art matters.” Through March 6. $30-$85. Cincinnati Playhouse in the Park, 962 Mount Adams Circle, Mount Adams, 513-421-3888, cincyplay.com.
click to enlarge

Rayland Baxter
Photo: ATO Records
MUSIC: RAYLAND BAXTER
DNA is no guarantee of talent — sometimes it skips a generation; sometimes the progeny of the musically gifted rebel against any expectations heaped upon them. But when the children of greatness embrace their roots and use them as a starting point to chart their own unique path, the results can be breathtaking. That could easily describe the situation of Rayland Baxter, whose father, multi-instrumentalist Bucky Baxter, has sessioned and toured with Bob Dylan, Steve Forbert, Ryan Adams, R.E.M., Steve Earle, Joe Henry and many others. Like many musical offspring, Baxter came to his creative epiphany after a long and conscious avoidance of what could be perceived as his legacy. As a child, he was exposed to his father’s work and his mother’s church singing, and a good deal of popular music. Read more about Baxter in this week's Sound Advice. Rayland Baxter plays Friday at Madison Live. More info/tickets: madisontheateronline.com.
COMEDY: BENGT WASHBURN
Since his last visit to Cincinnati, Bengt Washburn has discovered a few things about himself. “I’ll just keep talking with more confidence,” he says. “That’s also what you do when you get older. You don’t get wiser, you get cocky and stupid.” Last year, Washburn did a string of military shows in Europe, including Kosovo, a place he found fascinating. “They’re pretty happy that we are there,” he says. “They have a high school called Bill Clinton High School in Kosovo. There’s a big banner with his face on it. That whole country is pretty happy with him.” Showtimes Thursday-Sunday. $8-$14. Go Bananas, 8410 Market Place Lane, Montgomery, gobananascomedy.com.
SATURDAY
click to enlarge

Photo: Shen Yun Performing Arts
ONSTAGE: SHEN YUN
China was once known as “The Middle Kingdom” and “The Land of the Divine,” said to be inhabited by heroes, sages, dragons, phoenixes and immortals. It was an era characterized by magic and splendor — an age that will be resurrected this weekend on the Aronoff stage. Shen Yun, the world’s premier classical Chinese dance and music company, channels this lost civilization through intoxicating movement and melodies; in fact, the group’s name literally translates to “the beauty of divine beings dancing.” It’s a striking visual and spiritual performance in town for one day only. 2 and 7:30 p.m. Saturday. $63.25-$123.25. Aronoff Center, 650 Walnut St., Downtown, 513-621-ARTS, cincinnatiarts.org.
click to enlarge 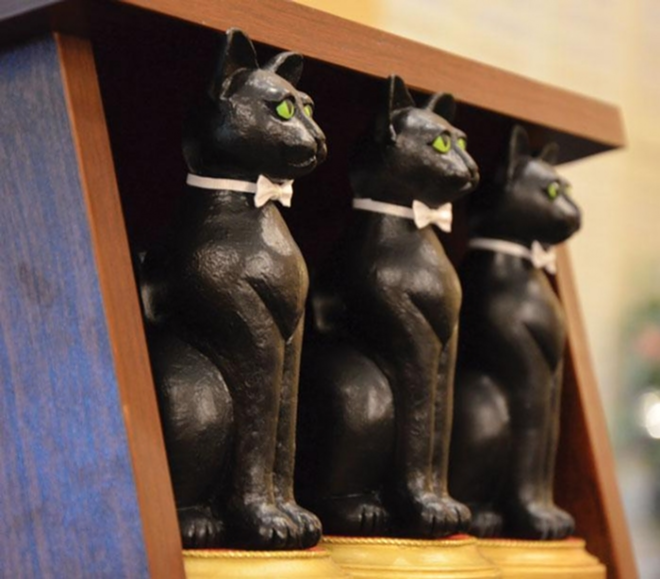 Cincinnati Home and Garden Show
Photo: Hart Productions
EVENT: CINCINNATI HOME & GARDEN SHOW
Those looking to remodel or build their own home (or simply pretend they’re at home in model kitchens and bathrooms) can head to the Duke Energy Convention Center this weekend for the Cincinnati Home and Garden show, which has helped Cincinnatians with their home, garden and building needs since 1969. The event features landscape and interior designers, remodeling specialists, retail stores, contractors and exhibits featuring the latest trends in home and garden. Through March 6. $13 adults; free for children 12 and younger. Duke Energy Convention Center, 525 Elm St., Downtown, cincinnatihomeandgardenshow.com.
EVENT: MACY'S ARTS SAMPLER
Dive into the vibrant world of local art and culture with the Macy’s Arts Sampler, a weekend festival featuring free performances and activities. Now in its 30th year, the annual ArtsWave-sponsored fest features a wide range of activities in art, music and more. Try a creative writing workshop at the downtown public library, a craft workshop at Taft Museum of Art or art-making classes for the whole family at the Art Academy. Stop by a Madcap Puppet performance at the Cincinnati Art Museum or catch a performance by the Queen City Chamber Orchestra and others at the MYCincinnati firehouse on Saturday. Sunday, say goodbye to Music Hall before it close for renovations with an open house featuring dance, craft and drama workshops, plus a collaborative concert by the Cincinnati Symphony Orchestra, Cincinnati Opera, May Festival Chorus and the Cincinnati Ballet. Saturday and Sunday. Free. Various locations. Full schedule at theartswave.org.
EVENT: SYRIAN SHRINE CIRCUS
The Syrian Shrine Circus returns this weekend for its 95th-annual family-friendly extravaganza. This three-ring circus will dazzle with death-defying aerial acts, animal attractions and the notoriously funny Shriner Circus clowns. Kids will also have the chance to ride and pet many different animals, including elephants, donkeys and camels, during intermission and after the performance. The circus benefits Shriners Hospital for Children, a network of 22 hospitals committed to pediatric care. 7 p.m. Friday; 1 and 7 p.m. Saturday; 1 p.m. Sunday. $10-$30; $5 parking. BB&T Arena, 500 Nunn Drive, Highland Heights, Ky., 513-751-4717, syrianshrine.org.
SUNDAY
EVENT: HOMETOWN HOLLYWOOD GALA
People Working Cooperatively’s final Oscar celebration/fundraiser, the Hometown Hollywood gala, is themed “Back to Black and White,” and guests will be transported to old-world Hollywood. Formal black and white dress is a must for the red-carpet welcome. There will be themed entertainment, a three-course meal, silent and live auctions and a live telecast of the Oscars. Experience a night of Hollywood glamour for a good cause. Proceeds benefit PWC’s Modifications for Mobility Program, which provides home renovations and repairs to make sure elderly, low-income people with disabilities can continue to live safely in their homes. 5:30 p.m.-midnight Sunday. $150. Hilton Cincinnati Netherland Plaza, 35 W. Fifth St., pwchomerepairs.org.
click to enlarge 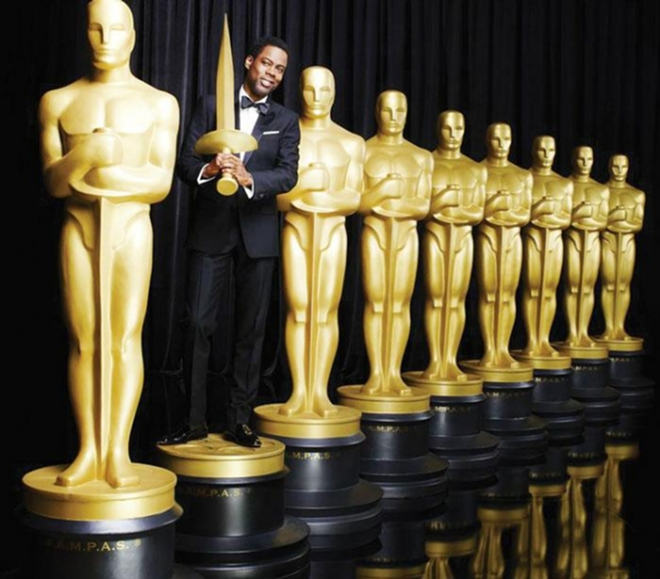 Chris Rock hosts the Oscars Sunday.
Photo: ABC/Andrew Eccles
FILM: THE OSCARS AT THE ESQUIRE
Watch The Oscars in a theater setting at the Esquire as winners are announced live with host Michael Baldwin from FOX 19. Will Cate Blanchett win Best Actress in a Leading Role for the locally filmed Carol (also nominated for cinematography and costume design)? Will Leonardo DiCaprio finally take home a Best Actor Oscar? Along with the screening, the evening also includes food by La Poste (now Harvest) and the BonBonerie, trivia and prizes. Seating is limited. 7 p.m. Sunday. $12. The Esquire, 320 Ludlow Ave., Clifton, esquiretheatre.com.
click to enlarge

Christian Sands
Photo: Provided
MUSIC: CHRISTIAN SANDS
This season of the Xavier University Jazz Series has featured some truly remarkable and accomplished artists — like Chris Potter and Brian Newman — with even more great music on the horizon (Grammy favorite and Cincinnati native Fred Hersch plays April 3). This week, the series welcomes Christian Sands, a young piano virtuoso who has previously played Cincinnati with the Christian McBride Trio. For his first local solo visit, Sands — who is known for his mastery of a wide range of Jazz stylings — will perform “Southern Song,” which he wrote for Black History Month and which features a recording of a reading by the late poet Margaret Walker. 3 p.m. Sunday. $3-$28. Gallagher Student Center Theater, 3800 Victory Parkway, Evanston, xavier.edu/musicseries.
ART: DAUBIGNY, MONET, VAN GOGH: IMPRESSIONS OF LANDSCAPE
The Taft Museum of Art’s chief curator, Lynne Ambrosini, has spent 14 years organizing the Daubigny, Monet, Van Gogh: Impressions of Landscape show that opens Saturday and believes it will be one of the museum’s most important presentations. Inspired by the fact that the Taft owns three Charles-François Daubigny oil paintings, Ambrosini’s exhibition aims to prove that this 19th-century French landscape painter served as a major, unheralded harbinger of Impressionism. The exhibition, for which you must buy a timed ticket, has 40 Daubigny paintings and also 15 Impressionist and Post-Impressionist ones by Claude Monet, Vincent van Gogh and Camille Pissarro. Through May 29. $15 adult; $10 child. 316 Pike St., Downtown, taftmuseum.org.
Scroll to read more News Feature articles