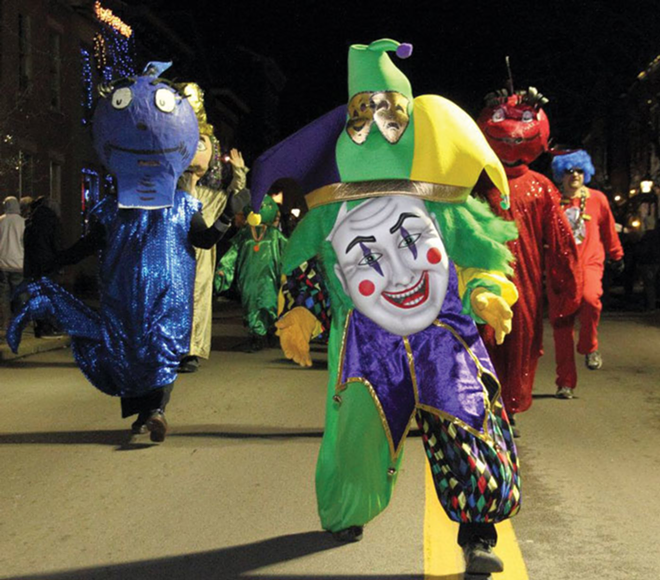 Carolyn Wonderland
Photo: Sandra Dahdah
MUSIC: CINCY WINTER BLUES FEST
This Friday and Saturday, the Cincy Blues Society’s Winter Blues Fest returns to The Phoenix (812 Race St., Downtown, thephx.com) showcasing over two-dozen Cincinnati Blues acts, as well as headliners like the Nick Moss Band and Carolyn Wonderland on four stages. Music begins at 6 p.m. Friday and 5:15 p.m. Saturday. This year’s lineup shows just how celebrated our local Blues scene is, with many acclaimed and award-winning and nominated artists slated to appear. Read more here.
ONSTAGE: IF/THEN
Cincinnati audiences loved Ensemble Theatre’s 2011 production of next to normal, Tom Kitt and Brian Yorkey’s Pulitzer Prize-winning Rock musical about a woman afflicted with paranoid schizophrenia. In fact, ETC revived it in 2012 at the end of the same season. Unlike many current Broadway hits, the show wasn’t a musical version of a movie or a collection of familiar Pop tunes. Kitt and Yorkey’s second Broadway collaboration, the musical If/Then, is another show that’s wholly their own creation. It’s currently onstage at the Aronoff Center. Read more about the play here. If/Then continues through Sunday at the Aronoff Center. More info/tickets: cincinnatiarts.org.
click to enlarge

EVENT: GARAGE BREWED MOTO SHOW Rhinegeist will be packed with 50 custom bikes from builders all over the Midwest, who range in experience from professional builders to those who build straight outta their home garage. Come view the bikes, many of which were made specifically for the show, and vote for your favorite. That’s right, there are no professional judges. Builders will compete for the guests’ attention — and votes — during the moto show. 5 p.m.-midnight. Saturday. Free. Rhinegeist, 1910 Elm St., Over-the-Rhine, garagebrewed.com. 'Remember'
Photo: via IMDb
FILM: JEWISH & ISRAELI FILM FESTIVAL OPENING NIGHT
The Mayerson JCC hosts a month-long festival of thought-provoking, controversial and inspiring films at theaters throughout Cincinnati and Northern Kentucky. Featuring the work of both established and emerging filmmakers, selections include Jewish-interest films produced in and outside of Israel. The event kicks off Saturday with a screening of Remember at The Carnegie. The thriller follows an elderly man and Auschwitz survivor (Christopher Plummer) in his search — aided by a hand-written letter and fellow survivor — for the person responsible for the death of his family. Ticket price includes a drink, dessert reception and valet parking. 8 p.m. Saturday. $36; $32 JCC members. The Carnegie, 1028 Scott Blvd., Covington, Ky., mayersonjcc.org.  http://citybeat.com/cincinnati/article-34554-festival_of_plenty.html
click to enlarge

Alex Stone
Photo: Provided
COMEDY: ALEX STONE
It has been quite a year for Sycamore Township native Alex Stone. After relocating to New York City, where he moved in with fellow Cincinnati comic Sam Evans, Stone released a CD titled Hello. Recorded at Go Bananas, the album perfectly encapsulates Stone’s storytelling style, while still containing plenty of absurdist jokes. Whether it’s talking about visiting home and staying in his old bedroom or telling the tale of how his girlfriend’s friend was hit on by actor John Stamos, Stone finds the funny. This past fall, Stone and roommate Evans started a podcast called F*** You We Like The Bengals, which each week deconstructed (or, more accurately, roasted) that week’s opponent. Thursday-Sunday. $8-$14. Go Bananas, 8410 Market Place Lane, Montgomery, gobananascomedy.com.
TV: SNL
Bernie Sanders doppelgänger Larry David hosts; The 1975 performs. Saturday Night Live 11:30 p.m., NBC.
EVENT: CHRISTIAN MOERLEIN SUPER FIRKIN SATURDAY
Moerlein hosts its first firkin cask beer festival Saturday to correspond with the big game. There will be innovative and experimental brews with one-time creations from Moerlein and other breweries from across Ohio. A dollar from each pint will be donated to the family of fallen firefighter Patrick Wolterman. 2-6 p.m. Free admission. Christian Moerlein Brewing Co., 1621 Moore St., Over-the-Rhine, christianmoerlein.com.
SUNDAY
TV: THE SUPERBOWL
The Carolina Panthers take on the Denver Broncos in basically the only thing on TV tonight. First-timers Coldplay and Super Bowl vets Beyoncé and Bruno Mars look to one-up Left Shark for the halftime entertainment. Super Bowl 50, 6:30 p.m., CBS.
click to enlarge

'The Guilty'
Photo: Ji Hyun Kwon
ART: JI HYUN KWON: THE GUILTY AT IRIS BOOKCAFE
Iris BookCafé has extended its current photography exhibition, Ji Hyun Kwon: The Guilty, through Feb. 12. Ji Hyun Kwon, a young Korean woman, began this series to “reconcile her own sense of guilt and selfishness for being an artist while the rest of the world continues in persistent suffering,” according to curator William Messer. She then went on to explore how those from other ethnic and cultural backgrounds wear their senses of guilt. She asked her subjects to express this guilt in writing and then transferred it to their faces in portraits. The show also separately provides their complete statements. Through Feb. 12. Free. 1331 Main St., Over-the-Rhine, irisbookcafe.com.
click to enlarge Krohn Spring Floral Show
Photo: Provided
ATTRACTION: HATCHING SPRING BLOOMS AT KROHN
We might have just gotten our first snows of the season, but Krohn Conservatory is launching headlong into spring with its new floral show, Hatching Spring Blooms. Spring is in the air with fragrant daffodils, hyacinths, hydrangeas and bright green grass laid out in geometric patterns. Overhead, painted pastel branches hang above a canopy of trees, decorated with hundreds of painted eggs. You can even wander a hidden forest path lined with moss and stepping stones. Through March 13. $4 adults; $2 youth. Krohn Conservatory, 1501 Eden Park Drive, Eden Park, 513-421-5707, cincinnatiparks.com.