Taste of Cincinnati. The May Festival. Memorial Day Weekend.

The May Festival
The big party this weekend is Taste of Cincinnati, but there are plenty of other options if you don't want to spend your entire weekend gorging. Check out the May Festival, Memorial Day Weekend at Spring Grove cemetery, plenty of live music, live theater and more.
FRIDAY
Celebrate the power of the voice with THE MAY FESTIVAL
The May Festival, one of the oldest and most prestigious choral festivals in the Western Hemisphere, kicks off its 2015 showcase at Music Hall with Haydn’s “The Creation” on Friday and works by Handel and Vaughn Williams on Saturday. A special May Festival Youth Chorus/May Festival Chorus performance takes place Sunday at Covington, Ky.’s Cathedral Basilica of the Assumption. Renowned guest vocalists will be joining each performance, with pre-concert festivities before Music Hall performances, including al fresco food trucks, lobby recitals, drink specials and more. The May Festival continues through May 30. $12-$125; subscriptions available. More details at mayfestival.com.
click to enlarge

Mamma Mia!
Photo: Universal Pictures
Bring a blanket for MOVIES IN THE VINEYARD
You can pop corks or corn at Vinoklet Winery’s vineyard, which is hosting three outdoor movie nights this summer. On Friday, get your Streep on when they show Mamma Mia! on the silver screen amid the sprawling acres of the award-winning vineyard. And hey, if ABBA isn’t your thing, you can catch later flicks in June and July with Under the Tuscan Sun and Phantom of the Opera, respectively. Bring a blanket or a lawn chair, but no outside coolers, drinks or food; picnic snacks, beer and wine will be for sale. 7 p.m. Friday; film starts at dusk. Free. 11069 Colerain Ave., Colerain, vinokletwines.com.

The Cavalcaders
Photo: Pat Conley
Erin go Bragh with the ACTING IRISH INTERNATIONAL THEATRE FESTIVAL
Irish theater is top of mind locally, what with the warm-hearted Outside Mullingar continuing at Ensemble Theatre and this week an international festival of Irish acting. Catch daily performances of full-length Irish plays produced by companies from the U.S., Canada and Ireland — including our own Irish American Theater Company of Cincinnati, which is hosting the 22nd annual festival at its 200-seat theater. George Heslin, founder and artistic director of New York City’s Origin Theatre Company, critiques each day’s production and presents awards for directing, acting and production during a brunch on Sunday morning at downtown’s Millennium Hotel. Through May 23. $17-$22. Irish Heritage Center of Greater Cincinnati, 3905 Eastern Ave., East End, 513-533-0100, irishcenterofcincinnati.com.

Circle Mirror Transformation
Photo: Sandy Underwood
Learn and laugh with CIRCLE MIRROR TRANSFORMATION
Annie Baker’s Circle Mirror Transformation is a deceptively simple play — on the surface, it’s a comedy about five people enrolled in a community center class about learning how to act. They work their way through six weeks of exercises intended to reduce their inhibitions and open them to being more expressive and comfortable onstage. None seem bound for onstage careers, although one says she’s worked as an actress and another, a high school student, aspires to be one. But they do learn a lot — about themselves and each other. In fact, they learn how to act on the broader stage of life in this award-winning play that’s closing the Cincinnati Playhouse in the Park’s current season. Circle Mirror Transformation, presented by the Cincinnati Playhouse in the Park, is onstage through June 7. cincyplay.com.

Steve Katz
Rock with Blood, Sweat & Tears' STEVE KATZ at the Southgate House Revival
According to Publishers Weekly, Steve Katz’s new memoir Blood, Sweat, and My Rock ’n’ Roll Years: Is Steve Katz a Rock Star? has maybe the most spectacular revelation yet of any Rock memoir. Katz was a guitarist with two successful Rock bands in the 1960s, The Blues Project and Blood, Sweat & Tears, and he went on in the 1970s to produce Lou Reed’s classic live album, Rock n Roll Animal. Katz says one of the stereo feeds of the audience track for Reed’s Animal concert at New York’s Academy of Music was lost, so there was only mono sound. That wouldn’t work, so the engineer went through his archives and found an audience track from a concert by the ultra-square John Denver. (Both were RCA recording artists at the time.) Steve Katz plays Newport's Southgate House Revival on Friday. Tickets/more info here.

Taste of Cincinnati
Photo: Provided
Gorge yourself at TASTE OF CINCINNATI
It’s no secret the food scene in the Queen City rivals that of major U.S. metropolises — a few OpenTable award winners, some James Beard Award semifinalists and even a AAA Five-Diamond restaurant call Cincinnati home. And from Saturday to Monday, your favorite Cincy foodstuffs will be in one location at the Taste of Cincinnati, the nation’s longest running culinary arts fest in the heart of downtown. Want to chase LaRosa’s with a donut grilled cheese from Tom+Chee? And then follow that up with a Thai basil/lime ice pop from streetpops? At Taste, you can, and you should. This year there will even be a Food Truck Alley on North Broadway off of Sixth. I recommend fasting until then. 11 a.m.-midnight Saturday and Sunday; 11 a.m.-9 p.m. Monday. Free. Fifth Street, between Vine and Sentinel streets, Downtown, tasteofcincinnati.com. 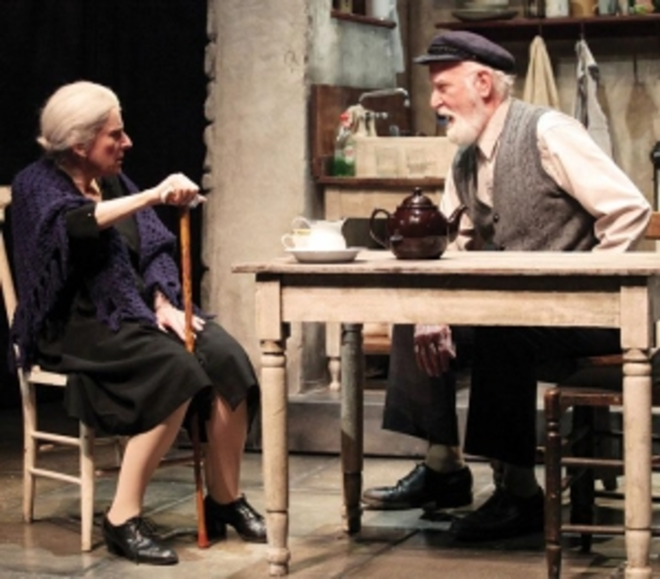 Outside Mullingar at Playhouse in the Park
Photo: Mikki Schaffner
Catch the extended OUTSIDE MULLINGAR at the Ensemble Theatre
Count on John Patrick Shanley for compelling storytelling: His Pulitzer Prize-winning drama Doubt explored the power of innuendo; his Academy Award-winning movie Moonstruck was a romantic comedy. His play Outside Mullingar lands squarely between those extremes, connecting with his family’s roots in rural Ireland for a tale of identity, heritage and love. It’s sure to be a winning production with a cast featuring Dale Hodges, Joneal and Jen Joplin (yes, they’re father and daughter) and Brian Isaac Phillips, directed by former Playhouse artistic director Ed Stern. This show is likely to be a hot ticket: It’s already been extended by a week. Through May 30. $40-$44 adult; $25 student; $18 senior/children. Ensemble Theatre Cincinnati, 1127 Vine St., Over-the-Rhine, 513-421-3555, ensemblecincinnati.org.

Ian Bagg
Photo: Provided
Laugh with IAN BAGG
Ian Bagg had dreams of playing pro hockey, but switched to comedy because he grew tired of getting knocked around the ice by players he describes as decidedly more talented than him. Fortunately, he had a knack for humor. “It’s so much fun being on a [hockey] team and hanging out,” he says. “I think that’s where I got my comedy chops: chirping at everyone from the bench and in the locker room and having a great time.” Fellow hockey fan Dave Coulier told CityBeat a very similar story a few months back. Oddly, Bagg and Coulier have never met. “You’d think if there’s anyone I would know, it’s a guy that does comedy and plays hockey,” he says. Thursday-Sunday. $10-$20. Funny Bone on the Levee, Newport, Ky., funnyboneonthelevee.com. Celebrate art all day with the ART SPACE IS YOUR SPACE artist in residence at Wave Pool gallery
Wave Pool gallery’s first artist in residence, Georgia-based artist and filmmaker Erin Colleen Johnson, organized several events Saturday that seek to investigate the intersection of race, class, migration, agriculture and environmental justice, all through the lens of soil. A groundbreaking ceremony for Camp Washington’s Urban Farm (3220 Colerain Ave.) involves setting personal intentions with a ceremonial shovel. Later at the gallery, David Singleton, executive director of the Ohio Justice and Policy Center, will talk about his work to eliminate racism within the criminal justice system, and Johnson herself will give a live performative video lecture called Providence Canyon. Groundbreaking 11 a.m.; Gallery events start at 6 p.m. Saturday. Free. 2940 Colerain Ave., Camp Washington, wavepoolgallery.org.

Unlocking the Gates of Auschwitz 70 Years Later
Photo: CHHE Collection
Remember history with UNLOCKING THE GATES OF AUSCHWITZ
The Freedom Center’s current Unlocking the Gates of Auschwitz 70 Years Later exhibit weaves together rare artifacts, photographs and the personal stories of Holocaust survivors Werner Coppel and Bella Ouziel to explore their journey and how life and the power of the human spirit continued in the face of the horrors of Auschwitz. Also on view are artifacts on loan from the United States Holocaust Memorial Museum, Hebrew Union College and more. A closing reception May 27 features a conversation with Coppel and Ouziel, as well as special recognition of area liberators and veterans to commemorate the end of World War II. Through May 27. $14 adults; $12 seniors; $10 children. The National Underground Railroad Freedom Center, 50 E. Freedom Way, The Banks, Downtown, freedomcenter.org. 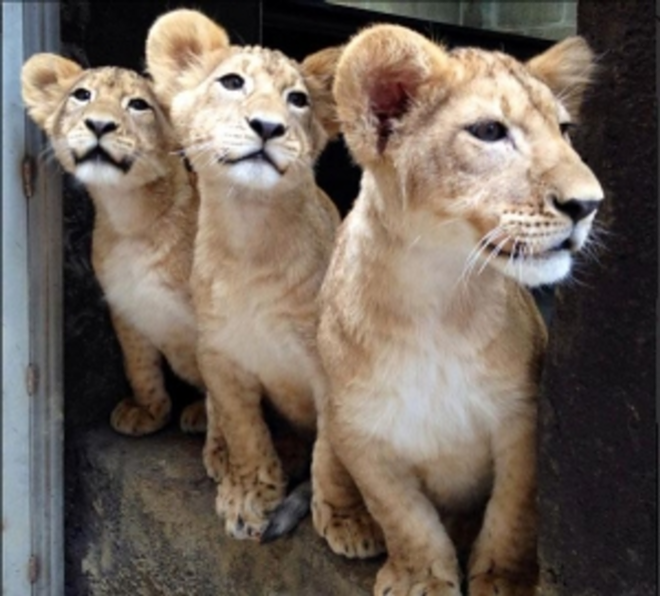 Ohhh and ahhh over ZOO BABIES
Celebrate the newest arrivals at the Cincinnati Zoo & Botanical Garden during the entire month of May, where you'll find the cutest baby faces from all over the globe. Follow the six-foot-tall pink and blue stork statues displayed throughout the zoo to lead you to baby African lions, penguin chicks, bonobo monkeys, a whole litter of African painted dogs and more, as their big eyes, miniature sizes and playful personalities melt your heart. Through May. Park admission $18 adults; $12 children and seniors. 3400 Vine St., Avondale, 513-281-4700, cincinnatizoo.org.

Memorial Day Weekend at Spring Grove
Photo: Provided
Celebrate MEMORIAL DAY AT SPRING GROVE
Between kicking off Memorial Day weekend with the Ohio Military band performing in the Rose Garden Gazebo, a veterans tribute and a historical Patriots and Pioneers walking tour of the cemetery, Spring Grove has the entire weekend jam-packed with activities. On Monday, the Sons of Union Veterans of the Civil War and the 6th Ohio Volunteer Infantry will perform an 1860s Grand Army of the Republic ritual and shower flower petals on the graves of union soldiers interred in Spring Grove, followed by a living history presentation by President Abraham Lincoln (or a man dressed like him) and a Civil War walking tour. Thursday-Monday. Free. 4521 Spring Grove Ave., Spring Grove Village, 513-681-7526, springgrove.org. Over the Rhine
Photo: Provided
Raise a barn with OVER THE RHINE
Barns and farms have played an important role in the history of Over the Rhine, married couple Linford Detweiler and Karin Bergquist’s internationally acclaimed, 25-year-old Cincinnati band. The couple met in a restored barn while in college in Canton, Ohio. For the past decade, the twosome has lived in and worked out of a brick farmhouse in Highland County on land they’ve dubbed “Nowhere Farm.” And now Detweiler and Bergquist are restoring a 140-year-old barn in Clinton County (in the village of Martinsville) and transforming it into a performing arts center with a recording studio called Nowhere Else.  As with Over the Rhine’s past two albums, Detweiler and Bergquist are turning to their loyal fanbase to help fund the new facility. The band is offering a variety of perks for donations. Among the perks (starting at the $100 level) are tickets to special preview concerts at Nowhere Else this weekend (the couple is hoping to have the facility fully ready to open by early October). The full six-piece band is performing special “Barn Raising Concerts” on Saturday (which is sold out), Sunday (7 p.m.) and Monday (3 p.m.). Over the Rhine will be debuting new songs at the concerts, which will be filmed and recorded for a forthcoming live album and DVD project. The release can be pre-ordered as part of the fundraising campaign. Visit at overtherhine.com/barnraising for full details.

Veterans and military get in free at BUTTERFLIES OF THE PHILIPPINES
As Cincinnati welcomes spring, the Krohn Conservatory welcomes the colorful and exotic butterflies of the Philippines. For 12 weeks, Krohn will transform into a majestic tribute to the Southeast Asian island country, capturing its stunning natural beauty and Filipino culture. The showroom will be a tropical paradise of free-flying butterflies soaring among waterfalls and bold volcanic murals. A rainforest under glass, the conservatory will be filled with more than 3,500 beautiful plant species, such as ornate orchids, brilliant bromeliads, delicate anthuriums and dramatic dracaenas, providing a backdrop close to home for the native butterflies to flutter. Free for active military and veterans on Memorial Day. Through June 21. $7 adult; $4 children; free ages 4 and younger. 1501 Eden Park Drive, Mount Adams, cincinnatiparks.com.