FRIDAY Binge on ORANGE IS THE NEW BLACKAfter a heavy second season that had many viewers wondering if drama would be a more appropriate genre designation than comedy (particularly for television awards), the ladies of Litchfield Penitentiary look to lighten things up in Season Three. Yes, Orange Is the New Black is back for your binging pleasure with a growing solid cast, and more laughs, tears and WTF moments that will continue to dance on the drama-comedy line. Orange is the New Black Season Three premieres Friday on Netflix. Read more here.

Discuss black photography at the CAM with a screening of THROUGH A LENS DARKLY The Cincinnati Art Museum is partnering with the Cincinnati Film Society to present a free screening of Through a Lens Darkly: Black Photographers and the Emergence of a People. Director Thomas Allen Harris and producer Deborah Willis will be present for a discussion. The film looks at how African-American communities have historically used the camera as a tool for social change, and it has a Cincinnati connection in its inclusion of photographer James Presley Ball, who worked here for 25 years before and after the Civil War. FotoFocus is a sponsor of the event. 7 p.m. Friday. Free. Cincinnati Art Museum, 953 Eden Park Drive, Mount Adams, cincinnatiartmuseum.org. Laugh and learn some calorie control with MANDY LEVY at KAZE OTR “Buy a thing of arugula from the store. Dump it in a bowl.” This is the beginning of Mandy Levy’s Buffauxlo Chicken Salad recipe from her new book Calorie Accounting: The Foolproof Diet-by-Numbers Plan for a Skinnier New You, a humorous and self-deprecating weight-loss book that feels more like your best friend telling you about her new meal plan than your typical holier-than-thou diet tome. Levy consciously nudges the concept toward something more lighthearted. “It takes itself so seriously, the dieting world,” she says. “And I just wanted everybody to lighten up.” CityBeat recently caught up with Levy via phone as she was driving from Austin to Phoenix on her current Calorie Accountingbook tour, which makes two stops in the Queen City this week. Read the interview here. Mandy Levy’s Calorie Accounting tour makes a stop 5:30 p.m. Friday at Kaze in Over-the-Rhine and 2 p.m. Sunday at Barnes & Noble West Chester. More info: calorieaccounting.com. Head to Fountain Square for MidPoint Indie Summer and BRONCHO Over the past five years, Broncho has ridden its love of ’70s Punk and ’80s Indie Rock to a press kit full of praise and the kind of fairly high-profile song placements that couldn’t help but broaden its loyal fan base. Broncho’s fortunes have continued to rise, with the first album’s “Try Me Out Sometime” being used in a commercial for HBO’s Now streaming service and “Class Historian” from the new album finding its way into an ad for Kate Hudson’s Fabletic lifestyle brand. The largely enthusiastic reviews for Just Enough Hip to Be Woman have paid dividends in the form of high-visibility bookings, including slots at Austin, Texas’ Fun Fun Fun Fest and the ever-popular Bonnaroo Festival, which the band plays the day before its stop at Fountain Square for the free MidPoint Indie Summer series. So the Broncho members may not be completely well-rested when they blow into town, but they’ll be well-primed. Read more here. Broncho performs Friday with Kopecky, Coconut Milk and Near Earth Objects. Concert begins 7 p.m.; Broncho takes the stage at 9 p.m. Fountain Square, 520 Vine Street, Downtown, myfountainsquare.com.

THE HAPPY MALADIES celebrate a record release at Woodward Theater Even a cursory listen to The Happy Maladies’ slim but impressive Chamber Folk-meets-Indie-in-Jazztown catalog reveals a certain thoughtful deliberation. But the question of sonic intent regarding the imminent new self-titled album by the Cincinnati band sparks an answer nearly as contemplative as the group’s sound. From their 2008 start, The Happy Maladies have exhibited a casual intensity, giving the sense that the quartet creates from a combination of diligence and offhandedness. While their Indie Rock approach to structured music is largely intact, the new album’s process was slightly different. Read an interview with the band here. The Happy Maladies play Woodward Theater on Friday. Tickets/more info: woodwardtheater.com. See SPOON and the Antlers at Madison Theater Spoon is the most reliable band on the planet, each album a slight variation on frontman Britt Daniel’s long-running love of terse, sharp-edged Rock & Roll. The Austin, Texas outfit’s eighth album, 2014’s They Want My Soul, is more of the same, each song a deceptively simple mix of interlocking parts: insistent beats from essential drummer Jim Eno, angular guitar riffs, driving bass lines, a sprinkling of keyboards and other subtle additives and Daniel’s vocals, which are as up-front as ever. Spoon with The Antlers perform Saturday at Madison Theater. Tickets/more info: madisontheateronline.com.

Get really excited to taste all the wine at the URBAN WINE FESTIVAL Wine isn’t for snobs. At least that’s the concept behind Over-the-Rhine’s first Urban Wine Festival, which is presented by 1215 Wine Bar & Coffee Lab and takes place in their adjacent parking lot. Whether your palate prefers red or rosé, all styles of vino will be represented via 24 selections from local distributors. In addition to a public tasting, the fest includes live music, food and a seminar featuring regional winemaking professionals. Noon-10 p.m. Saturday; tastings start at 2 p.m. $6 glass pours; $48 to taste all 24. 1215 Wine Bar & Coffee Lab, 1215 Vine St., Over-the-Rhine, 1215vine.com/urban-wine-festival.

Get sweaty at FLOGGING MOLLY and GOGOL BORDELLO If you want to work up a sweat to some high-energy music this summer concert season, your best bet is coming up this weekend as the Flogging Molly/Gogol Bordello tour steamrolls into town. Flogging Molly is known for its adrenalized twist on traditional Irish music, which is delivered with Mack truck-force, while Gogol Bordello calls its genre stew “Gypsy Punk” and pumps it out with equal aplomb and blood, sweat and tears. Adding even more red-hot spice to the concert mix is opening act Mariachi El Bronx, the popular, jet-fueled side project of Hardcore crew The Bronx, which uses (as the name suggests) Mariachi music as a jumping off point. 7 p.m. Saturday. $36-$48.50. PNC Pavilion, 6295 Kellogg Ave., California, riverbend.org.

Relish in the history of America's pastime with a VINTAGE BASEBALL TOURNAMENT at Heritage Village Take a time machine into America’s favorite pastime with the Vintage Base Ball Tournament, in which players face off in the diamond as if it were 1869, the year baseball’s first professional team — the Cincinnati Reds — formed. Whether you’re rooting for the Cincinnati Red Stockings or the Cincinnati Buckeyes, you can watch the ballists hit the horsehide in historically accurate uniforms as they follow older customs and speak in vintage discourse — strikers, hurlers, judges, scouts and all. Spectators are encouraged to dress up. Starts 10 a.m. Saturday. Free. Heritage Village Museum, 11450 Lebanon Road, heritagevillagecincinnati.org. 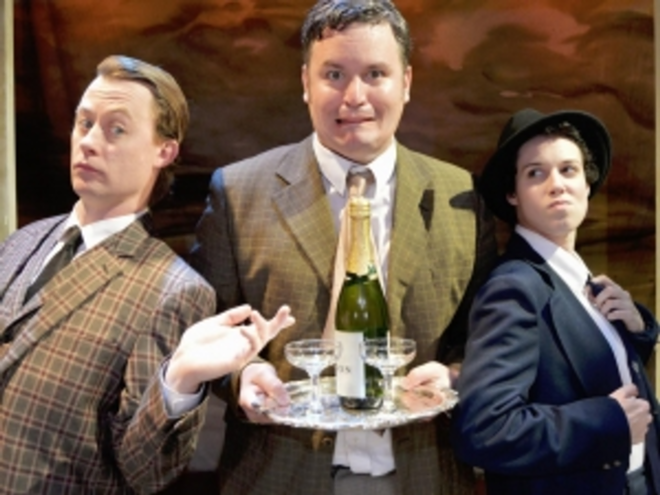 Laugh your ass off at Cincy Shakes' ONE MAN, TWO GUVNORS Ready to laugh your ass off? Cincinnati Shakespeare Company has everyone doing just that with this contemporary version of Carlo Goldoni’s 1743 comic masterpiece, The Servant of Two Masters. Richard Bean’s update is a riot of mistaken identities, love triangles and live music. The story of an ambitious guy who over-promises and gets stuck between rival bosses was a 2011 hit in London and a Tony Award winner in New York. James Corden played the fast-talking schemer in both towns — before he was named host of The Late Late Show on CBS. This will be perfectly silly summer fare. Through July 5. $14-$36. 719 Race St., Downtown, 513-381-2273, cincyshakes.com. Celebrate summer with a bowlful of tasty crustaceans at Washington Park's CLAMBAKE IN THE PARK Get your grub on, Louisiana style. This beach-themed party in the park will not only be serving up steamy bowlfuls of seafood goodness from Washington Platform but also features games and live music from Cajun rockers Robin Lacy & DeZydeco. For only $12, you can dig into a dish full of clams, shrimp, mussels and potatoes, along with corn on the cob and a dinner roll on the side. Other options are available, like steamed Maine lobster and chicken with waffle fries. Laissez les bon temps rouler! Noon-6 p.m. Free. Washington Park, 1230 Elm St., Over-the-Rhine, washingtonpark.org. Head to Horseshoe Casino for HOZIER with DAWES Every now and then a musician with immense talent reaches the upper echelon of the Billboard charts. They don’t get there because they’re so hot or because they’re dating Diplo. They didn’t win a talent competition. They’re just truly gifted, have worked hard and made it. That is the story of Hozier. The Irish singer/songwriter came out of nowhere last year when his song, “Take Me To Church,” bombarded airwaves and started collecting awards. And, yes, by now we’re all pretty sick of it. But it’s hard to deny there’s talent there. You can hear it in the lyricism and imagery, the simple piano, that backing choir and, holy fuck, that voice. Yes, you’re tired of “Amen.” But bite your tongue. Hozier is changing the Pop world, and he’s bringing that sound to Cincinnati. Show up, clap and bask in the sound of the Delta. Hozier with Dawes plays Sunday at The Shoe at the Horseshoe Casino. Tickets/more info: caesars.com/horseshoe-cincinnati. Remember Leelah Alcorn with a COSPLAY FOR LEELAH ALCORN The Diverse City Youth Chorus, Cincinnati Pride and the Cincinnati Comic Expo are bringing a one-day-only cosplay celebration (where you dress up as your favorite anime, video game, cartoon, comic book, etc. character) to Over-the-Rhine. Leelah Alcorn created her own avatar, Lazer Princess, and this safe setting will let everyone express their authentic selves. The day includes cosplay skits, karaoke, a costume contest and parade down Main Street, plus a handful of vendors. Noon-5 p.m. Sunday. $8; $10 day-of. Woodward Theater, 1404 Main St., Over-the-Rhine, facebook.com/diversecityyouthchorus.

Close out the weekend with stand-up from JOHNNY BEEHNER “I’ve been told that after two or three years of marriage, a lot of couples decide to have babies,” comedian Johnny Beehner told an audience on The Late Show with David Letterman. “My wife and I discussed this and we decided we are not ready for a baby, not even close. Incidentally, we do have a baby. We’re not ready for it, but we do have one. It’s one of those little girl ones.” In addition to appearing on the now-retired Letterman’s program, Beehner is a frequent guest on the Bob & Tom radio program. Thursday-Sunday. $8-$14. Go Bananas, 8410 Market Place Lane, Montgomery, gobananascomedy.com.