Lumenocity
FRIDAY
EVENT: LUMENOCITY
Lumenocity, the light and music architectural mapping spectacle projected onto Music Hall, is back for a third round, promising to be the perfect crescendo to your summer. Live Classical music, opera and ballet from the Cincinnati Pops, Cincinnati Symphony Orchestra, May Festival Chorus and Cincinnati Ballet Second Company coalesce in this radiant extravaganza — which, after seeing 35,000 people arrive in 2013, is now charging a fee. Tickets were distributed through a random ticket purchase lottery and are now sold out, but the good news is you can still catch parts of the show from Lumenocity Village in Washington Park, a free alternative that brings together local bands, food and crafts — not to mention Rhinegeist’s Glow Lumenocity Pale Ale — for an open-air fest with a bit of a view. This year’s illustrated projections will be choreographed to live musical pieces that range from repertoire classics to Bruce Springsteen and the main theme from Back to the Future. Gates/Village open at 4 p.m. Wednesday-Friday and 3 p.m. Saturday and Sunday. Performances begin at 8:30 p.m. (live projection mapping starts around 9:40 p.m.). Wednesday night’s performance is a dress rehearsal. Washington Park, 1230 Elm St., Over-the-Rhine, lumenocity2015.com. Glier's Goettafest
Photo: goettafest.com
EVENT: GLIER'S GOETTAFEST
Goetta is the only food that might be more Cincinnati than Skyline, and this weekend Glier’s is holding a festival to celebrate the Queen City’s favorite breakfast food. In addition to live music, games and a goetta-eating contest, you can sample the crispy-creamy treat in more than 40 different forms, including nachos, gyros, jambalaya and brownies. They’ll even have a goetta vending machine. Go forth and goetta. 5-11 p.m. Thursday-Friday; noon-11 p.m. Saturday; noon-9 p.m. Sunday. Free. Festival Park, Riverboat Row, Newport, Ky., goettafest.com.
click to enlarge World's Longest Yard Sale
Photo: provided
EVENT: WORLD'S LONGEST YARD SALE
Running from Michigan to Alabama, the 127 Sale — aka “the World’s Longest Yard Sale” — has stops at every major and not-so-major city along the way. So named because it spans Highway 127, the yard sale is as much about socializing and community as it is about selling and buying. Some people drive the entire route over three days, but don’t worry if you don’t want to leave Cincinnati: The 127 Sale has locations across the area, including in Covington’s MainStrasse Village and on Northside’s Hamilton Avenue. Through Sunday. Free. 127sale.com.

Delhi Skirt Game
Photo: Kaitlynn Conroy
SPORTS: DELHI SKIRT GAME
Get some dirt in your skirts at the 38th-annual Delhi Skirts Game. This cross-dressing softball game features hairy dudes (many of them members of the local Delhi police and fire departments) dressed as this year’s thematic mash-up: Pixar vs. Hanna-Barbera characters. Think Wilma Flintstone taking on Joy from Inside Out. Along with a ridiculous and entertaining game, there will also be food, drinks, live music and fireworks, featuring emcee Bob Herzog from Local 12. All funds from the game are used to help those in need in Delhi. 5-11 p.m. Friday. Free; donations encouraged. Delhi Township Park, 5125 Foley Road, Delhi, delhiskirtgame.org. MUSIC: FRONTIER FOLK NEBRASKA
If a band plays a concert and there’s no audience, do they make a sound? If a group plays in a sealed club with no patrons, are they simultaneously live and not live? What if a band threw a live album and nobody came? These are the hypothetical questions that plague frontman Michael Hensley of Greater Cincinnati’s Frontier Folk Nebraska as the group prepares for a two-night stand at Newport’s Southgate House Revival this Friday and Saturday night. The quartet is recording the shows for a proposed live album somewhere down the line. “I’m one of those that’s like, ‘No one’s going to fucking come,’ ” Hensley says during an interview in bassist Matt McCormick’s Covington sitting room. Frontier Folk Nebraska records its forthcoming live album Friday and Saturday at Southgate House Revival. Tickets/more info: southgatehouse.com. Slide the City
Photo: Provided
EVENT: SLIDE THE CITY
If you’ve ever been on a water slide and thought, “I wish I could do this, but on a Slip ‘N Slide and also in my neighborhood,” well, you’re in luck. Slide the City, an organization that takes its 1,000-foot water slide around the country, is coming to Cincinnati. The slide will run the length of almost three football fields down Jefferson Avenue, turning Clifton/Corryville into a veritable water-park party for two days of sun and sliding. Don’t forget your floaties — or your bathing suit. 10 a.m.-10 p.m. Saturday-Sunday. $21-$45 (registration required). Jefferson Avenue between W. Corry Street and W. University Avenue, Corryville, slidethecity.com. Smashing Pumpkins’ Billy Corgan
Photo: Scarlet Page
MUSIC: SMASHING PUMPKINS AND MARILYN MANSON
Even in the early ’90s, as Smashing Pumpkins were just becoming one of the leading acts in the “Alternative music revolution,” mastermind Billy Corgan had a contentious relationship with the press. When 1993’s Siamese Dream was coming out, the knock was that he was a control freak, something that became a primary focus of early press attacks. His candor and forthrightness is probably what made (and continues to make) him an easy target — he’s great at giving soundbite pull-quotes that can be easily amplified, something that has to be even more difficult to deal with for an honest artist in the social media age. All of this has somewhat overshadowed (especially for casual listeners or non-fans) the music Corgan has made in more recent years. Which is unfortunate, because he continues to release some strong recordings with his rotating lineup of Pumpkins. See Smashing Pumpkins with Marilyn Manson Saturday at Riverbend. More info/tickets: riverbend.org. 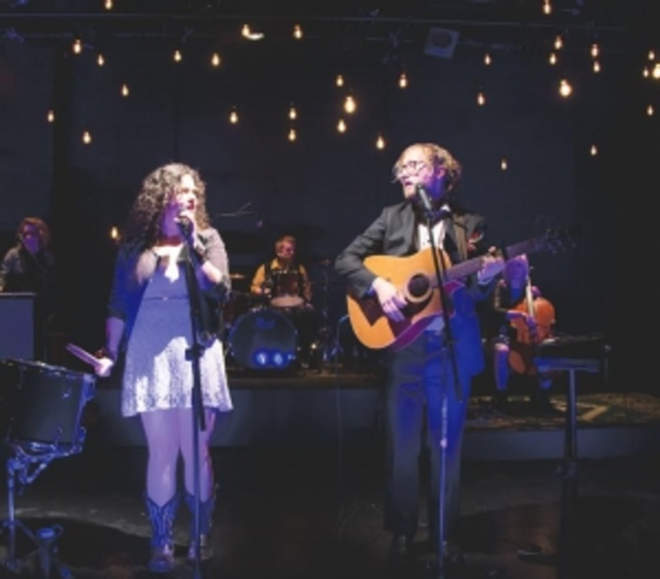 ONSTAGE: HUNDRED DAYS
Fasten your seat belt — here comes the 2015-2016 theater season. Know Theatre gets bragging rights for being first out of the local theater gate with Hundred Days, a Rock & Roll show it played a significant part in developing. The Folk Rock odyssey was created by and features the husband-and-wife duo of Shaun and Abigail Bengson. It premiered at Z Space in San Francisco in February 2014. Hundred Days is the story of Sarah and Will, who fall in love only to have their time together cut tragically short by a fatal illness. Their romantic, defiant response to their fate: Compress the 60 years they had envisioned together into the 100 days they have left. Kate E. Ryan assembled the script for this powerful piece, which is an unconventional musical, Indie Rock opera and tragic romance. Hundred Days runs at Know Theatre through Aug. 22. knowtheatre.com. Still from 'Babash'
Photo: Lisa Truttmann & Behrouz Rae
FILM: OTHER PEOPLE'S SCREENS
Other People’s Screens, a monthly experimental film screening series at Chase Public now entering into its sixth consecutive month, typically focuses on documentary-style films. For August’s program “Body Doubles,” however, organizers have taken a bit of a detour with a lineup of six genre-blurring shorts (many fresh off the festival circuit) that call into question the very tools and tropes of documentary filmmaking itself. Subjects tackled include the vocal stylings of a manic blue genie, Katie Holmes’ hands, an invented language shared with a parrot and Craigslist acting calls. Featured filmmakers include Mariah Garnett, Mary Helena Clark, Jesse McLean, Deborah Stratman and others. 8:30 p.m. Sunday. Free. 1569 Chase Ave., Suite 4, Northside, chasepublic.com. Stricker's Grove
Photo: Provided
EVENT: FAMILY DAY AT STRICKER'S GROVE
Stricker’s Grove is kind of like a mini Kings Island, only more focused on nostalgic rides and exclusive to renters during most of the year. But on Sunday, Stricker’s Grove holds a “family day” that allows everyone to visit the private amusement park. A Ferris wheel, flying Dumbo the Elephant ride, Electric Rainbow tilt-a-whirl, a retro helicopter ride, two old-fashioned roller coasters — the Tornado and the Teddy Bear — along with other classic rides for all ages (plus a miniature golf course, videogame arcade and baseball diamond) make the fun-land stand out from others in Hamilton County. The park is only open to the public four times a year, so take advantage of this festival miracle while you can. 1-9 p.m. Sunday. $12. Stricker’s Grove, 11490 Hamilton-Cleves Road, Hamilton, strickersgrove.com. 'Chief Joseph - Nez Perce'
Photo: Edward Curtis, Courtesy of the Christopher G. Cardozo Collection
ART: ENDURING SPIRIT
Edward Curtis was an early 20th-century American ethnologist and photographer who captured the disappearing world of the American Indian. In the Taft Museum’s Enduring Spirit exhibit, Curtis chronicles the living culture of Native Americans from 1900-1930 through gelatin silver photographs, cyanotypes and platinum prints, among others. Profoundly moving, the images depict everything from powerful portraits of men, women and children to Navajo riders, painted lodges and teepees, and a famous and striking image of the Nez Perce’s Chief Joseph, a crusader who led his people against the U.S. government when they were forcibly removed from their ancestral lands in the Pacific Northwest. In addition to the exhibit, check out Saturday Sounds (noon-2 p.m.) on the terrace, with live music from Full Moon Ranch. Through Sept. 20. $10 adults; $8 seniors/students; $4 youth. Taft Museum of Art, 316 Pike St., Downtown, taftmuseum.org.