FRIDAY Dig your savage soul with BARRENCE WHITFIELD & THE SAVAGES Barrence Whitfield & the Savages have had more lives than a Buddhist cat. They recorded two brilliant albums in the early ’80s, broke up in 1986 and reunited in 2010, resulting in three exceptional albums — 2011’s Savage Kings (on Cincinnati’s Shake It label), 2013’s acclaimed Dig Thy Savage Soul and their latest, Under the Savage Sky (both on Bloodshot Records). Given this consistent output, it’s natural to wonder how the quality remains so high. “We just come up with great, interesting tunes,” Whitfield says. “We try to stick to the same formula like guys of the ’50s and ’60s; sometimes it’s all about peoples’ lives and things going on in everybody’s world.” Read more in this week's Sound Advice. See Barrence Whitfield & the Savages with All-Seeing Eyes Friday at MOTR Pub. More info/tickets: motrpub.com. Country star Dierks Bentley
Photo: Nino Muñoz
Go Country with Dierks Bentley
Riser, the latest album from Dierks Bentley, is being lauded for its collection of mid-tempo tunes and ballads that finds the Country singer digging deeper emotionally than ever before — a direction inspired largely by the death of his father two years ago and the recent birth of his first son. For an artist who has been known for such energetic songs as “What Was I Thinking,” “Sideways” and “5-1-5-0,” the more restrained and contemplative material on Riser is a bit of a stylistic changeup. Read a full interview with Bentley here. Dierks Bentley plays Friday at Riverbend Music Center. Tickets/more info: riverbend.org.
click to enlarge Ohio Renaissance Festival
Photo: Will Thorpe Photography
Get thee a turkey leg at the OHIO RENAISSANCE FESTIVAL
The Ohio Renaissance Festival is back and bringing fall weekends filled with costumes, turkey legs, mulled mead, jousting, games, glass-blowing demonstrations, choirs, crafts and tarot readings inside a 30-acre, recreated 16th-century village. This weekend is opening weekend, so tickets for adults are buy-one-get-one, and kids under 12 get in free. Be sure to check the website for themed weekends (like Time Travelers Weekend Sept. 12; where’s your fez?) and different deals. Nerds of all kinds welcome — just remember that any medieval weapons you might bring need to be tied in a sheath at all times. 10:30 a.m.- 6 p.m. Saturdays and Sundays (and Labor Day). Through Oct. 25. $21.95 adult; $9.95 child; $119.95 season pass. 10542 E. State Route 73, Waynesville, renfestival.com.
Watch drunk people talk about art at DRUNK ART HISTORY
If you’re a fan of the show Drunk History and have a soft spot for art history, you might have found the Holy Grail in Live-In Gallery’s second-annual Drunk Art History night. The gallery assigns participants a subject to research while imbibing, and they plan a live presentation for fellow partygoers. Audience members eat, drink and wax profound about their assigned art movement and/or artist — oftentimes in the form of mostly made-up art historical lectures, which tend to have more humorous than educational effects, but nonetheless get participants excited and invested in art historical narration. 7 p.m. Saturday. Free. Live-In Gallery, 2159 Central Ave., Brighton, facebook.com/liveingallery.
click to enlarge Krohn Conservatory
Get really ready for fall at the KROHN CONSERVATORY
The Krohn Conservatory’s fall floral show — A Bevy of Blossoms and A Flock of Flowers — will be in bloom for two months this fall, starting Saturday. The show celebrates the best of fall flora with various displays, a full room of chrysanthemums, discussions and activities. Browse table displays of autumn plants and learn about the history of harvest, or create your own fall décor from real flowers and leaves. Enjoy themed days like a Fall Harvest Celebration, Fungus Fest and a Very Green Halloween. Details online. 10 a.m.-5 p.m. Tuesday-Sunday. Through Oct. 25. $4 adult; $2 children. Krohn Conservatory, 1501 Eden Park Drive, Eden Park, cincinnatiparks.com/krohn.
click to enlarge

'A Chorus Line'
Photo: Mikki Schaffner
Sing along with A CHORUS LINE at the Covedale Center
The dancers who back up Broadway productions are called “gypsies.” They lead anonymous lives, but they’re passionate, dedicated performers. They got their star turn in A Chorus Line, a 1975 show about a group of performers competing for spots in the company of a new production. The show was based on composites of real people, but it features some of Broadway’s greatest musical theater numbers. With songs by Marvin Hamlisch — especially “One Singular Sensation” — the show danced off with nine Tony Awards and the Pulitzer Prize. It ran on Broadway for more than two decades. It’s a great choice to open Covedale’s 2015-2016 season. Through Sept. 27. $21-$24. Covedale Center for the Performing Arts, 4990 Glendale Ave., Covedale, 513-241-6550, cincinnatilandmarkproductions.com.
SUNDAY
click to enlarge 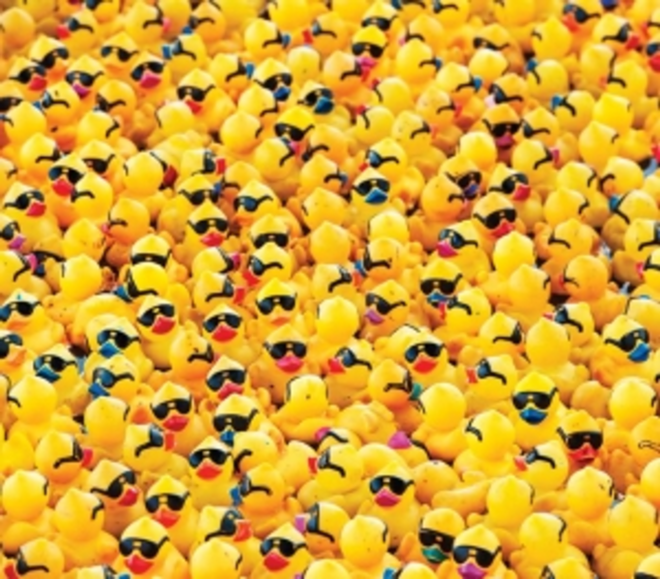 Rubber Duck Regatta
Photo: Provided
Throw a plastic bird in the Ohio River for a good cause with the RUBBER DUCK REGATTA

The fireworks aren't being broadcast on TV this year (WHAT?) so you better head to the actual RIVERFEST if you want to see them

It’s almost Labor Day, and here in Cincinnati that only means one thing: Riverfest featuring the WEBN (and now Western & Southern-branded) fireworks, the ultimate way to celebrate the end of summer. It’s a tradition that began more than 30 years ago when the radio station treated the Tristate to a fireworks display to celebrate its 10th anniversary. Now, nearly half a million people will watch the fireworks — choreographed by Rozzi’s Famous Fireworks — from both sides of the river after an all-day fest featuring live music, family fun zones and vendor booths. Make sure to stake your fireworks-watching spot out early — they go fast. Noon-10 p.m. Sunday. Free. Sawyer Point/Yeatman’s Cove, 705 E. Pete Rose Way, Downtown, riverfestcincinnati.com.