A Yes/No Prediction on the Bengals reaching Super Bowl LVII 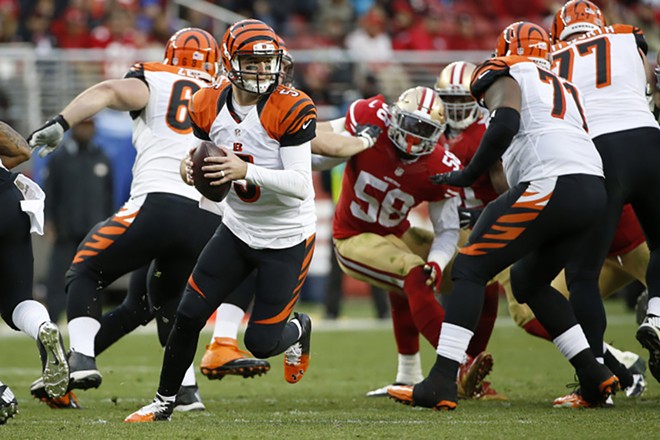 Photo: Tony Avelar/Associated Press
It’s weird for a Cincinnati sports fan to feel confident about anything. The Reds’ only recent playoff appearance came in a Covid-shortened season and ended after two games, while the Bengals… well, let’s just say they were able to draft Joe Burrow and Ja’Marr Chase for a reason. But high draft picks only mean something if you’re able to array them into on-field production, and let’s give credit to Zac Taylor. Two years after finishing as the worst team in the league, a Burrow-led Bengals came within a minute of winning it all.


They often say in sports that it’s not about getting to the peak, it’s about staying there. And though eventually defeated by the Rams, the Bengals are reigning AFC Champions. That’s not nothing, but the question they now have to answer is whether they can repeat that feat and start to show signs of being a great Cincinnatti Bengals side, and not just one that has had a great season. The answer will only be known for sure in January (we hope), but there are some facts to mull over before getting too optimistic, or pessimistic, about what’s to come.

If you listen to sportsbook experts, then you won’t be pre-buying “Bengals AFC Champions 2023” sweatshirts right now. Not only are they not favorites to return to the big one, they’re considered to be touch and go for the playoffs at all. If you’re heading to casinoscrypto.com to find a place to back Zac, then you might prefer to choose a spot to play crypto casino games instead, because if the bookies are right, Cincy will be third in the AFC North behind the Ravens and Browns. Of course, they thought much the same last year, so…

Burrow has an aura of success around him

You expect a #1 draft pick to be league-ready and show flashes of greatness, but Joe Burrow has been more than anyone could have dreamed he’d be so far. His debut season was cut short by injury, but the LSU alum was on target to blow past 4,000 yards up until that point. He then more than met that target on the way to the postseason in his sophomore year. That, mind you, was despite taking a league-record number of sacks behind an offensive line that could have doubled as a turnstile.

About that offensive line…

If you can get within touching distance of the Vince Lombardi trophy when your offensive line is so weak, the signs have to be good when it undergoes an extensive upgrade in free agency. La’El Collins was one of the most sought-after players in the spring, never mind linemen, and the former Cowboys tackle inked a contract to play in front of Burrow this season. He’ll be joined by ex-Patriot Ted Karras as well as Alex Cappa, who was trusted to block for Tom Brady in Tampa. Fourth-round pick Cordell Volson is more of a project player for now, but he’ll have some decent mentors and is a versatile backup option.

There are plenty of positives for Bengals fans, and the team may be the victim of excessive cynicism from bookmakers, but it pays to be a realist, and it definitely helped that the team only had to play one of the Chiefs and Bills in last season’s playoffs. Those two met in the Divisional Round, a week earlier than everyone was expecting before the season, and they took lumps out of one another in a 42-36 overtime classic. Burrow & co. did have a forgiving path to the championship last time out, and it might not be so clear-cut in 2022. Add to that the fact that the Broncos now have a proven quarterback, and the picture is tighter this season.

So, what’s the prognosis?

Looking ahead to the season in store, and predicting with head rather than heart, it’s not easy to see the Bengals in another Super Bowl again so soon. Really, what’s more important is to have another winning season and make the playoffs again. In a fiercely competitive conference - much more so than the NFC - a repeat appearance in the postseason would be a sign of good things from a team that was dreaming of mediocrity not so long ago. The Vault at Richter & Phillips: A Queen City Gem