The beauty of animation is that it’s always evolving.

Cincinnati animator and illustrator Mark Neeley is experiencing that now, as he prepares a new episode of his video series The Aquarium Drunkard Picture Show. An offshoot of L.A.-based online music magazine Aquarium Drunkard, the series launched in 2020 as half-hour episodes that blend music videos, live footage, animated sequences and tunes. Neeley – who lives here in Cincinnati – is tweaking the format for the newest batch, which will be released in May.

The newest episode will not only feature new animation from Neeley but also will bring in work from other animators and filmmakers, including claymation by Owen Summers.

“The format will be similar to a special previous episode we did called ‘Autumnal Equinox,’ which also featured film by experimental filmmaker Jodie Mack,” Neeley tells CityBeat in an email. “It will feature a combination of modern music videos and older live performance footage.”

Neeley develops the series – along with other Aquarium Drunkard content – with the site’s founder Justin Gage. The duo even had a quick taste of national fame when the minds behind Adult Swim, Cartoon Network’s animation programming block, came calling.

Well, until the nation began grappling with the coronavirus pandemic, that is.

“We started on the show because Adult Swim was interested in making it a series,” Neeley tells CityBeat by Zoom. “Some people in their programming (department) had been fans of Aquarium Drunkard and had been talking to Justin about doing it for years, and they finally approached him. I thought it was going to be our big break. I thought we had it locked in, and then COVID-19 hit immediately after.”

Cartoon Network halted production as the pandemic ramped up, but Neeley and Gage’s pilot episode of The Aquarium Drunkard Picture Show aired anyway on Adult Swim’s app just before Neeley’s 30th birthday in 2020. To celebrate, Neeley stayed up with friends until midnight to watch the show go live.

Despite the pause from Cartoon Network, Neeley and Gage decided to keep releasing episodes on Aquarium Drunkard, each one its own unique sonic styling of music and art. Episode 5, for example, opens with a spinning record morphing into a cloud before becoming the black eyes of a skull. The animation zooms out as rain pours, sun shines and colorful flowers grow over a trio of skulls. The animation is paired with a mashup of songs from Indie, Rock and Avant-Garde acts like Silver Jews, Stereolab, Broadcast, Spacemen 3, Nico, Brigitte Fontaine, Richard Swift and John Cale. Neeley and Gage are now exploring bringing the series to other streaming platforms in addition to Aquarium Drunkard’s website and Vimeo channel.

Much of Neeley’s work resides here at the intersection of what he calls “sound and vision,” coined after a David Bowie song of the same name.

“I’m really fortunate with what I get to do. I think visual art, animation and music have always been a huge part of my life,” Neeley says. “I never really saw them coming together the way that they have. And it just seems like a lot of my projects end up that way.”

Though Neeley resides in the Midwest, his projects often are collaborations with people on the West Coast. Many of his pieces are inspired by midcentury psychedelic music like The Beach Boys and The Byrds along with the art that came out of that era and place.

“I have a weird relationship with L.A.,” Neeley says. “When I did my short film called Fragments, it was based on a trip I took out there and for whatever reason, the spirit of that stayed with me.”

Fragments premiered in March 2020 at the Echo Park Film Center in Los Angeles. Since then, it has been shown at a number of film festivals across the country and in Europe. On his website markneeley.com, Neeley describes the short as the “story of how sporadic individual events synchronize with each other due to peculiar timing and ongoing nostalgia.”

Fragments mixes hand-drawn and painted frame-by-frame animation with 35mm film from Neeley’s trip to L.A. with his wife, Jaclyn. The film also juxtaposes Southern California’s warmth and laid-back scenery with rainy gray days back home in Cincinnati. Accompanying it all is a breezy soundtrack by Neeley’s frequent collaborator, Yohei Shikano.

The Beatles are at the center of Neeley’s recent collaboration with Samuels & Scott Ltd., a Pop-Rock duo from Long Beach. Their upcoming Faul! The Musical explores the ever-persistent Paul-McCartney-is-dead conspiracy, an unfounded urban legend that the rockstar died on Nov. 9, 1966, and was replaced by a lookalike. Neeley’s contribution is animated backdrops that will be projected behind the stage. 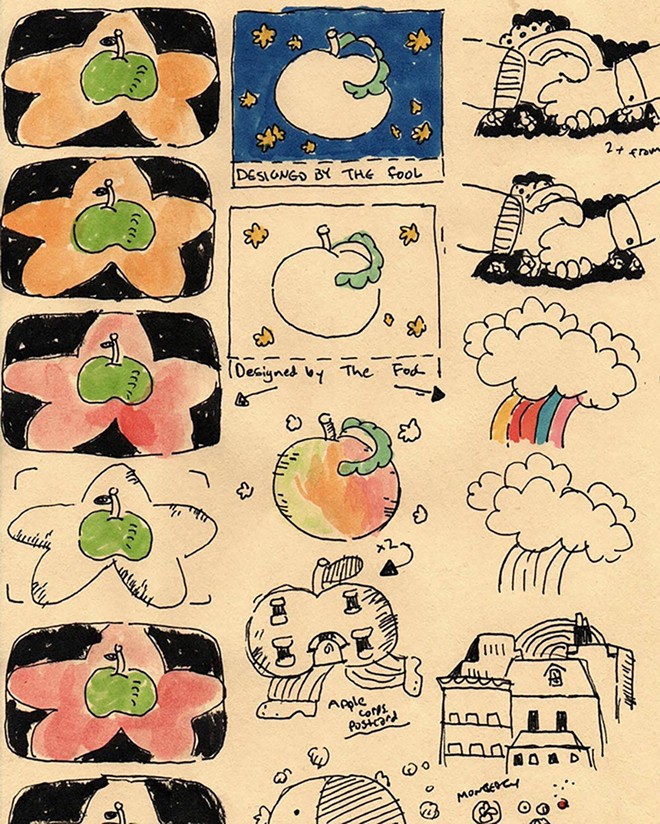 Photo: Provided by Mark Neeley
Faul! The Musical, with artwork by Mark Neeley, will explore the Paul McCartney-is-dead conspiracy.

“I’m pulling really funny things from Beatles history,” Neeley says of his research process. “Like, in London, they had started Apple Records right toward the end (of the band). It was kind of a mess because nobody knew what they were doing on the business side of things.”

Neeley’s passions go back to childhood, he says. He grew up in the mid-90s at the cusp of the pre-digital era, teaching himself to draw by reading books at the library like The Illusion of Life by Disney legends Frank Thomas and Ollie Johnston and The Animation Book by Kit Laybourne. Published in the 1970s, the latter had a huge impact on forming Neeley’s style as a kid.

Neeley still animates in analog today; everything is hand-drawn, colored and painted, he says.

“I just love that aesthetic. I love when you can see the artist’s fingerprints on the work, essentially,” Neeley says. “The other side of that is that I love that era of art in general, whether it’s music or visual art.”

But Neeley’s art isn’t just for those in California. With a studio here in Cincinnati, he offers workshops to creators of all ages at community spaces like the Cincinnati Art Museum, library branches, the Taft Museum of Art and more. The workshops are on pause for now, but he’s looking at bringing them back to life soon.

The artist also is working on a book that will be published through the Cincinnati-based risograph printing studio Cereal Box. Neeley describes the project as an animation sketchbook that will feature storyboards and sketches of the work he’s done, from short films to music videos and freelance work.

“I’m really fortunate with what I get to do. Visual art, animation and music have always been a huge part of my life,” Neeley says. “I never saw them coming together the way they have. It seems like a lot of my projects end up that way.”