Cincinnati Named One of the Best Soccer Cities in America

Cincinnati took home at top 20 spot (out of 295) on WalletHub's list of "Best Soccer Cities." 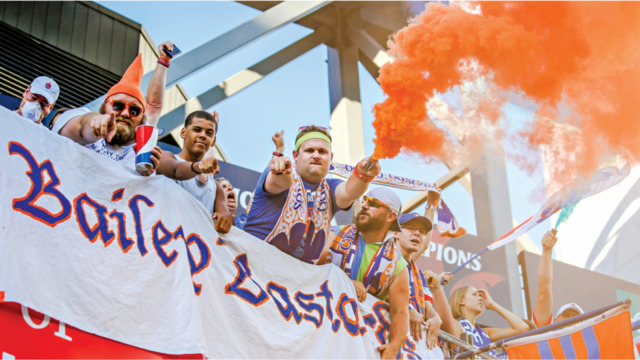 As FIFA and the U.S. Soccer Delegation get ready to visit the Queen City on Oct. 22 to examine Cincinnati as a potential host of the 2026 World Cup, WalletHub has released a new study that may help bolster our cause.

Cincinnati is ranked as one of the top 20 best places in America for soccer fans.

Yes. Cincinnati took home the No. 16 spot (out of 295) on WalletHub's list of "Best Soccer Cities," sandwiched between Louisville at No. 15 and Nashville at No. 17. Los Angeles took home No. 1.

FC Cincinnati beat out Sacramento and Detroit for a Major League Soccer expansion franchise in 2018, and in 2019 became the 24th team to enter the MLS. Before then, from 2016 to 2018, FCC played in the second-division United Soccer League (USL).

The team's brand new $250 million TQL Stadium in the West End opened this year, just in time for the start of the 2021 season.

In addition to our MLS team, Cincinnati is also home to soccer star Rose Lavelle, who — with the U.S. Women's National Team — won a bronze medal in this summer's Olympic Games in Tokyo.

Lavelle, who graduated from Mount Notre Dame High School in 2013, was named the Cincinnati Enquirer's Player of the Year during her senior year. After a career at the University of Wisconsin, Lavelle became the No. 1 draft pick in the 2017 National Women's Soccer League, playing for the Boston Breakers. Lavelle was named MVP during the 2021 SheBelieves Cup's winning match earlier this year.

And she just kicked a bunch of ass in the September USWNT game against Paraguay, held at TQL Stadium.

During the FIFA and U.S. Soccer stop in Cincinnati on Oct. 22, they will be touring Paul Brown Stadium, soccer training facilities and Fan Fest locations. The 2026 Cincy Local Organizing Committee says they have focused on preparing Paul Brown Stadium for FIFA regulations. According to FIFA's guide for bidding for the 2026 World Cup, host stadiums must have a seating capacity of at least 40,000 for quarter-final games, 60,000 for semi-finals and 80,000 for final matches.

While in Cincinnati, officials undoubtedly also will assess the Queen City's appetite for soccer, and local fans can help with that. Soccer fans are invited to a street festival on Walnut Street at Freedom Way, where they can enjoy free LaRosa's pizza and a beer from Moerlein Lager House. The party continues with live music until 5 p.m. At 2:45 p.m., FC Cincinnati supporters will march World Cup flags to Paul Brown Stadium via Gate D on Elm Street. Fans are invited to join the march.