The Cincinnati-specific markers portray a contemporary version of the city and not some time-displaced version of New York, like other films. 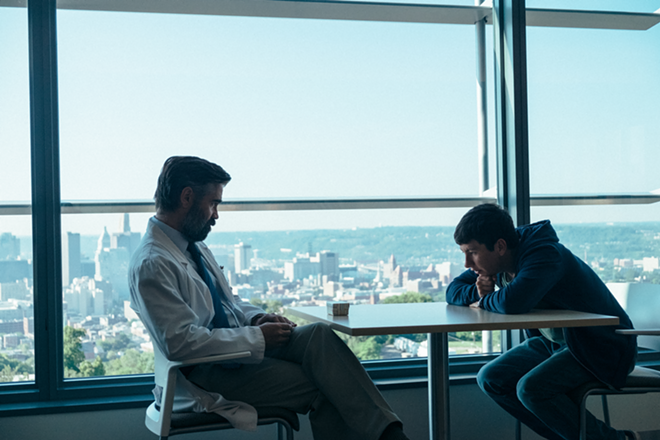 Steven Murphy (Colin Farrell) has the perfect life. He’s a successful heart surgeon married to the beautifully icy Anna (Nicole Kidman). They have two children — daughter Kim (Raffey Cassidy), an emerging teenager, and the younger Bob (Sunny Suljic) — who are the new molds of their parents, just waiting to be broken.

The Murphys, in their successful family-values lifestyle, are such throwbacks to the 1950s that audiences of The Killing of a Sacred Deer, the new release from Greek director/co-screenwriter Yorgos Lanthimos (The Lobster), might want to check early on whether maybe the film’s setting is that bygone time. But it isn’t.

The real treat for the attentive regional filmgoer will be to spot the Cincinnati-specific markers letting them know that not only does the city serve as the location, it is allowed to portray a contemporary version of itself and not some time-displaced version of New York.

But beneath the familiar sites, Lanthimos certainly toys with the city we know and love, twisting it into an alternative version of itself, one as radical as the dystopian-nightmare locale of The Lobster. That film dared to create an adult parallel to young-adult fantasy films like The Hunger Games, in which the only way to remain safely in The City was to take on a romantic partner in 45 days. Otherwise, you get transformed into an animal and released into The Woods. Fear of that renders the less critical into a docile society.

A similar trick gets employed in The Killing of a Sacred Deer, and it has the same chilling effect. One might view this film, too, as a vision of a dystopian future. But there are none of the visual tropes associated with post-apocalyptic cinematic fantasies. They are replaced with the monotony of the everyday — sick patients, school choirs and the listlessness of married sex (the attempts to spice up the latter fail to rise above the sense of being highly choreographed and woodenly executed).

There is an artful, surreal remove on display in the interactions of nearly everyone in this off-center dreamscape. It feels like a blank canvas populated by mannequins with their heads screwed on at less than full tightness. Characters struggle to keep from flopping about, lest the least bit of stress will result in everyone losing control.

This, then, is the environment in which Sacred Deer’s story — a screenplay by Lanthimos and writing partner Efthymis Filippou — plays out. Steven has an uneasy friendship with Martin (Barry Keoghan), a mysterious teenager whose father died as a result of Steven’s surgery.

Martin is using this relationship to inveigle his way into the doctor’s life. It is difficult to ascertain how long this has been going on, but there is a creeping escalation of gamesmanship on the part of Martin. He wants something from Steven — something more than the things Steven is offering, such as an occasional lunch at a neighborhood diner or a chance for a tour around the hospital. Steven, perhaps blinded by a general sense of guilt, fails to recognize Martin’s true intentions.

In an unthinkable moment, Martin visits Steven’s home and meets the family. Lanthimos plays the scene like a menacing comedy of manners, with Martin as the “other woman” or a vampire being invited across the threshold. It is a weird and cunning twist.

There is also a strange scene in which Steven visits Martin and his mother (Alicia Silverstone) in their home, and finds himself  alone with her as she admires his beautiful hands and implores him to stay.  It’s unsettling because the mother-and-son relationship seems so surreal. For that matter, so does the mother, herself. It’s a hard scene to forget.

And then the world becomes maddeningly real, in what would otherwise be a crazy moment. Steven’s son Bob falls prey to a mysterious physical ailment, losing control of his body and becoming unable to walk. His parents, these two accomplished and controlling people, can do nothing to cure him, much as they try.

Martin issues a chilling curse. Steven must kill one family member to atone for the death of Martin’s father. Otherwise his whole family will fall ill and die. Our dread about what might happen next builds.

Martin’s curse on the American family features a doozy of a psychological dilemma. In our current reality, the notion of owning and atoning for one’s own sins seems to be at the forefront of everyone’s attention. Every word in every statement and social media utterance gets parsed beyond recognition for contrition.

But what if words of apology are not enough? We all worry about that. Lanthimos and Filippou are ahead of the curve in thinking what might come next. They take us back to the God of the Old Testament. One can imagine hearing his tough questions: “How much do you love me?” “How guilty do you feel about the bad things you’ve done, the harm you’ve caused to others?” “How much are you prepared to suffer?”

And, as we know, suffering through the consequences of a bad decision or mistake is never limited to just one individual. The Killing of a Sacred Deer shows us that the nature of suffering and the stain of guilt looms over us all. (Opens Friday.) (R) Grade: B+

Cincinnati Locations Featured in Killing of a Sacred Deer

• Steven’s house is in an East Side neighborhood in the hills above California Woods Nature Preserve.

• Martin’s home, which he derides as being in a run-down neighborhood, is in Hyde Park near Wasson Road.

• Steven and Martin meet at Northside’s Blue Jay restaurant. They also are at the Covington riverfront.

• The hospital scenes were shot at the new Joint & Spine Center building at Christ Hospital.

• Anna has an uncomfortable meeting with one of Steven’s colleagues at downtown’s Red Fox Grill.