Jason Dunham has been lighting up Stonelick Township for years. 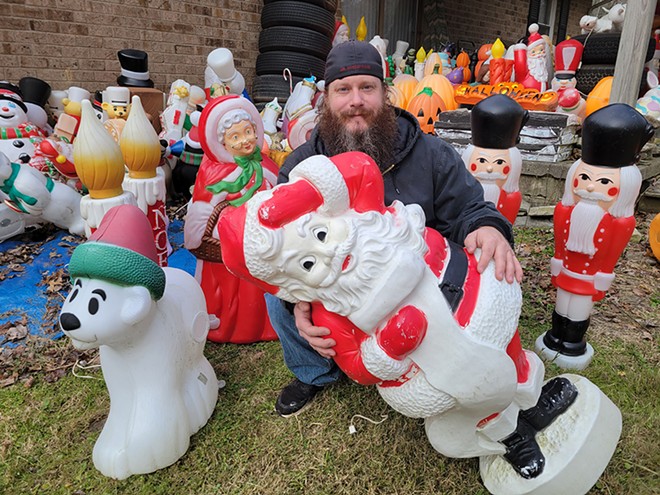 Photo: Allison Babka
Jason Dunham holds one of his 150 Christmas blow molds behind his house.

There’s a special tradition in Cincinnati as the winter holidays approach. But you won’t find this one downtown, at the Cincinnati Zoo or Kings Island.

Dunham gently carries these and other holiday surprises from behind his house in Stonelick Township in Clermont County to his driveway, where he evaluates their condition and begins organizing them per his master plan.

After all, he’s got one of the area’s largest collections of vintage blow molds to prepare for his annual homegrown  holiday light display, and his drive-by visitors are eager for a peek.

“I don’t do it for anything but the satisfaction of seeing a smile on everybody’s faces,” Dunham says. “I am the ‘crazy light guy.’” 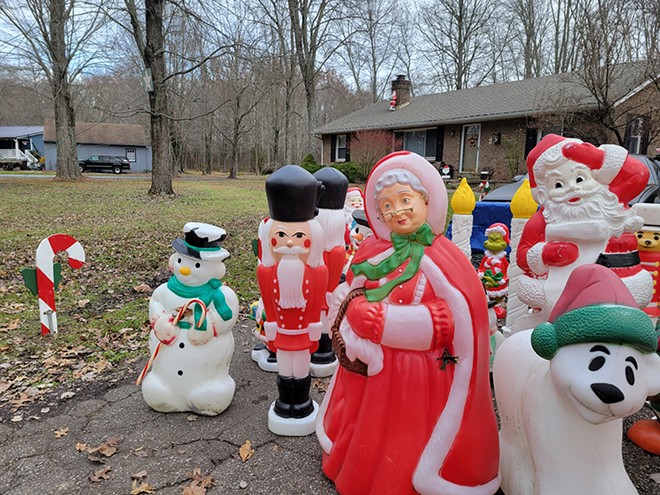 Dunham himself will tell you that he doesn’t necessarily look like the star of a Hallmark Channel Christmas movie. But with his long, wiry beard and head full of gentle curls, he could easily pass as Santa’s cooler, younger cousin. Say “Christmas,” and Dunham’s eyes will sparkle, just like St. Nick’s.

Every winter for several years now, Dunham has been transforming his acre-plus lawn into a holiday wonderland with retro blow molds — those plastic characters that emit a soft glow due to the incandescent bulbs inside them. He artfully arranges mini scenes throughout the yard, like gingerbread men dancing around a cookie house or penguins and polar bears playing near an igloo.

There are also homemade decorations, creations from local crafters and more lights than most people would care to count. Candy canes that Dunham and his father built decades ago line a path from the driveway to the house, and his family’s handmade star hangs from a tree with lights.

Inside the house, it’s just as festive, though the drive-by folks typically don’t get to see that. Each year, Dunham displays an extensive Christmas village scene and puts up several Christmas trees.

Grinchy adults might say this is the house where Christmas threw up. But those who have kept their holiday wonder see something else — an opportunity to feel that Christmas enchantment again, put forth by someone entirely dedicated to giving people joy.

“I want them to just enjoy life, you know?” Dunham says. “Especially the past couple of years. If I can bring a little joy to people’s life with all the craziness going on, I’m happy.”

Dunham comes by his Christmas spirit naturally, inspired by the family traditions that took place as he grew up in Milford. His mother decorated inside their home with Santa Clauses on the mantle and a train under the tree, he says. His father hung the lights, built his own creations and displayed several blow molds. As a kid, Dunham eagerly looked forward to helping his parents put it all together.

That didn’t change even as Dunham became older and moved out of his childhood home, insisting on pulling out the lights and decorations despite his parents’ waning interest.

“I definitely came from a family that did great for Christmas. I just took it an extra 10 steps,” Dunham says.

His parents were the catalysts for his blow mold obsession, he says. As they began downsizing their belongings, he scooped up their big candles, Santa and other molds, determined to showcase them at his own house.

“They always like coming out to see everything. A few aunts and uncles always make a special trip out, too,” he says. “As a little kid, we used to drive around. My parents would take us driving through neighborhoods looking at Christmas lights, and I always enjoyed doing that. Then I wanted to be one of those houses that everybody went and looked at.”

Over the years, Dunham has added to his collection. A reindeer here. An elf there. He’s scooped up finds on Facebook Marketplace, Craigslist and eBay. He’s become a regular at local vintage and estate sales. Friends began unloading their unwanted items on him.

“If there’s one I don’t have, I definitely try to get those, because it’s just fun to see how many different ones there are out there,” Dunham says of the molds.

Before Dunham knew it, he’d amassed dozens of the coveted lawn decorations. And he’s proudly displayed them all, year after year.

But that wasn’t enough.

He knew that Christmas could become even bigger. 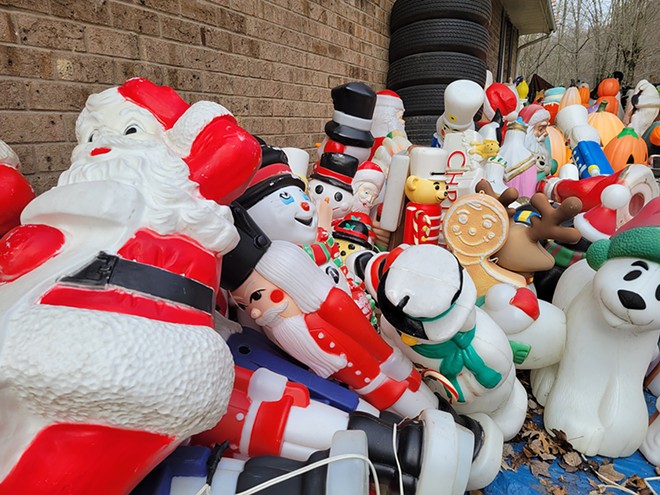 In 2020, Dunham learned of an estate sale that featured dozens of vintage blow molds. It was as if his own plastic angels began singing “Hallelujah.”

“When I went to that estate sale last year, it was in two barns, and it was just packed from floor to ceiling, front to back, with stuff,” Dunham says.

He took them all. Every single one.

In a feat of dedication, Dunham made five trips to transport his blow mold haul back to his home via a pickup truck.

“I just kind of wedged them in there, said a little prayer, and off we went,” Dunham remembers. “The looks I got driving down the highway with a truck bed full of every shape and size and character staring at people…”

Dunham says that the people in charge of that estate sale — friends of the deceased — later came out to see his holiday display.

Dunham's Holiday Display by the Numbers

Because many of the blow molds Dunham acquires are from the 1960s, they often come with issues — chipped paint, blown lights or layers of grime. That doesn’t stop him, though. Dunham just buys duplicates to fix, swap or sell.

“Even if one gets a crack in it, I’ll notice it and kind of mend it. Some of them get paint wear on them and start to fade,” Dunham says. “Sometimes I’ll even buy broken ones just to use them for the parts for (other) broken ones, because some need the actual light fixtures replaced.”

“No blow mold goes unused around me.” 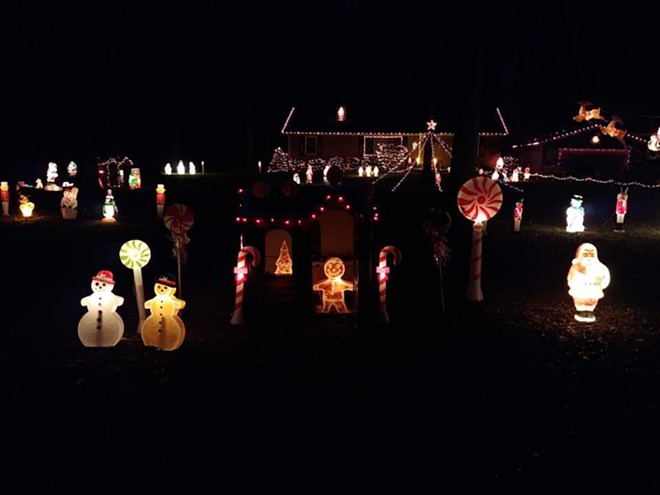 Dunham leads CityBeat through his yard to the back of the house, where every available space is piled high with blow molds that will be added to this year's display. Here, molds from multiple holidays mix before landing in their final slots on the display map in Dunham’s head. Christmas Mickey Mouse leans against a vampire. An Easter lamb gets cozy with several reindeer. 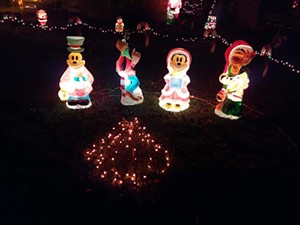 Photo: Provided by Jason Dunham
Mickey Mouse and the gang hang out in Jason Dunham's 2020 display.

Dunham now has hundreds of blow molds, estimating that he has about 150 for Christmas, 91 for Halloween, 30 for Easter, a handful for Valentine’s Day and Thanksgiving, and even a shamrock for St. Patrick’s Day.

He also has several pop culture molds, like the Three Stooges, a giant Big Boy, a large Ronald McDonald bust and what has to be a rare mold of ‘50s animated magpie Heckle (or possibly his identical pal Jeckle).

“It is overwhelming when you just kind of walk back and look at it all,” Dunham says as he pulls more characters for the front yard. “I’d love to find, like, an old building or something to turn into a museum of old stuff like this, but there’s a point where funds kind of prohibit some of the wants and dreams, you know?”

Dunham plans to keep his Christmas display up through early in the new year, depending on the weather. He wants to prolong the holiday magic for as long as he can and help visitors remember what brought them joy in their early years.

“What better memories than of being a child? I’m just a big kid with more expensive toys than I used to (have),” Dunham says.