Attending the show has become its own 'beloved holiday tradition.' 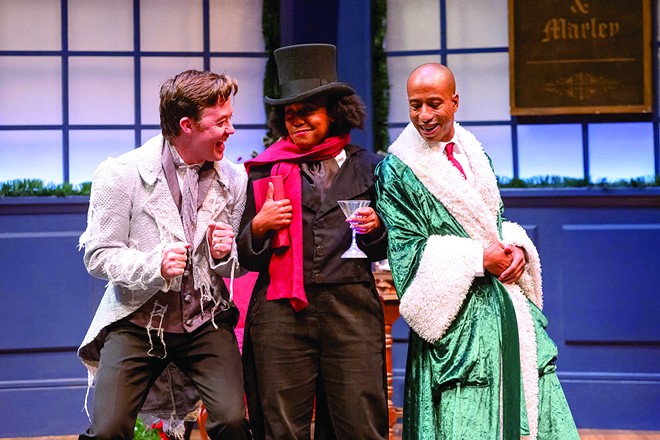 It’s a bit of an irony that the biggest long-term hit for the city’s classic stage, Cincinnati Shakespeare Company, is a show that pokes fun at “beloved holiday classics” (aka “BHCs”) — Every Christmas Story Ever Told (And Then Some!) by Michael Carleton, James FitzGerald and John K. Alvarez.

It begins as another iteration of Charles Dickens’s A Christmas Carol but quickly goes off the rails when two actors rebel against a colleague intent on staging yet another iteration of the holiday staple that’s been produced by countless theater companies across America (Cincinnati Playhouse in the Park has taken a break from producing its version of A Christmas Carol this year with a promise of a new adaptation for 2023, and Cincinnati Landmark Productions is offering a revival of its musicalized version of the show at the Covedale Center for the Performing Arts).

Every Christmas Story goes off on a merry jaunt through pop culture favorites such as It’s a Wonderful Life, Rudolph the Red-Nosed Reindeer, A Charlie Brown Christmas and more. The theater annually ramps up the frivolity and keeps this annual production fresh and fun with send-ups of everything from Dickens to Dr. Seuss in an evening of hijinks and ad-libbed, topical humor. In advance publicity, Cincy Shakes gently warns that this is “a show best enjoyed by adults and older teens; it is not recommended for any theatergoers young enough to believe in Santa Claus.”

“This show is predicated on a familiarity with pop culture. We look at the recent iteration and back at the original script as well,” says Cincy Shakes veteran Jeremy Dubin, who has been the show’s director for 15 of its 16 years (the show did not premiere in 2020 due to the COVID-19 pandemic). “But over the years we’ll take some time at rehearsals and add some things. The actors absolutely contribute to the process.”

Justin McCombs, a rubbery comedic veteran, has been in the show every year from the beginning. Dubin praises McCombs’s ability to “exercise his inner child.”

Recent additions to the show Geoffrey Warren Barnes II and Candice Handy bring their own senses of humor to the staging, coming up with personal bits that hit the audience’s funny bones night after night.

Cincy Shakes has its own particular take on one aspect of the show: Drunk Santa.

“[The character] was a creation when we started the show in the courtyard at Arnold’s Bar & Grill back in the day,” Dubin says. “It was a creation of necessity — a kind of stage manager, crowd wrangler who played a boom-box with sound cues. It was fun interacting with the crowd, and it became more and more a beloved part of the show.”
After several years, the show outgrew Arnold’s and moved to the company’s former Race Street theater. By that time, Drunk Santa had become firmly installed as his own “BHC,” a presence on the side to throw in snarky comments.

This year, the completely improvised role is being undertaken for the first time by Colleen Dougherty, a three-year veteran with the company.

“She will find her way. It’s out of the brain of the actor and in reaction to the crowd. Colleen is the youngest member of the cast, the first Gen-Z actor to perform in the show,” Dubin says.

Since moving to the new Otto M. Budig Theater, the show has more space.

“We’ve expanded the set,” Dubin says. “We have this big reveal moment. When the audience comes in, it’s traditionally Dickensian. Then the entire set flips around to an over-the-top scene. Our designer says, ‘Christmas is thrown up.’ It usually garners applause from the audience.”

Asked to pick his favorite moment, Dubin cites McCombs’s demented and silly performance in a riff on Dylan Thomas’s reverie on A Child’s Christmas in Wales, misunderstood here as A Child’s Christmas with Whales. He comes onstage in a silly pirate’s outfit.

“And every year, we add a new element. After 16 years, he’s really loaded down — parrot on one shoulder, an octopus on another, eye patch, three swords, a peg leg,” Dubin says.

Dubin also cherishes McCombs’s portrait of Mr. Gower in the second act’s mashup of It’s a Wonderful Life with A Christmas Carol.

“He plays him with this big cigar.” Just describing it, Dubin begins to laugh. “I have tears in my eyes every time I watch him do this.”

The show continues to break Cincy Shakes audience records annually, and its run has been expanded to meet the demand.

“We had to add more and more chairs to that courtyard,” Dubin recalls about the early years at Arnold’s. “We outgrew that and moved it to our old theater. We were still selling out the weeks before Christmas, so we kept pushing back and back.”

That’s possible now at the company’s new theater in Over-the-Rhine.

“Those actors are working hard,” Dubin points out in reference to their packed performance schedule.

After a decade and a half, Dubin says he still has great fun staging the show.

“It’s a joy and I love it. I love the people. I pop in numerous times during the run, stick my head in from the lobby when a bit’s coming up that I want to watch,” Dubin says.

Every Christmas Story Ever Told is perfect for date nights, families with older children and teens, and company holiday outings. Theatergoers are encouraged to arrive with Christmas sweaters and Santa hats and enjoy festive drinks at the lobby bar before (and during) the show! Attending the show has become its own “beloved holiday tradition.”

Every Christmas Story Ever Told (And Then Some!), produced by Cincinnati Shakespeare Company, continues through Dec. 31 at the Otto M. Budig Theater, Over-the-Rhine. Info: cincyshakes.com.