The comedian takes the stage at the Taft Theatre for an evening of all-new comedy (and to promote her new book, 'Kathy Griffin’s Celebrity Run-Ins'). 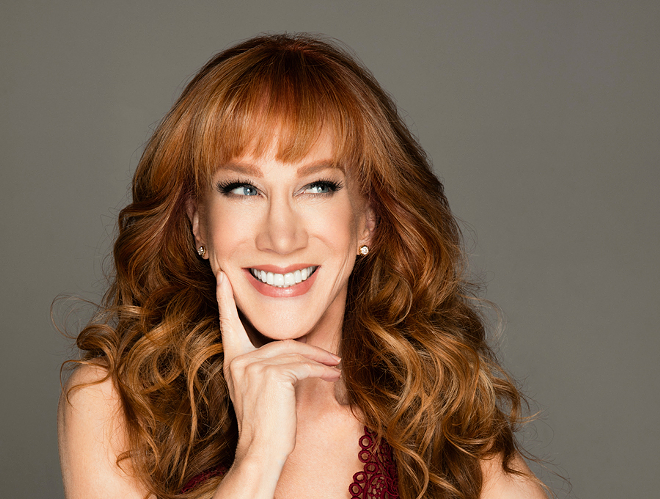 Photo: Mike Ruiz
Kathy Griffin’s break came co-starring with Brooke Shields in the sitcom "Suddenly Susan."
“I love TV, I love that I have won Emmy awards, I love that I have a Grammy for best comedy album,” says comedian/actress/author Kathy Griffin, who appears at the Taft Theatre on Friday. “I’m a feminist. I feel like I have to list out my achievements every five minutes.”

Those accomplishments aside, Griffin is currently fascinated by how America is reacting to the fact that Donald Trump is now president of the United States. And she’s not alone in that. She finds her audiences are following him, too — often with concern. “Everyone is saying ‘Oh, my God, we need to laugh,’ ” she says. “It’s definitely a different time out there. I’ve been doing this for a long time and I’ve never seen anything like it.”

Known for the celebrity-inspired humor that was featured on her Bravo network reality show Kathy Griffin: My Life on the D-List, Griffin uses the fact that another celebrity reality-TV host is actually occupying the White House in her material.

“And (with) a cast of characters,” Griffin says. “Bannon, Kellyanne Conway and the rest — they look like the final scene of Intervention.”

Griffin has a theory about Steve Bannon, the inelegant-looking assistant to the president and chief strategist who previously headed the far-right extremist Breitbart News. She notes it is only a comedic theory, so it’s under First Amendment protection.

“I need someone to tell me that Steve Bannon isn’t doing meth, because I see so much more than booze,” she says. “I don’t just mean the Time Magazine cover. This guy is a hot mess.”

The twist in all this is that Griffin knows Trump, having met him several times over the course of her career. “I’ve known him off and on since 1995,” she says. “I feel very privileged to be able to bring my own personal run-ins with ‘The Cheeto’ to audiences all over, but most importantly to Cincinnati. The Taft Theatre audience needs to hear from someone who has met him several times.”

Griffin does not have a high opinion of the man. “I found him to always be a buffoon,” she says. “But honestly, and I think unfortunately, a lot of people just thought he was harmless. I just thought he was an orange version of one of those idiots on (Bravo’s) Million Dollar Listing.”

To Griffin, Trump was just an eccentric realtor. “Every city, it seems, has this kind of character,” she says. “He was the wacky New York realtor dude that wanted to be famous.”

What surprised her most about him, she says, is how vulnerable he seemed in past meetings with her. “Almost every time I’ve run into this fool, he comes up to me and says, ‘Uh, oh, don’t be too hard on me. I know you’re going to be funny, but you can be tough.’ I find that fascinating.”

Trump was friendly with Griffin’s late friend and mentor Joan Rivers. “I think she got a kick out of him, but I don’t think she knew this (other) side of him,” she says. “I don’t know if anybody knew he was this racist and stupid, because I think you assume that people who have done well in one area or another have a certain acumen or certain talents.”

When Griffin started doing stand-up in the 1980s, she mostly talked about her family and relationships. However, when she was cast in the sitcom Suddenly Susan in 1996, as one of star Brooke Shields’ co-workers, her career moved into a different direction.

“I started being around a lot of famous people,” she says. “And, as you know, I couldn’t keep my mouth shut.”

That show lasted four seasons and was a fantastic experience, Griffin says. “It was a very middle-of-the-road show, but there I was finally getting my overnight success at the age of 36, and in an environment where, for four years, these incredible people came on the show as guest stars. Joan Rivers played my mom, which was heaven.”

Today Griffin lives next door to the very upper echelon of the celebristocracy: the Kardashians. Well, Kim and hubby Kanye West. To prove that fact during a phone interview she opens her door and gives a shout out to Kardashian. “She’s not out there,” Griffin says upon returning to the call. “But if she was, she would easily hear me. It’s wonderful. I live next door to my act.”

Griffin also has become one the last faces we see at the end of each year, as a result of co-hosting CNN’s New Year’s Eve Live with Anderson Cooper for 10 years running. Her often-outrageous antics on that show frequently make her one of the first things people talk about in the new year.

Her current tour is primarily a vehicle to promote her book, Kathy Griffin’s Celebrity Run-Ins, which she describes as a complete index of the people she has met over the course of her career. “A lot of these run-ins or meetings may not be appropriate for my act,” she says. “They might be weird or jaw-dropping.”

While writing the book, she realized she had forgotten meeting some very big names. “I was looking back at my own IMDb page and I did not realize Aaron Paul (Breaking Bad) was a guest star on Suddenly Susan,” she says. “I can’t remember that for the life of me. I had to call up the casting director and ask, ‘Who did Jesse Pinkman play?’ ”

Her tales of celebrity run-ins and meetings are unending. However, Griffin wants to reassure those attending her performance at the Taft that, “If you paid your hard-earned money for the book and you come to see the Celebrity Run-Ins Tour, don’t think I’m going to stand on stage and read from it.

“It’s all new material. How could it not be? I’m not saying I could do a whole new show every day, but with everything going on, I feel like I almost could.”