Keeping it Real at FotoFocus 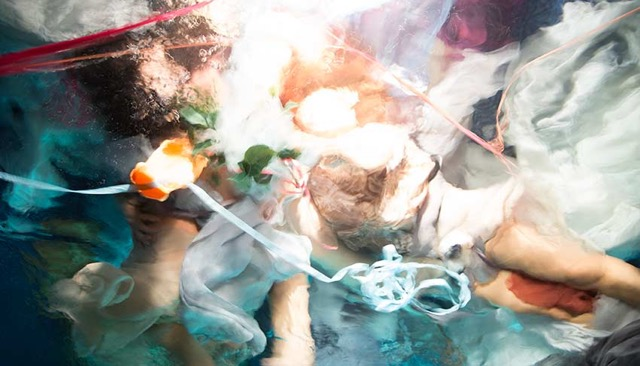 A piece from Christy Lee Rogers' "A Quarter of a Million Miles" series
(Editor’s note – As part of CityBeat’s coverage of the many exhibitions and activities that comprise the October-long FotoFocus Biennial, art writers Kathy Schwartz and Maria Seda-Reeder are contributing online stories about their experiences attending events. Seda-Reeder wrote during the first two weeks of October; Schwartz will be filing during the last two. Here is her first story.)

With FotoFocus adopting the theme of “the undocument,” or the suggestion that photographs create fiction as much as they capture reality, it was a joy to discover Prairie’s refreshingly real student photographers.

David Rosenthal, founder of the Northside nonprofit, introduced cameras and photography skills to teens living in subsidized housing in Covington, Ky. They spent the summer visiting places that in most cases were new to them: Sawyer Point, the top of the Carew Tower, Findlay Market, Washington Park, Krohn Conservatory. Their exhibit, kids again, presents these familiar landmarks through fresh eyes. The show also gives us glimpses of their own community, where they confess they also feel like outsiders.

Their bios are as honest as their images. The teens talk about bullies, daily drama, a lack of friends and their desire to help others. Aliyah has 13 siblings and a daughter. She’s not sure she’s ready to turn 18, but the Holmes High School honor student is planning to get a degree in criminal justice. Iyana wants a house, a job, a car and to not be poor.

While the kids snapped panoramas of Cincinnati’s skyline, they also zeroed in on the little things: a bee on a flower, an insect on a statue, a “love lock” on the Purple People Bridge, a youngster’s wide eyes, two birds on a wire and a key on the ground that says “hope.”

“I’ve never shown work or been part of a performance before,” Iyana’s bio says. “I’m proud of making the simple beautiful.”

(This show is up through Nov. 5 at Prairie, 4035 Hamilton Ave. in Northside. More info: prairiecincinnati.com.)

Camp Washington’s Wave Pool delivers a chilling reality, as The Peeled Eye reminds us that we’re being watched by surveillance cameras. But I found myself drawn not to the photos of people on the street, but to Mishka Henner’s series of satellite images showing pumpjacks in oil fields. At first, I thought it was the swirling and straight patterns alone that attracted me. They resemble paintings, and the English-based Henner has represented his portfolio as homage to Abstract Expressionist Barnett Newman. The green, brown, gray and orange grids also made me reminisce about trips across “fly-over” country. But, finally, I realized I liked these works best because their distant perspective and lack of people meant I didn’t feel like a creepy voyeur. When Big Brother is watching us so much already, I didn’t want to be another intrusive set of eyes.

(This show is up through Nov. 19 at Wave Pool, 2940 Colerain Ave. in Camp Washington. More info: wavepoolgallery.org.)

Manifest questions what a photographic image should look like and examines photography’s influence on other art in REAL-PHOTO and PHOTOREAL. The “undocument” definitely exists here — you just can’t be sure which medium created it.

Most of the drawings and paintings in PHOTOREAL cause double takes. Charcoal, graphite and pencil drawings capture every shadow, freckle, crease, feather or splinter that a black-and-white picture would. Color portraits in oil or acrylic radiate light and warmth. These photorealistic works are the visual equivalent of the old “Is it live, or is it Memorex?” campaign.

Meanwhile, in REAL-PHOTO, many of the pieces made via photographic imaging resemble paintings and drawings. Photographer Rachel Wolf of Portland, Ore. sets her camera aside to make abstract pictures in the darkroom with the chemicals used in film developing. Dayton artist Francis Schanberger turned to yellow onion skins and the anthotype process to create a haunting image of a woman’s slip.

Manifest is thinking outside the frame. Find out more during a Lunch and Learn at 12:15 p.m. Oct. 20.

(These exhibits are up through Oct. 28 at Manifest, 2727 Woodburn Ave. in East Walnut Hills. More info: manifestgallery.org.)

For an immersive FotoFocus experience, head to Miller Gallery in Hyde Park. The façade has been wrapped with the swirling underwater photographs of Christy Lee Rogers. Once inside, bright and fluid images as large as 4½ by 6½ feet surround you as if you’re walking through an aquarium, or maybe outer space.

Sensations of vulnerability eventually give way to freedom. In an interview at Over-the-Rhine’s Design Lab, where her work also is hung, Rogers says her models describe a similar feeling.

Rogers, who’s from Hawaii, shoots at night, working above a swimming pool as her subjects interact with ribbon, fabric and one another. Her painterly effects, which have been compared to Caravaggio’s and other Baroque masters, are achieved without Photoshop. She relies on light, shutter speeds and refraction.

The series title is A Quarter of A Million Miles, a reference to the desire to get away and rediscover the goodness in each of us. Her obscured models stand in as Everyman or Everywoman as they experience rebirth in cleansing waters or heavenly nebulae.

“I want them to let go,” Rogers says. “People don’t understand their own magic.”

(This show is up through Oct. 22 at Miller Gallery, 2715 Erie Ave. in Hyde Park. More info: millergallery.com.)