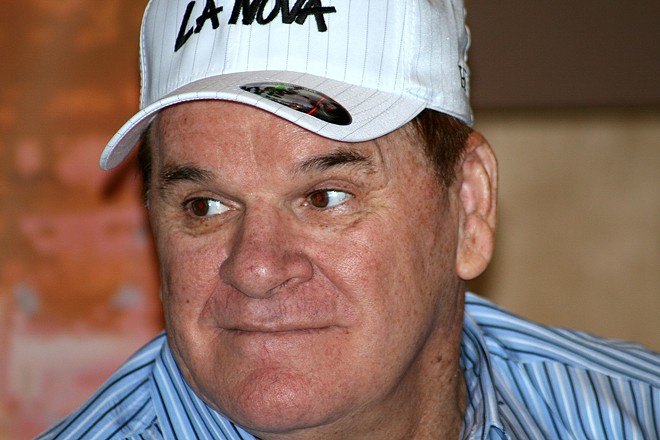 "Charlie Hustle" hit a speed bump this weekend when a reporter asked about his alleged dalliances with underage girls.

Former Cincinnati Reds legend and manager Pete Rose was on hand Aug. 7 when the Philadelphia Phillies honored the 1980 World Series championship team at Citizens Bank Park. Rose had played for the Phillies 1979-1983, helping them to multiple division and league titles in addition to the Series win.

Rose received a long standing ovation during his introduction, according to reports. In 1989, Major League Baseball banned Rose for life for betting on the Cincinnati Reds as a manager, so this was the first time he'd been on the Phillies' field since being ousted.

The fans at the stadium seemed to love Rose (well, most of them – video shows that he also received plenty of boos), but he didn't exactly endear himself to reporters.

Alex Coffey, a reporter who covers the Phillies for the Philadelphia Inquirer, shared on Twitter what her exchange with Rose was like during the media briefings at the game. She said she had asked Rose if he thought his "presence here sends a negative message to women," given the allegations that he had initiated a sexual relationship in 1973 with a girl who was younger than 16 years old. As it is now, the age of consent in Ohio at the time was 16 years old. The Ohio Revised Code permits adults to have "sexual contact" with people as young as 13 years old as long as those adults are fewer than four years older than the other person; Rose would have been around 32 years old at the time, so sexual contact with a minor would have been considered statutory rape.

In 2017, court documents showed that Rose had filed a defamation suit against John Dowd, MLB's attorney who had alleged that Rose had committed statutory rape. Among the ensuing documents was a sworn statement from a woman who said she and Rose had had sex before she turned 16 in the 1970s, both in Cincinnati and beyond Ohio's borders. Rose eventually admitted that he and the girl had sex, but only after she turned 16, he said. The suit was settled and dismissed later that year, but not before Rose lost his Fox Sports commentator gig and his induction into the Phillies' Wall of Fame was cancelled.

"No, I’m not here to talk about that. Sorry about that. It was 55 years ago, babe," he told the female reporter during an era in which more women are calling out men who had abused or assaulted them.

I asked Pete Rose what he would say to people who say his presence here sends a negative message to women. His response: “No, I’m not here to talk about that. Sorry about that. It was 55 years ago babe.”

Rose continued to dismiss the media's questions about his alleged involvement in repeated sex crimes. Coffey said that a reporter from the Associated Press asked Rose about his interaction with Coffey, with Rose replying, "Who cares what happened 50 years ago?"

According to Coffey, Rose also said, "You weren't even born. So you shouldn't be talking about it, because you weren't born. If you don't know a damn thing about it, don't talk about it," seemingly implying that one has to be of a certain age in order to note that sex with minors is bad.

Coffey said that Rose – or one of his representatives – later went into damage control mode, as "Charlie Hustle" offered to sign 1,000 baseballs for her if she was "offended" by what he'd said.

Rose was made available after the ceremony. Someone, maybe an agent, said he had something to say to me, but he didn't seem to know he was expected to say anything. He asked if he'd offended me, and said "will you forgive me if I sign 1000 baseballs for you" before saying "sorry" https://t.co/w5ikH1jKDR

The Philadelphia Inquirer published Coffey's story about Rose on Aug. 7.

Many baseball experts agree that if it weren't for Rose's gambling, he'd be a lock for the National Baseball Hall of Fame and Museum in Cooperstown. According to Rose's website, he has MLB records for the most career hits, games played, at-bats and hitting streaks of 20 or more games, among others. He also had played 500 games each at five different positions: first base, second base, third base, left field and right field. He was part of the "Big Red Machine" of the 1970s – the Cincinnati Reds era that earned the team multiple division and league titles and two World Series wins. Rose went to the Philadelphia Phillies in 1979 and then to the Montreal Expos. He returned to Cincinnati as a player-manager 1984-1986, retiring as a player in 1986.

Report: Cincinnati Reds Legend Pete Rose Requests Reinstatement from MLB Citing Minimal Astros Punishment: UPDATE: The current President of the United States of America agrees with Rose. He tweeted that it was time to "GET PETE INTO THE BASEBALL HALL OF FAME."


But it was Rose's solo manager stint that would do the slugger in. In 1989, Dowd released a report and evidence alleging that Rose had gambled on baseball games, including while managing the Cincinnati Reds. According to MLB rules, managers, players and anyone in key positions are prohibited from betting on baseball in any way. For years, Rose insisted that he did not bet on or against the Reds or any other MLB team and filed multiple lawsuits to stop Dowd's investigation. MLB placed Rose on the league's permanent ineligible list on Aug. 24, 1989. Rose later applied multiple times to have various MLB commissioners reinstate him, but he continually has been denied, with commissioner Rob Manfred saying Rose did not have "a mature understanding of his wrongful conduct."

Cooperstown also barred him from enshrinement in 1991, despite the numbers he'd put up as a player. As with the MLB, Rose petitioned the National Baseball Hall of Fame to consider him for inclusion but has been turned down.

In 2004, Rose finally admitted  that he had, indeed, gambled on baseball.