Cones was largely overlooked after her death but is now the subject of the Taft Museum’s "Craft + Camera" exhibition. 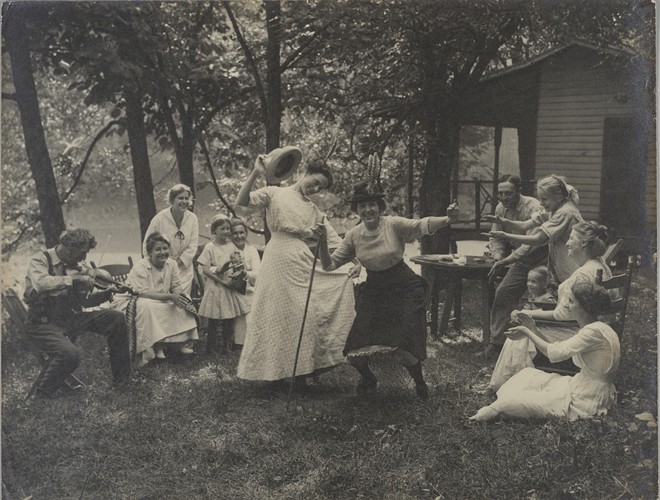 Turn-of-the-century photographer Nancy Ford Cones garnered national attention from the likes of Kodak and National Geographic for her dreamlike depictions of rural life in Loveland. Despite being one of the leading female pictorialists of her time, Cones’s work was mostly lost to history following her death in 1962. The Taft Museum of Art’s latest exhibit, Craft + Camera, is the first major presentation of Cones’s work.

Running through Jan. 15, the exhibit is part of this year’s FotoFocus Biennial World Record, which explores humankind’s impact and interactions with nature. Cones created thousands of photographs between 1900 and 1939, using her 33-acre farm in Loveland as a backdrop. Often drawing inspiration from literary sources, Cones’s art was a true community effort: family, neighbors and friends posed in various whimsical, warm and romantic scenes. Subjects included jovial picnics, frolics in the woods, a mother bathing her baby, curious kittens and more.

Stetler’s first step in preparing for Craft + Camera was locating Cones’s photography, which was dispersed across private collections and museums in Greater Cincinnati, including the Loveland Museum Center. As she investigated Cones’s body of work, Stetler noticed the artist’s particular interest in the printing practice of photography. Cones would create several different and diverse prints from the same negative.

“I actually thought that it was wonderful because I loved the way that it really went against the grain of the way in which museums usually tell the history of photography,” Stetler tells CityBeat. “This is the kind of practice of somebody who was uninterested in being ambitious and going to New York to make some sort of name for herself; she was perfectly content with living on a farm outside of Cincinnati.”

Stetler notes that Cones’s photography pushes back against traditional narratives about who had access to art making. In the early 20th century, a woman living on a farm outside of Loveland might not be who comes to mind when thinking about who an artist is; however, she certainly gained accolades. In 1905, Cones placed second among over 20,000 entries in Eastman Kodak company’s annual photographic competition for her print titled Threading the Needle, which captures her young niece and aunt Percy as the two work together on what appears to be a sewing project. First place went to Edward Steichen, one of the most renowned photographers of the era.

Though Cones was recognized among other top photographers of the era, Stetler says there are a few reasons her work may have been overlooked. She was a woman at a time when female artists had to fight much harder to be heard and represented not only in the field of photography but in art as a whole. Cones was also a pictorialist, an aesthetic movement during the late 19th and early 20th centuries that championed photography as an art form. By the mid-1910s and ‘20s, Stetler says the style passed out of fashion.

“I don’t think Nancy Ford Cones really cared about that,” Stetler says. “She was going to do what she wanted to do and wasn’t really interested in following trends. That’s one reason why national and international interest in her work fell away in the ‘20s gradually.”

Cones reflected on her artistic practice in a personal essay for Photo-Era Magazine titled “Why I Am a Pictorial Photographer,” writing, “To me, the password into the realm of picturemaking is love of the beautiful and the faculty or indefinable something that tells one what is essential, and, most of all, what is nonessential, in making a picture, and without which faculty there is no art.”

Stetler sees Cones’s photography as an extension of her domestic life, which was an essential element to several other early female photographers, such as Julia Margaret Cameron and Gertrude Kasebier. This is because photography gave women a way to explore a new artistic practice without having to forego domestic responsibilities. In Craft + Camera, this blur between art and personal life is evident in Cones’s art. Not only does she use neighbors as models but her daughter, Margaret, appears frequently in fantastical scenes.

In one series of photographs taken around 1920, Margaret and her teenage friends posed as woodland nymphs and dryads. Donning gauzy dresses, and sometimes in nude, the resulting images appear cloudy and surreal as the young women perch atop tree branches or gently reach for a butterfly.

While nudes were seen widely in art history, a placard in the exhibit explains that such photos were rarely published in photography magazines or journals during the early 20th century. Cones publicly exhibited only one of her dryad photographs in her time.

Cones’s husband, James, was also an accomplished photographer. After marrying, they moved to the aforementioned farm known as Road’s End in Loveland, which is bordered by the Little Miami River. James retired from photography to tend to the farm but was deeply involved in Cones’s work. According to Stetler, Cones was responsible for the camera work and compositions while James helped develop most of her prints. The exhibit notes that Cones believed her husband had better penmanship, so he penned most of her signatures.

“I’ve never found another collaboration like that in the history of photography,” Stetler says. “It is so rare for a man to step aside for his wife to have the fame and the accolades of accomplishment. He seemed to be perfectly happy with supporting her work.”

Stetler has been able to visit the Cones household, which is now privately owned and sitting along the Loveland bike trail. While at the home, Stetler noted that the Little Miami River still looks much like what Cones captured in her photographs a century ago.

Craft + Camera, Stetler explains, is a product of curating an exhibit during COVID-19. There were several collections she wished she could travel to or spend more time with before making final decisions, but she also thinks she got lucky with the results.

“It feels very, very satisfying to be able to focus my time and research on somebody that deserves to be known by more people and to have the opportunity to introduce another woman photographer to the public,” Stetler says.