Emery Harris is an eccentric amateur botanist who has lived in treehouse for more than a decade. 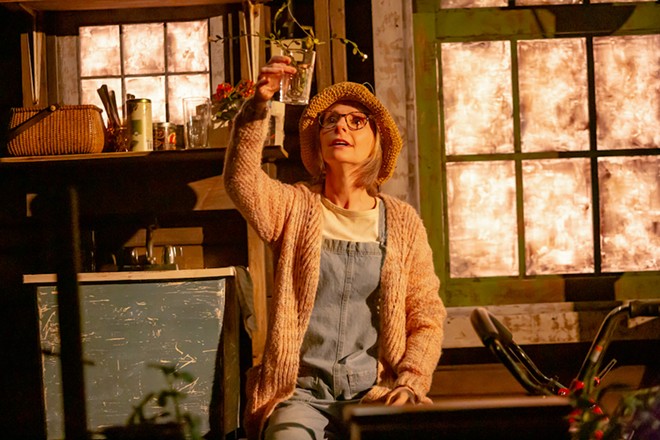 Photo: Mikki Schaffner
Tarah Flanagan as Emery Harris in Rooted at the Playhouse

Deborah Zoe Laufer’s world premiere play, Rooted — a commission presently onstage at the Playhouse in the Park — is a beguiling work. At first, its three offbeat women feel a bit like characters in a sitcom, and they’re certainly the source of much laugh-out-loud humor. But before long, a rather profound message about belief and connection comes through, making this 95-minute show genuinely satisfying.

Emery Harris (Tarah Flanagan) is an eccentric amateur botanist. She’s lived in a treehouse in the branches of an immense oak tree for more than a decade, accessible only by climbing a rope and entering through a hatch that she keeps tightly secured. Despite her lack of scientific training, she’s been conducting experiments to communicate with plants and posting her research on YouTube. Her pragmatic sister Hazel (Tasha Lawrence) has anger issues. She's a waitress in a diner who’s bored and unhappy with life in the claustrophobic small town of Millerville. Hazel looks after Emery, paying bills and delivering food — but she is yearning to find a way to escape and perhaps take her sister with her.

As it turns out, Emery’s research has developed a significant online following of people looking for emotional healing — they have decided she is something of a new-age messiah. Hundreds of them are flocking to the cow pasture shaded by Emery’s tree. One of the seekers, Luanne (Emily Kratter), a quirky, naive young woman, ends up in the treehouse, at first as an unwanted guest and eventually as a catalyst for deeper understanding. 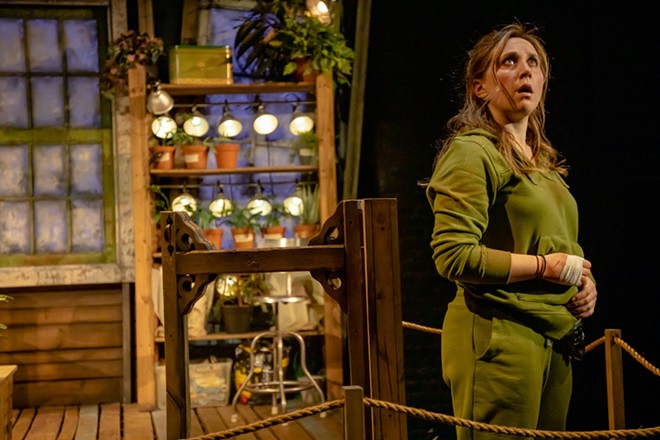 Photo: Mikki Schaffner
Emily Kratter as Luanne in Rooted at the Playhouse

Emery, a serious recluse, has named a dozen or so of her plants — Stuart, Gioncarlo and more — and speaks with them as she attempts to understand their lives and reliance on one another. Laufer uses this as a metaphor for the human need for connection, whether it’s rational or irrational. Similarly, Emery's followers, camping nearby, chant for her to come and speak to them. She really wants them to leave her alone, but Hazel sees this chaotic cult as an exit ramp from Millerville. While Hazel seizes the opportunity, Luanne and Emery find themselves sliding into a meaningful friendship.

Created with a strong whiff of magical realism, the delightful treehouse set designed by Se Hyun Oh is as much a character as the women. At several moments, Emery’s linkage to the natural world is evocatively portrayed. The design incorporates an outside balcony across the front perimeter of the Playhouse's Shelterhouse stage, and each of the women come out occasionally to address or be stupefied by Emery’s worshipers, represented by raucous crowd noise (Megumi Katayama is the sound designer and the source of some lovely musical underscoring). From that position, it is almost as if the audience is playing the crowd.

Directed by Noah Himmelstein, the three actresses deliver increasingly textured presences, amplified by colorful voices. Flanagan’s tentative Emery is endearing, cowed by the attention, shuffling around her tiny space using a walker. Her enthusiastic belief in science and her shock at this unexpected and largely mindless devotion are both real and touching, and her attachment to her plants makes her especially lovable. Lawrence’s exasperated, boisterous portrait of salty and profane Hazel, who loves her sister but desperately wants some change in her life, evolves into an opportunistic schemer with some hilarious notions about how to build upon Emery’s fame.

Kratter played Luanne in 2018 at the Playhouse in the world premiere of another play by Laufer, Be Here Now. In that production she was a tirelessly optimistic and maddeningly cheerful co-worker of the cynical central character. She has retained those amusingly innocent qualities, but Kratter’s portrait makes her more thoughtful and emotionally whole as she comes to grasp what Emery is learning from her plants.

The arc Laufer has created for this story takes theatergoers on a pleasant trip from humor to understanding. In her playwright’s program note, she writes that she’s focused on several themes — “the yearning for meaning and belief, the struggle to be truly present, the power of female friendship and what happens when you slow down and allow there to be quiet and connection in the midst of a chaotic, sometimes frightening world.” That strikes me as something we all need in 2022.

Rooted by Deborah Zoe Laufer is receiving its world premiere at the Rosenthal Shelterhouse Theatre at the Playhouse in the Park (962 Mt. Adams Circle, Mount Adams) through March 20. Tickets start at $30. More info at  cincyplay.com.