“A city needs a bookstore like a body needs a soul,” owner Richard Hunt tells CityBeat.

Two years ago, Covington’s only bookstore and coffee shop almost closed for good. The decade-old store — cherished by locals and visitors alike — was threatened by a significant rent increase, constant construction and closure of its main thoroughfare, the John A. Roebling Suspension Bridge.

Luckily for Roebling Point Books & Coffee, high market rates and constant development surrounding the area were no match for the shop’s popularity and beloved neighborhood status. Owner Richard Hunt struck a deal with the landlord, who saw the value in keeping the establishment open, and they came to an agreement on rent.

So Hunt’s original search for a new location ended up becoming the search for a second location. After options rolled in, he made a final decision to open the second Roebling Books & Coffee in Newport.

Currently, Hunt and his team are spending a lot of time unpacking the some 25,000 books needed for the new spot as they await Nov. 27, this year’s Small Business Saturday and the Newport location’s grand opening.

“A city needs a bookstore like a body needs a soul,” Hunt tells CityBeat. “I think reading fortifies a sense of community and if you’re really going to have a neighborhood or a town that can be proud of itself and the work that it does, a bookstore can be your biggest resource.”

The flagship Covington location has always provided free meeting space for community groups and organizations, an offer that is regularly seized by locals and one that Hunt will duplicate in Newport.

“We’ve always hosted, for example, Kentuckians for the Commonwealth events,” he says. “The community room used to have 20 meetings a week pre-COVID. And that’s where I think the ‘soul’ part comes in. When you have six to 12 to 15 people getting together to talk about a subject they are passionately interested in and want to change, that’s a soul.”

Just across the Licking River, far enough to coexist with the Covington store but close enough to manage, Roebling Books & Coffee in Newport effortlessly blends into the neighborhood. On the corner of Sixth and Overton streets, a sizable outdoor foyer welcomes patrons while the inside offers two large rooms with an industrial-yet-cozy feel. And with plans to offer a grand fiction section along with rare and antiquated books and entire collections from certain authors, this second location isn’t just a bonus, it’s necessary.

Exposed brick peeks from behind bookshelves lining the walls, which will debut a new method for displaying books that Hunt is particularly excited about. Books at the Newport location will be organized with the covers facing out, a tactic that makes more sales, Hunt says. 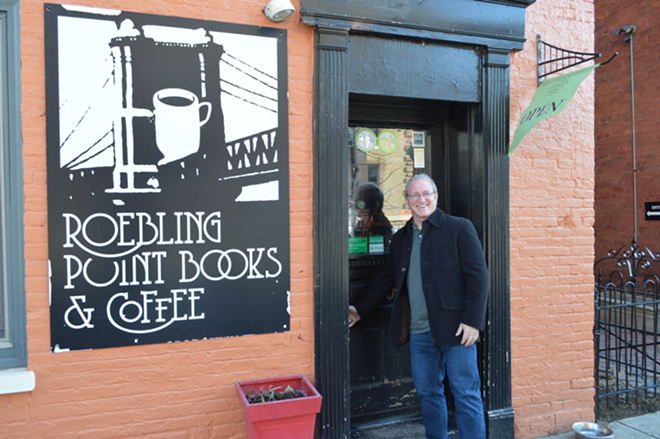 “Having been in publishing for so long, we spend an inordinate amount of time talking about the cover,” he says. “On the spine you get a half an inch and four words, but it doesn’t have the immediacy or the impulse to pick it up. I have been lucky enough to have been to 500 bookstores around the country, and the people that really use covers sell more books, they have more people picking them up.”

But books won’t be the only item luring in customers. Bagels from longtime neighbor of the Covington store Lil’s Bagels will be sold along with other small bites and even soft-serve ice cream.

Of course, as the store name suggests, coffee will always be available and Hunt hopes to make more meaningful connections with other small businesses in the area the same way he has in Covington. A devoted bike-rider, Hunt named Reser Bicycle Outfitters as a target. The facts aren’t yet fixed but the three businesses have harmonized enough to reimagine the age-old three Rs — reading, ‘riting and ‘rithmetic — to “Reading, riding and rolling,” Hunt says, relating the phrase to books, bikes and bagels, while delighting in the opportunity to alliterate.

Author Sheila Williams, who resides in Newport, has seen years of support from Roebling Point Books & Coffee and as a regular customer of Covington’s store, says she is thrilled to see a second location, especially so close to her home.

“They curate books very carefully,” she says. “I’ve done one or two book events with Roebling Point and of course the nature of the bookstore, it’s an indie, so you’re not going to have as many people necessarily but the people that are in the audience are supportive and they are enthusiastic and they have read enough to be discerning. It’s a very special relationship for an author to have a bookstore, especially the independent ones because they know their products, they know the stories that we are trying to tell and they will hand-sell your books if it’s one that speaks to them.”

In her catalog of literature, Williams creates worlds in which women thrive — she delicately recounts struggle and triumph through friendships and mother-daughter relationships and through tales of escaping hardship as told in Dancing on the Edge of the Roof, a book released in 2002 that has since been converted into a Netflix film titled Juanita.

“Books have a special place in our culture,” Williams says. “For those of us who are storytellers, it means a lot to have a place where you feel a part of the group, you are supported by the entrepreneur and you are given an opportunity to tell your story. I’m in and out of the Covington store all the time, and it’s a hangout. It serves as a crossroads. You have a lot of different people, different demographics and that’s important, it’s priceless and I think the new location will provide that for Newport.”

Williams is just one of many Covington regulars attracted to the idea of a second location. Chas Brannen, attorney and unofficial leader of Roebling Point Books & Coffee’s self-appointed “salon,” reiterated the importance of a bookstore’s impact and emphasized the lack of one in both Kenton and Campbell counties. He says the salon, which meets inside the Covington store just about every morning for coffee and conversation, has endured the pandemic and bridge construction chaos and looks forward to changing up the meeting space to Newport every once in a while.

“We talk about culture, politics, the community, of course we talk about the bookstore itself and the bridge and all those sorts of things you would expect,” Brannen says. “And I hope a similar salon develops over there organically. I don’t know if I could get along without it, and I suspect that the good people of Newport will embrace the bookstore just as our neighborhood has.”

The second location of Roebling Point Books & Coffee will be at 601 Overton St., Newport. Learn more on the shop's website.