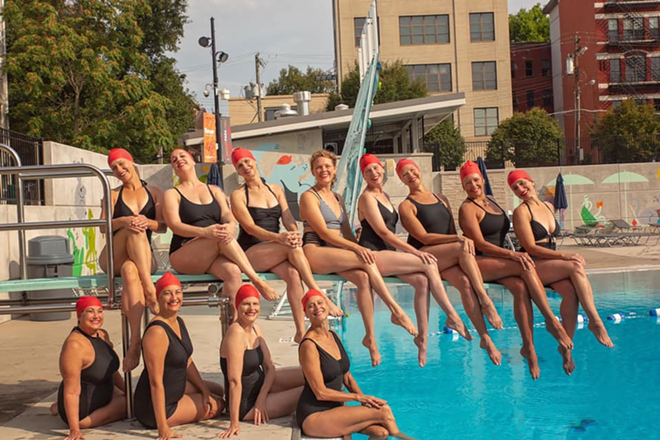 According to local artist, educator and synchronized swimmer Pam Kravetz, the idea behind the swim team evolved from a playful conversation with Christy Samad of 3CDC.

"When (Rhine-Stones co-creator) Carla Lamb and I, being silly, said to Christy, 'There is the Rhino swim team for kids! How about an adult synchronized swim team?!' She called our bluff and supported us 100 percent in providing the pool and lifeguard and love," says Kravetz in an email.

The group has become a way to celebrate, support and challenge each other on the team.

Jodie Linver, team manager, didn't hesitate when Kravetz invited her to be a part of the Rhine-Stones.

"I actually remember doing synchronized swimming when I was young. (Much younger.) Even though the movement didn't quite come back as easily, the joy in it this time is 10-fold," says Linver in an email. "The one hour we have been able to get together at the pool once a week, well, it is by far my most-favorite and looked-forward-to time of the week. I know I'm not alone in this. The joy, the eagerness, the humor — all of it, sheer happiness."

"They have worked extraordinarily hard at something most people over the age of 13 would never dream of trying. The energy and excitement that everyone has brought to the pool each week has really been refreshing," Daniel says.

Looking forward, the team hopes to grow, not only in the amount of members, but also in the age, diversity and gender of the Rhine-Stones.