Midwestern manners and a sense of fashion? Yes, please. 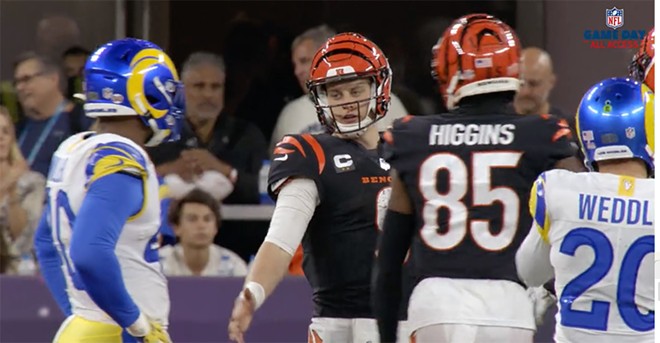 The Cincinnati Bengals might not have won the Super Bowl when they played against the L.A. Rams on Feb. 13, but what the Queen City did win is a collective obsession with quarterback Joe Burrow.

Burrow had to introduce himself to @VonMiller and the Rams D 🤝 pic.twitter.com/rtnv6UVwUM

In the clip, Burrow introduces himself to the Rams' Von Miller, shakes his hand and says, "Nice to meet you brother."

He then says, "What up, Aaron?" to Aaron Donald, and pats him on the back.

And later goes up to Eric Weddle, introduces himself as "Joe" — as if the literal 112 million people watching the Super Bowl didn't all know his name — and tells Weddle, "I loved watching you growing up." Weddle says Burrow had had a hell of a season, tells him to "keep it up" and adds that he loves everything about Burrow: "All ball, no BS."

To which Burrow replies, "Appreciate you brother."

(Weddle is 37-years-old to Burrow's 25, so while no 37-year-old wants to be told by another adult that someone loved watching them growing up, "Joe Shiesty" appears to be genuine here...and not shiesty.)

That is some friendly, sportsmanlike conduct, and while no one is dropping panties in the Twitter replies, people seem to agree Burrow is a solid dude. All that's missing for a true Ohio moment is Burrow saying, "Ope. Didn't see ya there," as he squeezes past Cooper Kupp.

That’s Ohio… we have a different respect for others