The Visual Side of the Vinyl Shop

Growing up on Grand Vista Avenue in Pleasant Ridge, Mike Spitz would often visit Everybody’s Records, a neighborhood and city institution for lovers of recorded music since 1978.

“I discovered Everybody’s from walking down Montgomery Road to go to other stores,” he says. “My middle brother Paul was really into records and got me hooked on it — he’s six years older. And my older brother had a lot of Beatles records, so they influenced me. I just started buying a lot of my early records at Everybody’s and my interests grew. I still have most of them today.”

Spitz, age 50, has been living in Los Angeles since 2000, so remembering the favorite record stores of his Cincinnati youth — he also has kind words for ones that have not survived, such as Norwood’s Record Theater and the Wizard and Ozarka outposts near University of Cincinnati — may seem purely an exercise in nostalgia.

But it isn’t. He’s turned it into a new book, Queen City Records: Record Stores of Cincinnati & Northern Kentucky. It debuts this weekend with signings at two stores featured in the book — 2 p.m. Saturday at Everybody’s and 4 p.m. Sunday at Jet Age Records in Newport. Both will also have live music — 1:30 p.m. Saturday and 3 p.m. Sunday. Spitz’s initial printing is just 250 books; he’ll do more as needed.

A photographer when not busy with his full-time job as a licensed clinical social worker/therapist specializing in the problems of children and teens, Spitz’s book portrays the environments of 13 existing record stores (plus one that recently closed) as sometimes funky and cluttered, sometimes chic and art-designed. He worked on it during visits here to see his family.

Of the 14 stores profiled in Queen City Records, nine have opened since 2010 (including Sugarcube). Three profiled in the book have opened just this year and a fourth (Morrow Audio in Florence) opened too late for inclusion. They have benefitted from the vinyl revival, which has increased the popularity and prices for both used and new vinyl records.

They have also provided Spitz’s book with currency. “There would have been less stores to take pictures of,” he says. “There are new businesses following that resurgence.”

This isn’t Spitz’s first book featuring record stores. In 2015, he published (via Rare Bird Books) The Record Store Book, featuring 50 in the L.A. area. It received national distribution and exposure. But he actually started on the Cincinnati project first.

“In 2011, I got this idea to do some kind of book about storefronts,” he says. “I had seen a book about the storefronts of New York that was very nice. So I thought maybe I’d do a book on those of Los Angeles. But it seemed too broad, too big. So I thought about how I could narrow it down to something more specific.

“Well, I like record stores and I remembered Everybody’s and thought, ‘Why don’t I try that?’ I went home for a visit and went to Shake It, Everybody’s, C&D and Mole’s and took pictures of those four stores.”

But he also thought he should do something larger — if not record stores of the world, then at least of Los Angeles. Among other benefits, he could fit the work around his daytime therapist job.

That resulted in the first record store book, which also featured interviews with record store owners by writer Rebecca Villaneda. “Then we started thinking, ‘Why don’t we do Seattle, Portland, Chicago or New York?’ ” Spitz says. When that idea fell through, he figured he already had begun a Cincinnati project, so why not finish it?

He wound up doing additional photos of the four stores he had photographed in 2011, as well as new ones.

To do interviews and provide history, Spitz hired writer Cassie Lipp, a 2016 University of Cincinnati graduate and also a CityBeat contributor. She responded to an ad that a UC journalism professor had sent.

“I go to record stores all the time since 2012, my first year of college,” Lipp says. “I was writing a paper for my Rhetoric class on Bob Dylan at the time and I went to Everybody’s Records and bought some Dylan records. I thought, ‘Hey, this counts as homework, doesn’t it?’ After that, I started exploring record stores.”

One thing Spitz had learned from doing the Los Angeles book is that he couldn’t just feature storefronts, as his original inspiration — Store Front: The Disappearing Face of New York — did. “It’s what’s inside the store that’s more interesting,” he says.

For those stores that have been around awhile, “they’ve created this nostalgic ambiance for you,” he says. But newer stores can be different. “Some of the newer boutique-y younger stores are tidy, clean, neat and just focus on new stuff. They’re trying to establish something different about them, something unique.”

So what did he find inside Cincin- nati record stores?  Some examples from the book:

• At C&D Record Bar, established in 1957, owner Dave Heil stands in front of shelves full of 45 rpm records while holding an old Andy Williams LP called Lonely Street, in which the late Pop crooner is on a sidewalk, leaning against a building in what looks to be a forlorn part of town.

• At the connoisseur-ish Mole’s CD & Record Exchange, which started on Short Vine in 1974 and moved to Calhoun Street after Dean Newman bought it in 1989, Newman stands behind the counter, proudly wearing a T-shirt with the image of the late guitar god Tommy Bolin and propping up an album by Prog Rock band Spock’s Beard.

• Hail Dark Aesthetics is as much a cabinet of eerie curiosities, or oddities, as a used record store — one photo shows a doll baby’s head atop an animal horn with a stuffed squirrel holding an acorn nearby.

• At Jet Age, which opened this year, the look is spare and retro-modern — there’s a red Formica table and chairs near a coffee bar. The listening station features a turntable with a bright red, futuristic-looking base.

“Having done the first book, I know what works and doesn’t work,” Spitz says. “Usually I don’t know what the store is going to have in it, so I go in with a clean slate. But I tend to gravitate toward the same things. With images of people looking through records, the person has to be interesting. I take pictures of tapes, records — always used records out of the shrink-rap. And if I can, I try to get a shot of somebody who’s not just an old crusty record collector. I really try to break the cliches of record stores.”

He also had an eye for the unusual. “With Hail Dark Aesthetics, what other store has dead animals on the wall?” Spitz asks. “You can’t ignore that — it’s what’s unique about the store. For Jet Age, I made sure to get the Formica table and a shot of the coffee sign in the back.”

“And I always want to get a shot of the manager or the owner,” he continues. “You always get a guy like Dean Newman (of Mole’s) — the older guy, store’s kind of cluttered, very nice but tough veneer. And then the newer stores have the young hipster types with the tattoos. And then you also have the cynical guy whose business is not doing well and he’s pissed off at the world.”

There was one like that in L.A., Spitz says, and also in Cincinnati.

You might call record stores a labor of brotherly love. No less than three sets of brothers own one locally — Darren and Jim Blase of Shake It, Terry and Robert Cole of Plaid Room and Kevin, Tom and Mike Schraer of Jet Age. And there are two women owners — Iris BookCafe’s Julie Fay, who has kept the adjacent Another Part of the Forest open since its founder and her business partner, Mike Markiewicz, died in 2014; and Marilyn Kirby, who has run Everybody’s, with loyal employees, since 1978.

Writer Lipp found her story inspiring. “She was a single mom raising two young sons when getting her record store off the ground,” she says. “She said some of her friends and people working in the music business would help her with her store and her family. I felt that was a neat story, how everybody came together for her as a community.”

That may be the key lesson from the photos and stories that comprise Queen City Records. Each indie record store is a community unto itself.

Queen City Records will soon be available at select record stores and Joseph-Beth Booksellers at Rookwood Pavilion, as well as from mikespitz.com.

PHOTO: Mike Spitz
Julie Fay at Another Part of the Forest PHOTO: MIKE SPITZ
Front window of Another Part of the Forest 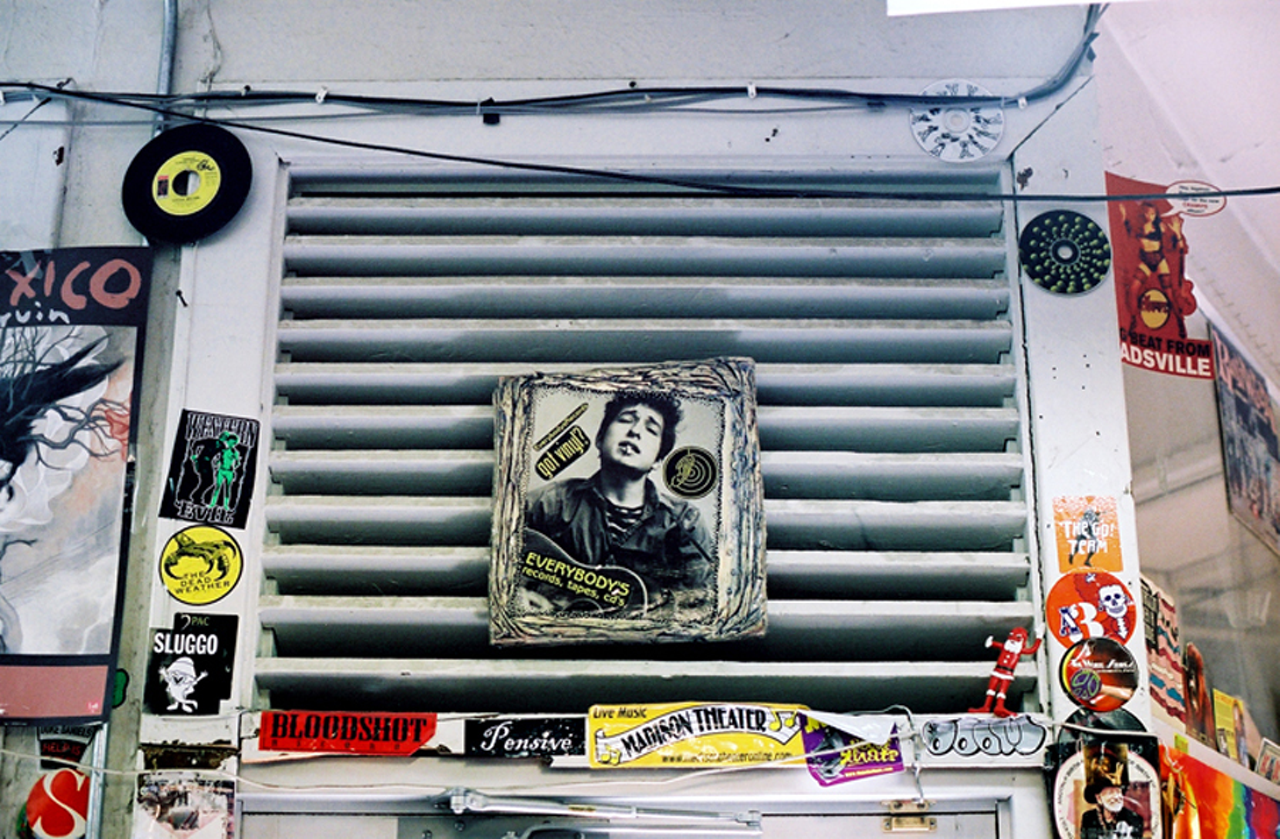 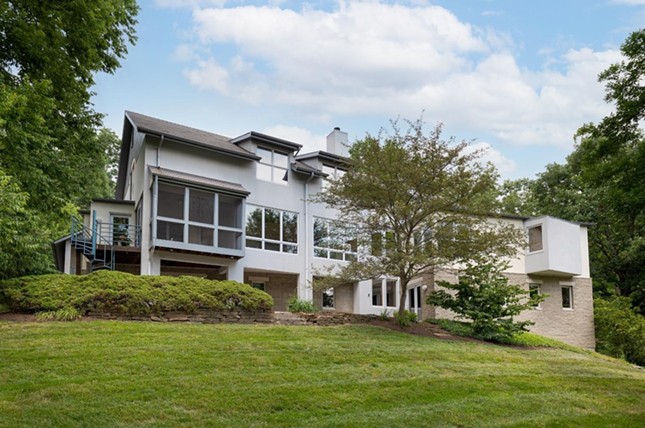 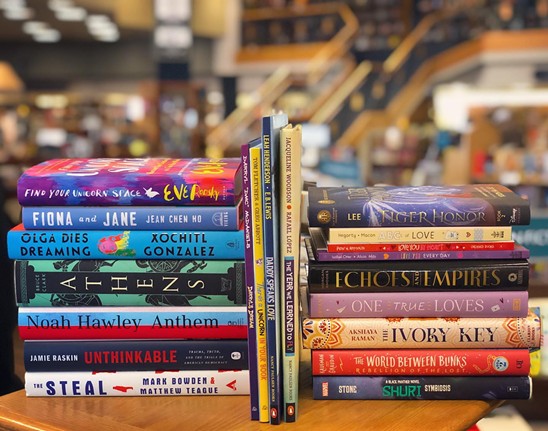 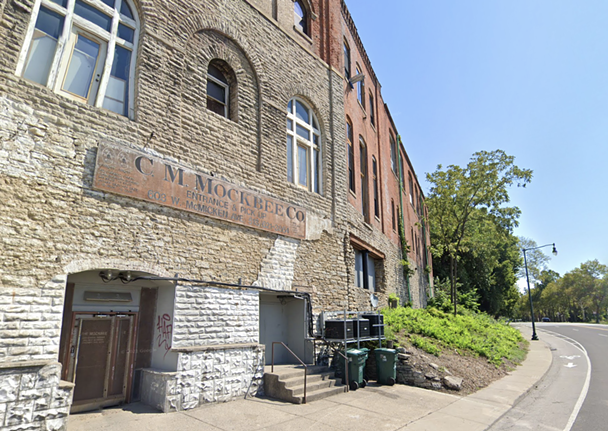 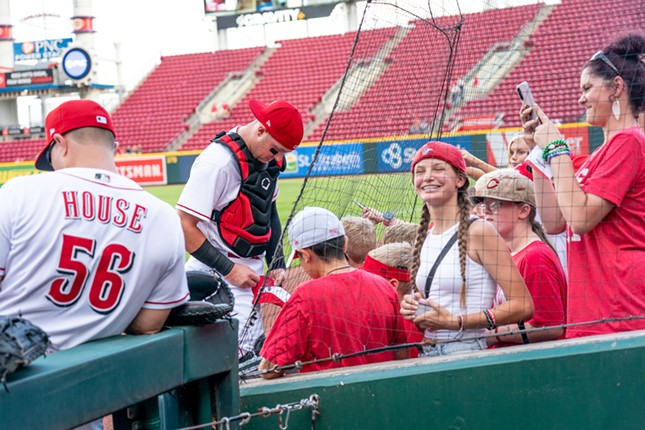 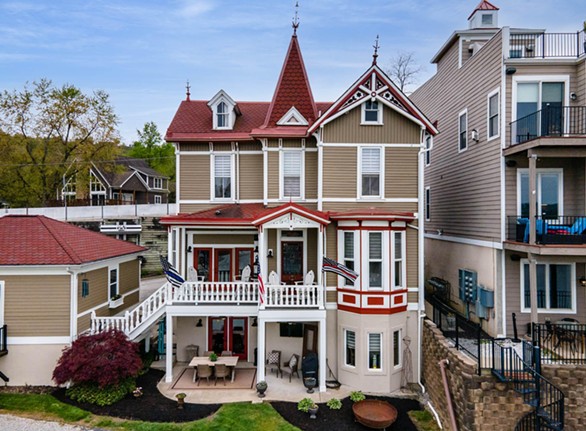