A New Chef, New Menu for Northside's The Littlefield 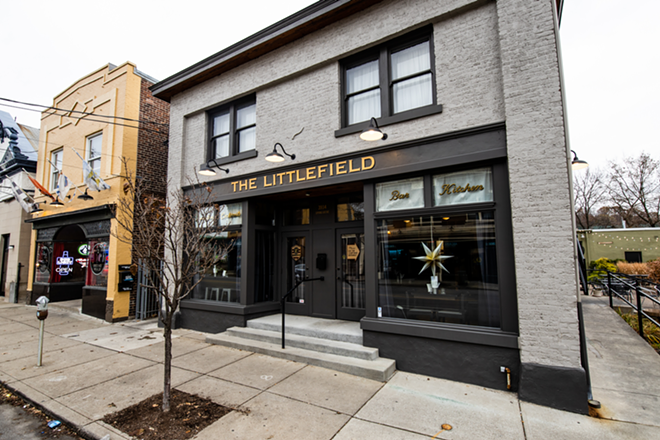 Every neighborhood should have a place like Northside’s The Littlefield. While you might not drive across town to eat, drink or hang there, if it’s close to home, you might just make it your third place. That is, the spot you’re most likely to be found when not at home or work.

I’m not saying that the Littlefield wouldn’t be worth a crosstown trek. But I’m grateful to be able to hop in my car and get there in five minutes. And while this place has become a mainstay since opening about five years ago, a new chef and menu made me think it’s a good time to delve into what’s changed and what hasn’t in recent months.

Ownership of what started as a bourbon bar with a small menu remains in the hands of a quartet of Northsiders, who initially brought in chef Shoshannah Anderson to create the food offerings.

More recently, the foursome — John Ford, Mike Berry, Matt Distel and Chad Scholten — opened a game room/sports bar called Second Place next door to the Littlefield. And after a few years of Anderson’s cooking in a tiny kitchen, the team decided to create a larger canvas for her food artistry: Last December, they opened Branch in East Walnut Hills, with Anderson as head chef.

Branch is a little more ambitious — not exactly formal by any means but leaning more toward elegance with somewhat higher price points and a significantly wider choice of dishes than you’ll find at the Littlefield. 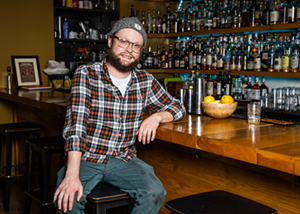 They had kept Anderson’s dishes from last winter all through the spring and summer. There was good food on that menu, but I kept asking why we were eating pot pies and stews — however well executed — in 90-degree weather. And I was anxious to see what Stalf had to offer. Finally, around Labor Day, the wait was over.

A graduate of the Midwest Culinary Institute at Cincinnati State and veteran of several area kitchens, Stalf strikes me as a committed farm-to-table advocate, which made for a smooth transition from the like-minded Anderson. He said that local purveyors provide 70 to 80 percent of the food coming out of his kitchen.

Since coming on board about a year ago, Stalf has reorganized the kitchen and streamlined its staff, which he said makes it easier to move around in a fairly small space. When I asked him how his cooking differs from Anderson’s, he said that while they share many values, his tastes lean toward combining elements of both Southern and Asian cuisines. For instance, the Littlefield’s new brunch menu abounds with Southern dishes such as fried-chicken biscuits ($14) and shrimp and grits ($15), a hickory-smoked pork tostada with Memphis-style barbecue sauce at lunch ($10), and for dinner, the chicken and corn chowder with cornbread ($14) feels about as down-home as you can get.

As for the Asian influences, I think that’s where Stalf’s cooking really shines. His knowledge of (especially) Japanese ingredients is impressive and has resulted in one particular standout dish. The smoked pork katsu ($16) might be one of the best things I’ve eaten all year. On a couple of visits this fall, one of my dining companions tried this unusual pork chop and raved about it, but I didn’t even ask for a bite. For the most part, I don’t eat much pork, but last time I went for dinner there, I decided to see for myself why people were saying “yum” so many times during dinner.

Stalf said he gets the pork from Black Willow Farms in Bellville, Ohio, a small farm that supplies only about seven restaurants with meat from its Berkshire pigs. He smokes a whole loin with a crust of togarashi, a Japanese spice blend that includes sesame seed, dried chiles, ginger and seaweed, among other ingredients. Next, he cuts the loin into half-inch slices, coats the slices with panko and pan-fries them for crispness. It’s topped with katsu — a Japanese curry sauce — blended with a housemade barbecue sauce.

The chop is served sliced cross-wise, and the tastiest morsels tend to be on the edges where bits of fat have gotten crispy. The plate is finished with a cooling slaw made from thinly sliced veggies — local Napa cabbage, red cabbage and carrots — and dressed with a ginger/basil/lime vinaigrette enriched with sesame oil. Spectacular.

A variety of items not particularly Southern or Asian round out your choices. Stalf recommends the Italian beef sandwich on a hearty Cuban roll ($13). It features sliced, smoked chuck roast with spicy pickles, tomato jam and fontina cheese.

If this food sounds like a meat-lover’s paradise, vegetarians need not worry because you have options. There’s an exemplary roasted garlic hummus plate ($13) that works as a shared appetizer or a nice meal for one person. Or try the savory tofu banh mi ($12). Stalf added vegetable risotto ($13) to the fall dinner menu, made with local, seasonal vegetables and manchego cheese.

Dessert was always one of Anderson’s strengths and for the most part, Stalf has continued to offer her pies, cookies and other sweets. His buttermilk panna cotta ($6) topped with seasonal fruit and shortbread crumble tastes marvelous, too.

I haven’t even mentioned the Littlefield’s excellent bourbon selection and reliably good cocktails, so don’t overlook one of the raisons d’etre of the place. Another thing I love about the Littlefield is the inimitable Northside vibe — friendly, eclectic and non-judgmental no matter who you are or how you dress. You’re likely to be greeted by one of my favorite Northsiders, the super-chill Corbly Brockman, who has been a server there from day one and is now head of service and special events. He and the rest of the staff of servers and bartenders will make you feel completely at home — or in your third place.