The eatery takes a design cue from the 1920s with a modern menu of cocktails and sandwiches. 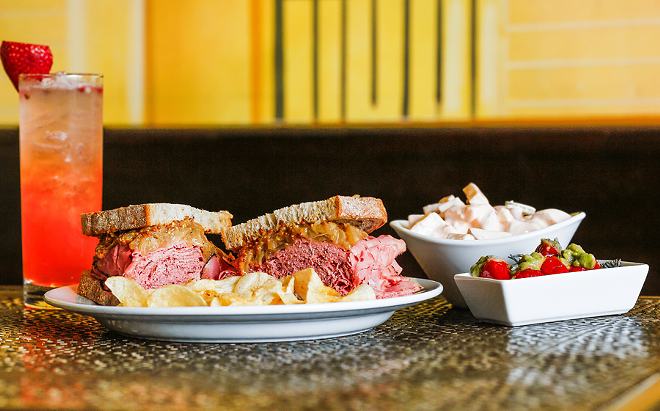 Pleasant Ridge is in the midst of a boom. Montgomery Road has seen an inundation of new places in the past couple of years, including the Shining-themed Overlook Lodge, Nine Giant brewery, Share: Cheesebar and now Grand Central Delicatessen, a bar and deli that blends an Art Deco speakeasy with modern touches.

Jeff Strong and his partner Sheelah Parker opened Grand Central in the spring. Strong grew up on the East Coast — the eatery’s namesake is New York City’s Grand Central Terminal.

Menu items are named after ’20s slang (The Flapper, The Hotsy-Totsy) with interior flourishes like an antique gravity soap dispenser in the bathroom and vintage-looking globe pendant lights, but the bar is contemporary, as is the Indie Rock soundtrack (no Jazz?).

Grand Central is not a straight-up Jewish deli — it spins NYC deli cuisine and injects it with a bygone-era theme and atypical items like guacamole-stuffed peppadews and spinach dip. They offer more than a dozen sandwiches, most of which are made with Boar’s Head meats. The Remus is named after Cincinnati bootlegger George Remus and comes with Genoa salami, prosciutto, mortadella, capicola, provolone and roasted red peppers on ciabatta bread. The Cat’s Meow is one of their multiple vegan sandwiches: faux cream cheese, figs and toasted almonds on open-faced ciabatta. The rest of the expansive menu features appetizers, sides, cocktails and a deli counter in which you can get sandwiches and sides like goetta potato salad to go.

On a recent weeknight visit, the place wasn’t crowded, but service was slow. My friend and I started off with a couple of cocktails. The Imogene ($8) had pink peppercorns floating in a glass that had a gradient of rose color on the bottom, which turned clear near the top. The strawberry-infused Watershed gin drink tasted sweet but overall was light and refreshing. The Fitzgerald ($8) had a citrus and anise flavor from vodka infused with tarragon and kumquat simple syrup and was served in a martini glass. They also offer rotating draft beers — on this night, New Belgium took over their “Giggle Water” taps — and “Jesus Juice,” aka wine by the glass and bottle.

Next, we ordered a couple of appetizers. Our waitress told us the whipped lemon ricotta with crostinis ($8.99) would take 20 minutes to bake, but it was worth the wait. Morsels of lemon zest were mixed into an ample portion of ricotta. In fact, the ricotta tasted better when it cooled. I had a house salad with bourbon-peppercorn ranch; the bourbon flavor was hidden, but the pepper was strongly in the foreground. We also tried guac-stuffed peppadews ($1.50 per order), which acted as a good palate cleanser before we received our sandwiches.

They have three kinds of tuna salad sandwiches, including a vegan tuna ($6.50) with chickpeas, celery, nutritional yeast, onions, lemon juice and kelp granules folded into vegan mayo and set on Sixteen Bricks sourdough bread. As far as vegan sandwiches go, this was one of the best I’ve tasted anywhere. The lemon gave it a tang, and the speckled kelp made it feel healthy.

My friend tried the Sussman Volk ($10.99), named after the man who supposedly invented the pastrami sandwich. The sandwich came piled high with pastrami, caramelized onions and mustard on salted rye batard. Unfortunately, it didn’t come with chips like my sandwich did — or anything else. My friend lamented how all deli sandwiches should come with a pickle spear. I saw Boar’s Head pickles at the deli counter, but for some reason the pickles were absent with the dishes.

Sides are separate, and we tried the buffalo sauce and blue cheese potato salad. It was creamy, with a slight kick from the hot sauce. After eating all of this — and even having leftovers to take home — I managed to save room for dessert, and you should, too. They serve seasonal slices of O Pie O pies and Peace Street Bakery vegan cakes. I opted for the latter’s rainbow cake ($5): six layers of colors ranging from purple to teal, coated in a white icing and a kaleidoscope of colored sprinkles. The cake was dense. While eating it I felt like a happy child.

Grand Central is meant to be a neighborhood restaurant — its tagline is “The Neighborly Place to Nosh” — and since I don’t live in Pleasant Ridge, I’m not sure how often I’d make the trek again. However, the vegan tuna sandwich and rainbow cake might tempt me into returning. I like the idea of a deli that stays open late (until 2 a.m. on weekends) and serves drinks all night. They offer a special every day, whether it’s Wednesday night pasta and half-price bottles of wine or the Big Palooka — a double-decker BLT with a fried egg, usually reserved for Sunday brunch — on Tuesdays and Thursdays. I do, however, wish they would cure some of their meats, make their own pickles in-house and procure cheeses from nearby Share: Cheesebar.

As national delis go, it can’t compete with anything on the coasts or places like Mudgie’s in Detroit or Mitchell Deli in Nashville. Locally, Grand Central is slightly pricier than Carl’s Deli in Hyde Park or Silverglades. But with a dearth of good delis in the ’burbs since Rascals’ NY Deli in Blue Ash closed, Grand Central Delicatessen is what the area needs right now.