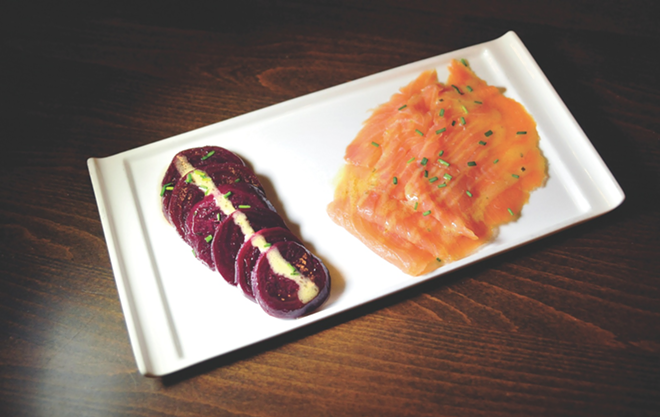 It’s unusual to find a restaurant in the Cincinnati area that’s a permutation of both Italian and Argentine cuisine, but Alfio’s Buon Cibo (Italian for “Good Food”) aims to the wed the two regions together.

Alfio’s namesake is chef Alfio Gulisano, who is of Italian descent and grew up in Buenos Aires. Drawing from his dual heritage, Gulisano dots the menu with Italian (baked ravioli, bruschetta) and Argentine (empanadas, grilled lamb) dishes, but steers more toward the former than the latter. Before embarking on this endeavor, Gulisano cut his local teeth cooking primarily Italian at Bella Luna in the East End. Alfio’s opened in the erstwhile Poco a Poco spot in Hyde Park this fall, and for the most part, the interior remains the same -— bar stools in the front and dining tables in the back; added are bright mustard walls, dark wood furniture and colorful oil paintings of villas nestled on the Mediterranean.

On the night we dined, the restaurant was buzzing with large groups of people and the constant uncorking of wine bottles. To kick off the meal, I ordered a glass of Humberto Canale ($8), an extra brut sparkling wine from Patagonia (you don’t see wines from Patagonia everyday) that was dry initially but then burst with nice notes of pear and apples. The wine list featured wines from the United States, Italy and Argentina with a focus on hit-or-miss Malbecs. The oenophile boyfriend took his chance with a Malbec and felt his glass of a red Malbec Sottano ($9) redeemed the grape’s spotty reputation.

Once drinks were established, we hovered over the appetizer list for a while and finally decided on a gorgonzola cake ($9), a crab wedge salad ($10) and smoked salmon carpaccio ($10). The sweet and savory gorgonzola cake had a flan-like texture: it was creamy, potent and was drizzled with a honey truffle balsamic glaze redolent of one of those cheese plates accompanied with nuts and jam; it was pretty much the best thing we tasted. Our wedge salad was crowned with small bits of crab meat mixed in with a Thousand Island-esque shaded spicy basil dressing. Because of the skimpy bits of crab meat, the salad really should’ve been called a wedge salad with crab, not a crab wedge salad. Our last appetizer, the salmon, had chives sprinkled on top of the fish and came with a side of poached beets, which seemed superfluous since it didn’t enhance the salmon in any way, unless beets and salmon is some sort of Argentine delicacy I’m unaware of.

With Italy and Argentina located on coasts, there’s always going to be access to fresh seafood and Alfio’s certainly highlights that. For our entrees, I tried the lobster parmigiana ($25), a dish I’d never seen on a menu before tonight. Melted cheese covered a large slab of breaded lobster tail that was planted on top of a bed of spaghetti and marinara sauce. Alfio’s makes a lot of pasta in-house, but it was obvious they used store-bought spaghetti for this dish, which brought an otherwise interesting entree down a notch. The boyfriend’s medium-rare grilled lamb chops ($25) were slightly fatty and came piled on top of butternut squash mashed potatoes. (It wasn’t clear if the squash was mixed in with potatoes or just resembled mashed potatoes, but they tasted better than I thought they would.)

Dessert was almost not an option until our waiter mentioned three magical words: “housemade gelato trio.” Our trio came with the best kinds of gelato possible: salted caramel with chocolate chips; Andes mint chocolate chip; and Nutella and banana gelato on an Oreo cookie. It was all delectable, especially the salted caramel.

There are many mid-range dining options in the city, but Alfio’s wouldn’t rank on top of my list of splurges, even though I thought most of their dishes were fairly good. If they want a fusion sort of restaurant, they need to import more Argentine dishes to balance out all of the Italian. Despite some minor and fixable flaws, Alfio’s Buon Cibo is a good start; it just needs to find its footing and decide what it wants to be: Argentine, Italian or a union of both.