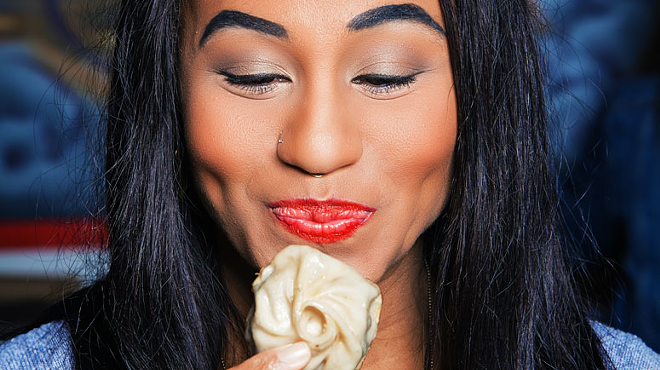 Photo: Lisa VonLuehrte, LiVon Photography
Businesses typically shutter because they don’t have enough customers, not the reverse. But Tiger Dumpling is different.

Tiger Dumpling opened on Calhoun Street in Clifton in January 2015 and developed a cult following — the restaurant sold more than 3,000 handmade dumplings a day. It got so popular that owner Hunter Hebert made the decision to close the business on April 28, 2016 — a mere 14 months later.

“I didn’t really tell anybody why, but it’s because I knew I was going to move to a larger facility,” he says. “I couldn’t continue to do the volume in that small of a space.”

The larger facility is a 1,500-square-foot storefront and eatery at The Banks, previously occupied by WG Kitchen, a big step up from the 525-square-foot Clifton shop. Hebert also purchased a production plant in Woodlawn to mass-manufacture dumplings for the Banks location and for an even larger project that he’s been fairly secretive about.

“Everyone pretty much thought I was crazy to close the restaurant in Clifton, but there’s a bigger master plan that very few people know about,” he says.

Rumors have swirled he made a distribution deal with Kroger, and his response was, “No comment.” But a press release issued by the restaurant on Monday confirmed that Tiger Dumpling will be opening a food cart in Kroger’s Oakley Marketplace by the end of October, with an additional location coming to the Harper’s Point Kroger soon after. (Update: As of Thursday, Kroger has announced they have ended the relationship with Tiger Dumpling, less than a week after the partnership announcement. No reason was given.)

In Clifton, Tiger Dumpling offered three kinds of steamed dumplings — chicken, pork and veggie — with sauces. They also offered edamame and soup. That was it. The University of Cincinnati crowd especially gravitated toward the dumplings because they could either pick them up or have them delivered until 3 a.m.

The move into large-scale manufacturing can sometimes mean the demise of a once solid product, because quality can suffer when you increase quantity. At the Woodlawn plant, the dumpling output will be 15 to 20 times what it was in Clifton. But Hebert assures the greatest difference will be how quickly and efficiently the dumplings are produced.

“We did a lot of testing to make sure that our final product — as far as taste, texture, feel — was identical to where we were before with a 100 percent handmade product,” he says. “The only thing in our process that’s changed is the actual closing of the dumpling. Instead of having to do it by hand, now it’s a machine that closes it.”

If the dumpling supply runs low at the Banks storefront, all they have to do is jog up to Woodlawn and grab more.

The vegetarian dumplings will be processed in a separate area, making them a 100-percent vegan product, and the restaurant will continue to use fresh ingredients, nothing frozen.

The business’ so-called “catastrophic growth” astonishes Hebert, who moved to Cincinnati from Detroit two years ago to be with a girlfriend. The relationship didn’t last long, but his dumpling empire has soared. To assuage doing all the work himself, Hebert hired Dallas native Thomas Knier to be the director of operations.

Hebert and Knier had mutual friends and met for the first time at Jeff Ruby’s.

“And I turn around and I see this gentleman walking toward me in a T-shirt, flip flops, cargo shorts and a hat, and I snidely said to my friend, ‘Oh, they just let anybody in here now,’ ” Knier says. “Little did I know, 10 seconds later, this is Hunter, who I would be meeting and eventually one day be an executive on his staff.”

The two bonded and Hebert hired him.

Together, they are working on transforming Tiger Dumpling into a brand, replete with franchising potential in college towns.

The menu will expand to include soup all day — in Clifton soup was only offered part of the day — plus a steamed bun and possibly ramen. And now, with the extra space, they’ll be able to install a fryer. “We would like to see a fried dumpling,” Knier says.

Hebert was worried that closing the shop would result in losing fans, but he says the groundswell has doubled their Instagram followers and quadrupled Facebook fans.

Before Hebert landed in Cincinnati, he spent time traveling and living in exotic locations, like South Africa. “I was blessed to be born into family that gave me an opportunity to do a lot of really neat things at a young age and I think that molded me as far as being able to look at different cultures and different cuisines,” he says.

Hebert and Knier both see Tiger Dumpling as a means to be charitable in possibly setting up culinary scholarship funds.

“He’s always wanting to give it away to someone,” Knier says of Hebert. “That’s a good mindset to have.”

Knier would like it to be “more than a dumpling restaurant,” and says it would be nice to be able to work one job for the rest of his life.

Hebert agrees. “I want to see the company that I put all my blood, sweat and tears into be successful enough to give the quality of life to my employees that I would be OK with,” he says. “I just want to see the brand go where a quality brand should go. Knowing that it’s got the capacity to do that now is fun to think about, but it’s also very scary, because it’s happening so fast.”