Have Your Cake and Drink It, Too at Braxton Brewing Co.'s Fifth-Annual Dark Charge Day 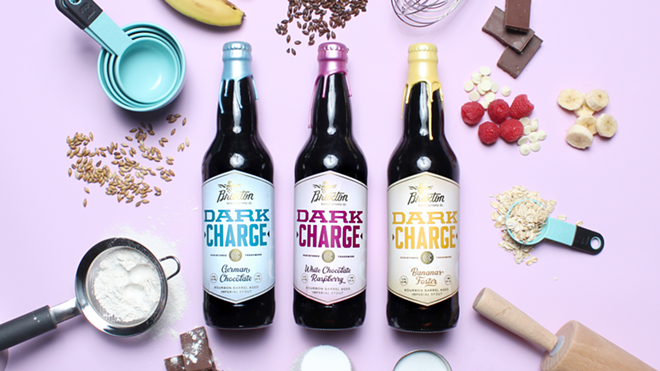 Braxton Brewing Co.'s fifth-annual celebration of bourbon-barrel-aged stouts is back on Dec. 7 for Dark Charge Day.

For 2019, the brewery is releasing multiple barrel-aged Dark Charge variants coinciding with a winter block party featuring live music, food and limited beer bottle sales. Braxton says the beers "have been derived from classic Braxton experimentation, some tried-and-true favorites and some that push the boundaries of the craft beer industry."

This year's releases are the classic Bourbon Barrel-Aged Dark Charge, a Dark Charge Maple Breakfast, Dark Charge Mole and Dark Charge Luxardo Cherries & Citrus. In addition to those options, Braxton will also be releasing a special "Cakebox" of beers.

“Dark Charge Day is yet another way we’re able to celebrate Kentucky’s rich bourbon culture with craft beer drinkers,” Jake Rouse, co-founder and CEO of Braxton Brewing Co., says in a release. "This year’s event will once again push the boundaries of not only the craft beer industry, but will also challenge how the community thinks of Braxton. It’s our mission to bring one-of-a kind experiences to everyone who encounters the brewery, whether tasting our craft beer for the first time or immersing themselves in an event as booming as Dark Charge Day."

The block party will feature live music acts including DJ JK, the Hot Magnolias, Young Heirlooms and Arlo McKinley on the main stage with Tracy Walker, Brother Smith and Jess Lamb on the acoustic rooftop stage. In addition to music, there will also be a slew of specialty dishes from the likes of Coppin's, Parlor on Seventh, Rich's Proper Food & Drink, City Goat Flipdaddy's and The Gruff.