Our interns hit up the new Over-the-Rhine bakery, which offers up delicious bread and sandwiches on the go.

A blue, smiling sloth is depicted on the door of the unassuming Allez Bakery at 1208 Main St. in OTR. Inside the small space, the smell of fresh bread swells, ranging from parmesan black pepper to sourdough and baguettes.

Donning a white apron and blue baseball hat covered in flour, Tom McKenna explains that he opened Allez on March 9 and operates the bakery with only two other employees, making it a small, craft operation.

“I am still learning everyday,” he says as he wraps artisan sandwiches in a brown paper bag.

McKenna studied at New England Culinary Institute in Vermont and then worked at several restaurants and baked bread around Cincinnati, including at Slims in Northside and Dutch’s in Hyde Park, the latter of which gave him creative freedom. 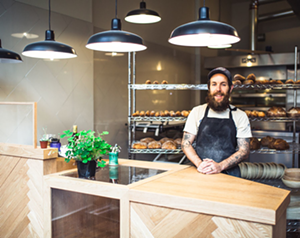 McKenna’s wife pushed him to open Allez and he looks forward to expansion in both the food he serves and the literal space the bakery occupies. The front counter currently displays local Hen of the Woods kettle chips and La Croix sparkling water, but was designed to display a range of pastries and bread. Breakfast is next on McKenna’s list, which will include scones, biscuits and more.

Since the space has no seating, he also hopes to eventually expand the area to include a sitting room or café. For now, as the name suggests, it’s for those on the go: “Allez” is a French phrase used to shout encouragement or cheer, and McKenna hopes to see that kind of excitement as his small business grows.

We sent our interns to try out a few of their sandwiches before taking a stroll around OTR. Here’s their verdict.

Bread: In short, I have a love affair with it in all its crackling wonder. Upon strolling into Allez, the words of Ramona Flowers (of Scott Pilgrim vs. The World fame) came to me: “Bread makes you fat,” she says, her sarcasm echoing in my head. “I don’t care,” whispered my inner monologue.

Allez’s affinity for bread is evident. A small dish of free samples sat by the register, loaves of every beautiful shape and color could be seen and smelled in the back. As far as my lunch experience, it’s not often that a vegetarian sandwich is packed with creativity and flavor. Slipped between slices of ciabatta bread was marinated beets, asparagus, French feta, arugula and fava hummus. The beets, in particular, made the sandwich unique compared to other vegetarian options in the area. For someone on the go, the service was fast and the food was fresh. With each bite there came a new ratio of contents, mingling to create a meal that didn’t feel overloaded or try-hard. It was simple, un-gimmicky and quite good.

What else would you want to order? The same sandwich. #vegetarianlyfe. But really, I’d go for the bread alone. I also want to try their breakfast options when they’re able to expand. Scones are just like heaven. Probably what The Cure was singing about, honestly. 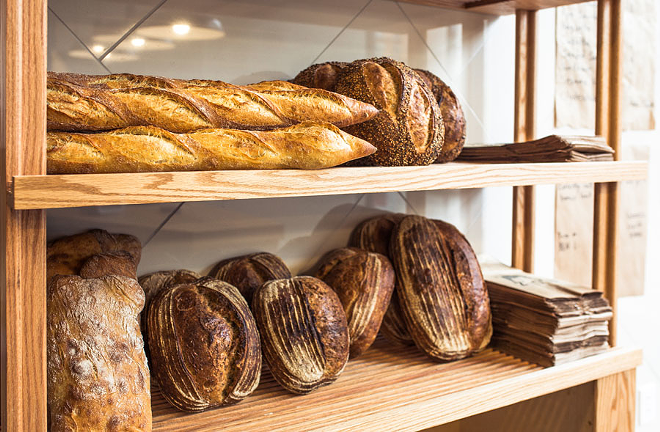 The second I walked into Allez, I was overwhelmed by the warm smell of fresh bread. I truly felt that I was in a small, European bakery. My artisan sandwich was prosciutto (Italian dry-cured ham), rapini pesto, and authentic fontina cheese all on a ciabatta bun. It’s a heavy sandwich with an earthy taste that can only be soaked up by the side of pickled carrot. I was apprehensive about exploring the world outside of pickled cucumbers, and I probably wouldn’t do it again. The prosciutto is thinly sliced, but there are generous helpings. It was absolutely delicious, but incredibly filling. As for drinks, I hope you like La Croix, because that is the only drink they are serving until the get more space. Overall, Allez has a clean, friendly atmosphere, but it is still expanding. For now, there is no place to sit and eat. Luckily Over-the-Rhine has plenty of spots for a sunny snack break.

What else would you want to order? I definitely had my eye on the chicken salad sandwich. It is my usual café go-to and I’m excited to taste Allez’s European twist on it!

I was ready to dig into this sandwich the moment I saw it. I didn’t even think to take a photo until I was halfway through, which is a shame because you know anything with beets is going to be Insta-worthy. Featuring marinated beets, fava bean hummus, French feta, arugula and asparagus, this sandwich is chock full of fixings. It’s not often you find a veggie sandwich whose contents threaten to fall out with each bite, and that makes for a delicious and filling lunch. The focal point was the bread. No ingredient was able to outshine it. Allez is a bakery after all. Each ingredient enhanced the fresh and crunchy ciabatta. Beet juice stained the soft center a gorgeous bright pink, soaking it in additional flavor. Feta added a much-needed tang to the otherwise earthy taste. The lack of seating was a surprise, but not a problem. We headed to a bar across the street. The manager was happy to play host. Overall, Allez seems like a nice spot for OTR natives and workers. You’ll be in and out with a tasty sandwich in minutes.

What else would you want to order? I would go back for the fresh bread served all day. I’m the kind of person who would eat bread for breakfast, lunch and dinner. I’d go for the parmesan black pepper, baguette or ciabatta.

Chicken salad with tarragon, fennel and arugula stuffed between two slices of house-baked Ciabatta bread, paired with a complimentary La Croix sparkling water and pickled carrot was just the lunch I needed to fill me up on a hot June afternoon. But without in-house seating, I had to take refuge at a bar across the street before I could chow down. The chicken salad wasn’t special, but it wasn’t bad either. The fennel and arugula were fresh and crunchy, though, giving the sandwich a fresh, summer taste. The leafy greens were delicious, but the best part was definitely the ciabatta. Soft yet chewy at the same time, the ciabatta is evidence that McKenna has definitely picked up a few tricks baking bread here and there over the years.

What else would you want to order?  I’m excited to go back and try his popular parmesan black pepper bread. Allez Bakery is just starting out, so give them more time to settle in and they’ll quickly become a local favorite.