Talkin' about waffle irons and building his Taste of Belgium empire 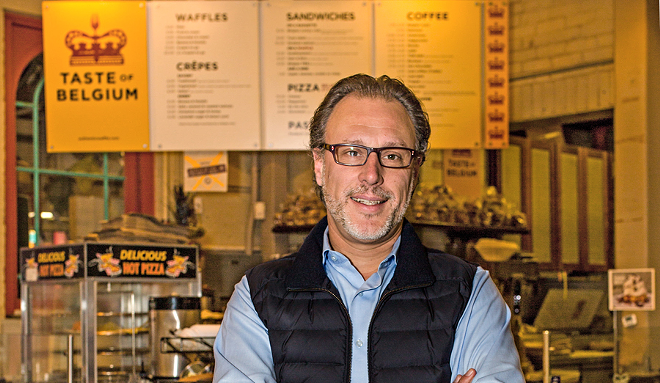 If you follow local restaurant lore, you’re probably familiar with the tale of the tall, lanky Belgian dude who showed up one day at Findlay Market, waffle iron in hand, and proceeded to set the town on fire with his hometown cuisine, becoming an integral part of our region’s business community.

The story is mostly true, so we recently sat down for lunch at Clifton’s Maki Express Ramen House with Jean-François Flechet — the aforementioned dude and the mind behind Taste of Belgium — and found out that what might seem like an overnight success story was in reality a business plan gone awry.

CityBeat: As the legend goes, you arrived in Cincinnati with one waffle iron and started your empire. True?

Jean-François Flechet: I arrived long before waffles. I arrived in March 2000 to work for a market research company. …I stuck around and after I got my green card, I thought of doing something different. I invented a hot-food vending machine with a friend of mine, spent a few years on that and then we had some hiccup with investors. Then I started making waffles to try to pay the bills in between until I found another group of investors. Then the waffles really took off.

CB: And you started with one waffle iron at Findlay Market?

JF: Yes, one waffle iron at Findlay Market. Well, actually, that’s not true. The very first time I baked waffles was at the Coachella music festival in California in 2007 and it was an absolute disaster, so when I came back I thought, “Let’s do this on a little bit smaller scale.” And so I started in the back of Madison’s Produce.

JF: Where I grew up, food, you just sit at a table and you eat your food with fork and knife. There were no McDonald’s, no fast food — the only fast food was like the waffle. If you go to Brussels, there are toppings on it. But where I grew up, it’s just something they served in a piece of wax paper and it’s good on its own. It’s really simple and it’s easy to produce and I just thought, “That’s something I can give it a shot.”

CB: Taste of Belgium has grown into a family of many very different restaurants, each with a very different feel. What was your thought process behind the planning of the locations?

JF: For OTR, when we opened it, we had so little capital that we opened it totally bare boned. We kept the existing HVAC, the floor, the ceiling; we put the cheapest possible hood at the back. We didn’t have a prep kitchen — we were stacking boxes of potatoes and putting cutting boards on top of it. We did the big remodel last year. Being in a historic structure we wanted to keep the building as intact as possible, so that’s why the tin ceiling is still there, the original floor is still there, all the exposed brick, we kept as much as we possibly could.

When we opened Clifton, we were in a brand new location. We had the students and it was a lot bigger and we wanted a focus on the bar and a lot of TVs cause we figured it was gonna have kind of a sports bar feeling. With Rookwood we switched the team of architects. We were able to draw a more modern (place) — something that would be in the line of how I wanted the place to look moving forward. From Rookwood on, it’s more of a grown-up Taste of Belgium.

CB: Tell me about your latest restaurant, Taste of Belgium at The Banks.

JF: The Banks is kind of the shiny jewel. The one thing I wanted to have at The Banks is the best-rated beer list in the city. We have 54 beers on draft, we have over 100 in bottles and we have beers that you will not find anywhere else. Local beers are great, but I don’t care if people are drinking beer simply because it’s local. For us, the way we look at it, ask us what’s good. It could be local, it could be Belgian, it could come from a small brewery in Switzerland that makes only Belgian sour — Brasserie Trois Dames, we almost always have some of their stuff on draft.

CB: Could you ever have imagined that our traditionally German city would embrace Belgian cuisine so wholeheartedly?

JF: I had no idea. My plan was never to get into the restaurant business, so I failed miserably.