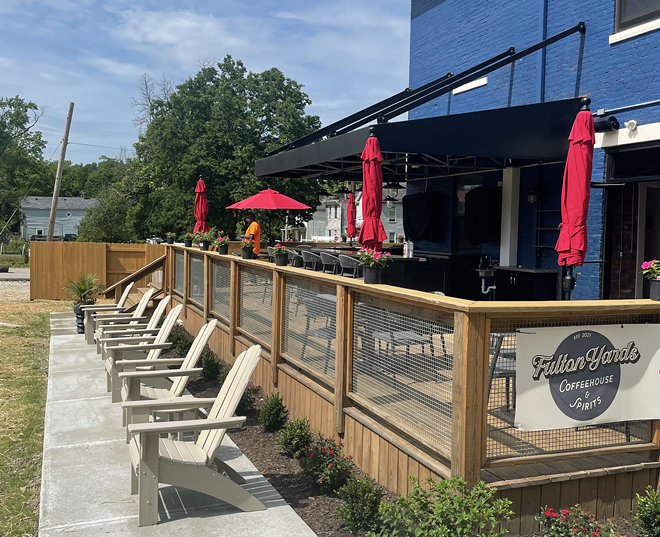 The East End has a new coffee shop and craft cocktail bar that is hosting its grand opening this weekend.

Fulton Yards officially opened June 10 and has had a soft opening for the past five weeks. Co-owner Greg Dorr told CityBeat in an email that their goal of not making a large announcement of their opening was to begin “introducing ourselves to our neighbors and the community, getting our team established, building out our operating procedures and finalizing the punch list from our build-out.”

Now that they’re ready Dorr says they plan to host a grand opening party July 30 and 31 where guests will get to experience the “artisanal coffee shop wrapped by an outdoor craft cocktail bar.”

Fulton Yards is located in the East End, which inspired its name, as Dorr says it is an homage to the neighborhood’s original name —Fulton— and the lumber yards that were all over the area.

The spot was opened by two couples — Greg and Katie Dorr and Gregg and Linda Berry— who had long wanted to start a business together and they seem to be supported by their community. Dorr said that over 35 community members wrote letters to the zoning board in support of Fulton Yard; he says most are now regulars.

“It’s been a long journey to open - we signed the lease in December 2020 - and had many challenges creating a new brand from scratch, during a pandemic and in a flood plain! But it has all been worth it and we are so excited to have opened a living room for the East End where people can come together and feel at home,” said Dorr.

Well before opening their doors, Dorr and his partners decided to partner with local small batch roaster Urbana Café which has a few locations around the city. The Fulton Yards menu features many ways to get your caffeine intake for the day including cold brew, ice lattes, tea, matcha and more. There is also a rotating selection of pastries local Baudry French Pastries.

Come back in the evening for a hand-pick wine list and cocktail which Dorr says are “custom made from original recipes and named to reflect the history of the neighborhood,” plus some coffee-infuse cocktails featuring a signature espresso martini.

The most popular cocktail on the menu now is the Eastern Liberty which Dorr describes as a “bourbon, honey, ginger and lemon concoction.”

You can also grab something to eat; right now they have small plates like chicken salad from downtown’s Silverglade Deli plus cheese and charcuterie boards.

Stop in for a series of grand opening events this weekend to celebrate Fulton Yards being fully open.

July 30 will start out with informative demonstrations by head roaster and director of coffee at Urbana Café Ross Hooley from 10-10:30 a.m. then from 3-3:30 p.m. stop by for a wine tasting. 5-5:30 p.m. mixologists from Fulton Yards and Robin Carnes from Northern Row will both create a concoction, and those in attendance will vote for their favorite; the top voted gets a spot on the Fall Specialty Spirits menu. From 6-10 p.m. the attendees can enjoy a DJ plus drink and food specials.

Ross Hooley will be back at the same time on July 31 for the same presentation and another wine tasting will be held from 3-3:30 p.m. followed by a beer tasting led by Katie Pappa from Madtree Brewing. Finally from 6-9 p.m. there will be live music from singer Johnny Delagrange.