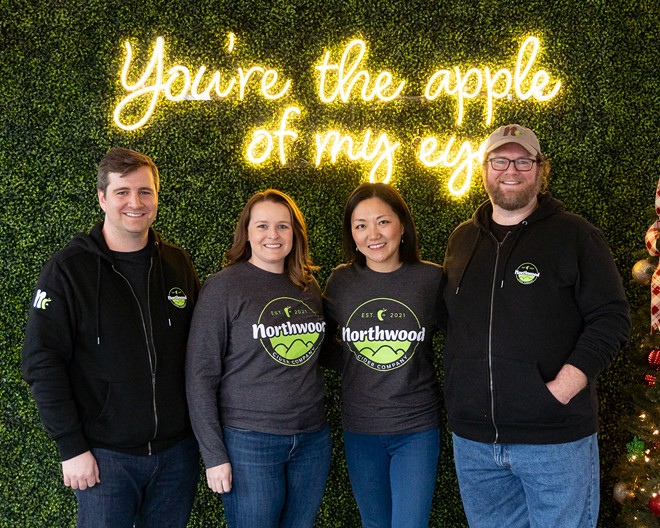 The Cincinnati area’s first brewery and taproom dedicated only to hard ciders opened in Norwood in November. Northwood Cider Company is the brainchild of a former brewery owner and a real estate finance and development professional who bonded over their shared passion for community development and hard ciders.

Co-owner Darrin Wilson was first exposed to hard ciders while living in England, where the drink is a bit more popular. Wilson previously headed up Dreaming Creek Brewery in Richmond, Kentucky and met Northwood Cider Company co-owner Joe Klare – who works for a non-profit community development fund that supports urban revitalization projects in Northern Kentucky – after selling the business and moving to Cincinnati. Along with their spouses, Rohan Krehbiel and Keyu Yan, they worked for several years to bring Northwood Cider Company to life.

“We looked for over two years to find a location because we wanted not just the right building, but we wanted a community as well. We wanted to find a place that we could really be engaged in the community and build partnerships and provide that place where people can come together,“ Klare tells CityBeat.

A student of Wilson’s suggested Norwood – he’s also a college professor at NKU who counts community development among the subjects he teaches.

“We did a walking tour of Norwood, and we just love the passion of the people here,” Wilson says. “They’re really forward thinking and trying to build something here in this community with a lot of community engagement, and we wanted to be a part of it.”

The lack of a dedicated cidery in town provided an opportunity for Wilson and Klare to create a Cincinnati original, they say.

“We want to be Cincinnati’s hard cider. We didn’t come here to start this business; we started this business because we’re passionate about it and we felt the region needed it,” Klare says.

Those who think the term “hard cider” means cloyingly sweet bottled ciders found wherever beer is sold may be in for a surprise at Northwood.

“Most people have a misconception about cider that it’s on the sweeter side like an Angry Orchard or Magners Irish Cider, that sort of thing. But honestly most ciders are actually dry – closer to like a white wine product,” Wilson tells CityBeat. “We tend to focus on the drier side of things even though we do make some sweet ciders as well.”

But Northwood’s ciders aren’t limited to only dry or sweet varieties.

“We just love experimentation,” Wilson says. “With our head cider maker Candace [Winterbauer], we play with whatever flavors we can find.”

When Wilson says “flavors,” he doesn’t mean artificial. Northwood combines fruits, herbs and other natural ingredients for their creations.

“All of our juice is fresh-pressed, never from concentrate. We don’t add any concentrated stuff into our product. We want the fruits to naturally come out and the botanicals and so forth,” Wilson says.

The production process for hard apple cider is more akin to winemaking than beer brewing, many people may be surprised to learn.

“Cider is a little bit of a different production cycle. We’re actually technically a winery because we’re dealing with fruit juice rather than cooking grain. We don’t have a cooking process in our production cycle,” Klare says.

The brewing area is relatively small, and shares a roof with the taproom. Visitors can only enter the brewing area during tours, but the area is visible to customers from their tables.

“By having it open and visible to patrons, it’s an opportunity to start to learn about the process and how we are a little different than beer,” Klare says.

Beer drinkers might like Northwood’s dry-hopped cider called Highlands, which gets a post-fermentation flavor infusion from citrus hops. The standard dry and semi-dry options are popular in the taproom, as well.

Another popular, compelling option is a dry cider that was the result of an experiment expected to yield a sweeter berry-flavored drink. After a dry base cider was finished fermenting, the brewers added cherries and raspberries for flavor. Unexpectedly, the sugars provided by the berries became food for the residual yeast in the cider and rapidly fermented. Named the HLA, or Happy Little Accident, the dry cider with just a hint of the originally planned berry flavors was born.

“It was one of those things,” Wilson says. “It was supposed to be a sweet cider, but it ended up being a dry cider and people have absolutely loved it.”

Keen-eyed local history buffs will notice Northwood’s nods in its branding to the Norwood of yesteryear. The name Northwood itself comes from the former name of the city, North Wood Heights, which eventually was shortened to Norwood. Northwood’s 1903 dry cider references the year Norwood was incorporated as a city, and the name for the Highlands dry-hopped cider comes from the city’s motto, “The Gem of the Highlands,” Wilson says. Sarah’s Semi-Sweet is named after Sarah Bolles, who gave the city of Norwood its name.

In addition to the main cider options, the taproom offers rotating seasonal and experimental ciders as well as three guest taps pouring local beers. Every Thursday, Northwood releases a small five-gallon batch of an experimental cider that are available until they run out. The HLA was originally a Thursday special that ended up making the permanent tap list, Wilson says.

“[The experimentation] kind of gives people the option to see what cider can actually be beyond the more corporate national brands,” Wilson says.

The local love continues in Northwood’s limited selection of snacks, sourced from Greater Cincinnati small businesses like Hen of the Woods potato chips, popcorn from Mama Made It at Findlay Market, hot pretzels from Tuba Baking Co. in Dayton, Kentucky and cheese from Urban Stead in Evanston. Patrons are welcome to bring food in or have food delivered. Non-alcoholic drinks are available, including not-from-concentrate apple juice and apple soda, kombucha from Skinny Pig and Mexican CocaCola.

Klare says that breaking the mold and defying people’s expectations about cider fits right in with Northwood’s goal of community building.

“We’re trying to create products that people want to discuss and talk about,” Klare says. “Looking at the product in ways that people haven’t in the past is really a big push for us, just to get people talking to each other.” 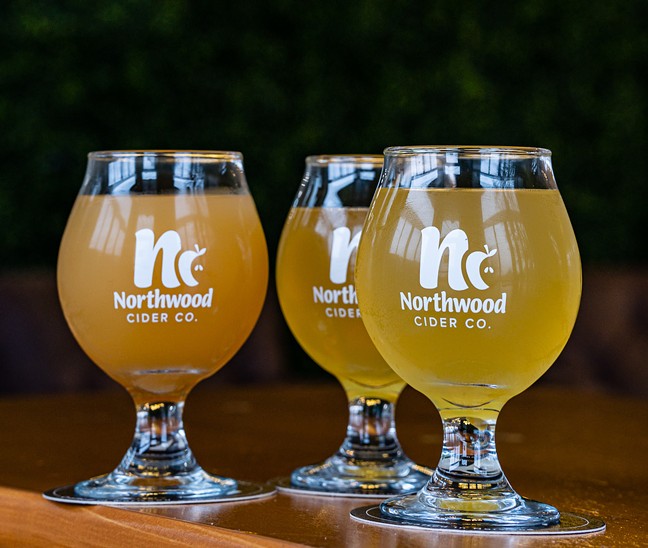 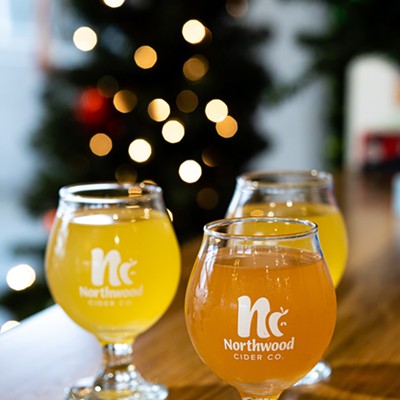 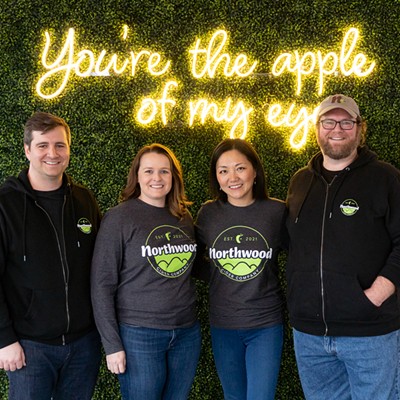 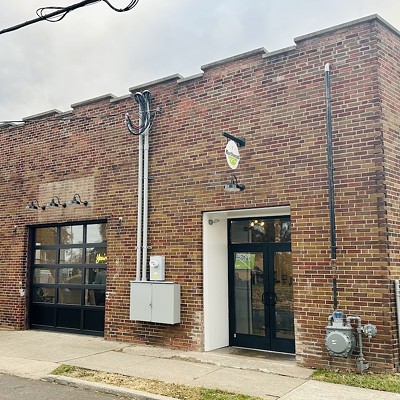 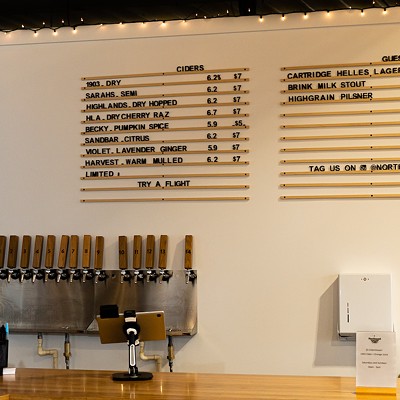 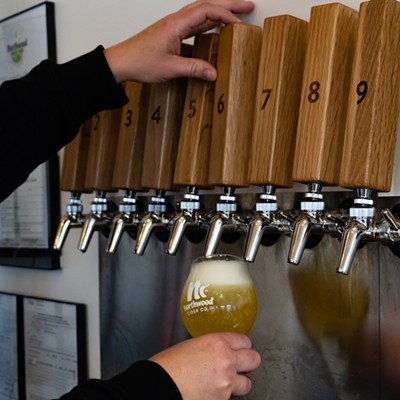 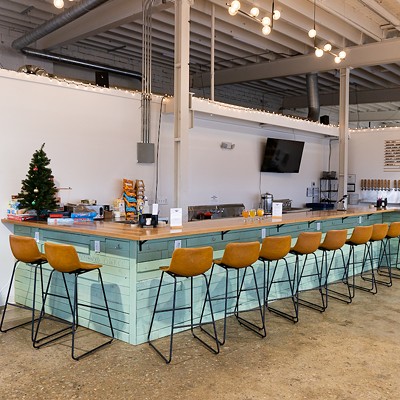