The Over-the-Rhine standout has expanded into the former Senate space next door. 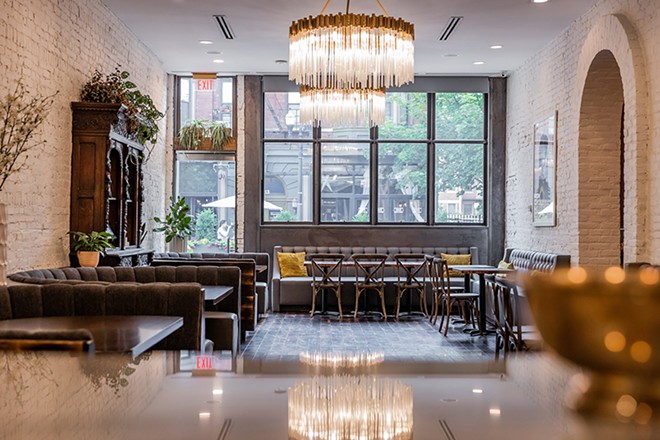 I don’t need an excuse to eat at Abigail Street, inarguably one of Cincinnati’s most reliably excellent restaurants. Go there with a few people, order and share two or three items per person, and you’re all but guaranteed to have a memorable feast of a meal.

But I’m happy to have a reason not only to dine there but also to help spread the news about some welcome additions to this 11-year-old standout in Over-the-Rhine.

In October, owners Dan and Lana Wright closed their adjacent restaurant, Senate, and said they planned to expand Abigail into the space. Ten months later, that project is near completion.

The new dining room, now open to the public, has a noticeably different décor and vibe from the one I’ve known and loved for all these years. The seating is more widely spaced, there are more banquettes and booths than tables, and the room consequently doesn’t get so loud that you have to shout to converse with your dining companions. The often-oppressive noise level in the main dining area previously was a downside – although not enough of one to keep me away – but the option of having both a wonderful meal and less cacophonous social interaction makes the new addition quite attractive.

As with so many construction projects these days, transforming what was Senate into an enlarged version of Abigail took longer than expected. Dan Wright said that one of the most time-consuming facets of the project was to duplicate the finish on the flooring to create a smooth transition between the two dining rooms. His team also tore out the Senate bar to make room for more table seating.

Wright said the expansion has doubled the restaurant’s capacity, adding 50 seats. That includes three large eight-person booths and two banquet tables that also can serve eight per table; nothing like that was possible in the original dining room. Outdoor tables on Vine Street add another few dozen seats, and Wright has managed to find enough staff to serve at capacity.

The restaurant now uses the reservation service Resy, a welcome move. For years, Abigail Street didn’t take reservations, and the walk-in waits could be prohibitive. Wright said with that convenience and the added capacity, the restaurant now “is doing better than ever.”

When the expansion opened earlier this summer, the Wrights also made a couple of personnel changes, most notably elevating sous chef Joe Bedel to the position of executive chef. Bedel is no newbie to the operation—he was sous chef for a half-dozen years—and many of the flavor combinations that make dining at Abigail Street so memorable can be traced to his creative influence. Former executive chef Yousef Shtiewi—who also should be thanked for the great food coming out of this kitchen—has been promoted to culinary director for Queen City Hospitality Group, the umbrella company for all the restaurant and bar concepts in the Wrights’ growing empire.

With the expanded capacity at Abigail comes a few new menu items, but longtime favorites aren’t going away. Some of the additions are seasonal, such as the spectacular peach and tomato salad. Since the menu helpfully lists all ingredients for each dish, I tried to reproduce that salad at home the next night and did a halfway decent job of it, but the restaurant’s is a cut above – I didn’t have burrata cheese or berbere croutons, and I used nectarines instead of peaches.

Equally refreshing and flat-out yummy is fattoush, a cold salad that’s been a mainstay here since perhaps day one. One of my companions said he always orders it, and yet I never had tried what sounded rather dull. How good could yellow peppers, radish, tomato and cucumber be? Way better than it sounds, it turns out, thanks to a lemony dressing and crunch provided by bits of toasted pita bread. Fattoush now goes to the top of my must-have list for return visits.

We ended up trying eight dishes shared among the four of us. Other hits included lamb spaghetti, a relatively recent addition that Wright said could become permanent, given its popularity. As with much of the cuisine at Abigail Street, the preparation is uncomplicated, letting the high-quality ingredients shine. The pasta, cooked perfectly al-dente, is robed in a sauce of crispy lamb shoulder, parmesan cheese and kale.

Merguez stuffed dates didn’t please everyone at our table, but I enjoyed this savory preparation that took almost all the sweetness out of the dates. They are stuffed with lamb sausage (merguez), wrapped with bacon and sauced with tomato and saffron. Sweet dates have their place, but this savory version was a revelation.

I’m not sure how it happened, but we didn’t get around to ordering two of my favorite dishes—wood grilled octopus and potato gnocchi. Wright assured me that while the chef might tweak the preparations, these two items won’t be taken off the menu. We did enjoy the daily hummus preparation, one of the newer offerings that starts with house-made hummus and builds the plate with either meat, fish, or vegetables, according to “what the farmers bring in,” Wright said.

Wright is still waiting for completion of a second kitchen in the rear of the former Senate space, which needs approval from the city. It will include a wood-fired oven and generally give the staff more space to produce such remarkably tasty food. Sunday brunch also is on the horizon, maybe before the end of the year.

While we wait for that, it’s easier than ever to nab a table at the Wrights’ stellar standout.