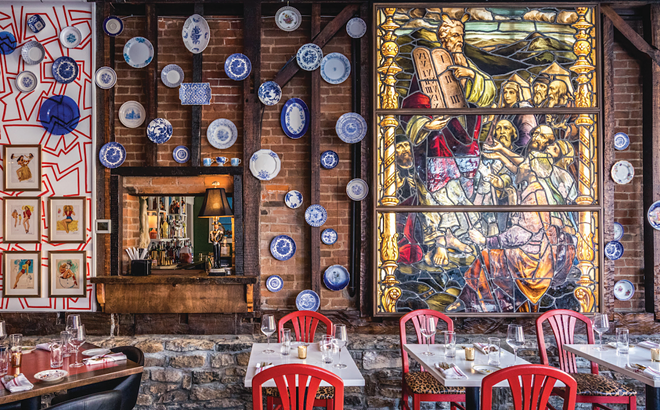 photo: Catie Viox for Zest Cincy
Mama's on Main has a large stained-glass window salvaged from a MainStrasse church that had been destroyed by fire in the 1980s.
Covington’s Main Street — the heart of historically designated MainStrasse Village — boasts one of the best assortments of restaurants in Greater Cincinnati. A lion’s share of credit for that abundance goes to a restaurant group informally known as Otto’s Restaurant Family. MainStrasse residents Emily Wolff and Paul Weckman opened Otto’s in 2003, bringing sophisticated versions of Southern favorites such as shrimp and grits and fried green tomatoes to the riverfront city. That was their only restaurant for more than 10 years, but since 2015 Wolff and Weckman have added popular Mexican eatery Frida and two casual spots at opposite ends of the commercial strip of Main Street: The Standard and Larry’s.

And now the duo has Mama’s on Main, bringing traditional, pasta-oriented Italian fare to the neighborhood. If the difficulty we had getting a weekend reservation is any indicator, Mama’s looks like a gold-plated hit right off the bat.

Wolff and Weckman clearly have a deep commitment to this part of Covington. Their personal journey started in 2002 when they purchased the building at 521 Main St., where they lived upstairs from the newly-opened Otto’s. Wolff says that “the Village” — as residents refer to MainStrasse — had been mostly a bar destination back then. But they saw greater potential.

“We wanted to make this community shine as bright as possible,” Wolff tells CityBeat.

Otto’s became an anchor for the street’s other businesses, and that success helped make the couple’s further investments possible. They opened Mama’s on March 4 after renovating the space formerly occupied by Commonwealth Bistro. Wolff says she and her husband relish doing restoration and design work.

“We have a love affair with historic buildings and love the process of bringing them back to life,” she says. “I did all of the design and artwork at Mama’s, and I have to say it’s my favorite to date.”

In putting Mama’s together, Wolff focused on the color red as a recurring motif, having decided that “Mama wears red lipstick.” Red barstools and other prominent splashes of scarlet enliven the two main rooms and adjacent spaces. The restaurant’s most prominent design element is a large stained-glass window salvaged from a MainStrasse church that had been destroyed by fire in the 1980s. This “serendipitous” discovery became the centerpiece of the restaurant’s main dining room.

“I was bringing a part of MainStrasse history back to the Village,” Wolff says.

Entering Mama’s, guests step into a cozy, softly lit front room facing a bar with those bright red stools and a couple of high-top tables. There’s a glowing faux fireplace with framed, old-timey family photos on its small mantelpiece. Lively conversation from the adjacent dining room greets you, along with a host checking your reservation.

Promptly seated, we were taken aback by the noise level, which took some getting used to. Thankfully, trying to hear each other over the cacophony turned out to be the only flaw in our evening, because the food, drink and service were all good. As we got settled, I checked out the transformation of the space, comparing it to my memories of Commonwealth Bistro. Our table didn’t have a view of the stained-glass window, but we appreciated the three large, round paintings on the wall opposite our seats.

Wolff says the paintings honor her grandmothers, with pieces of family china and other personal elements worked into the design.

The facing wall contains a dozen or more vintage depictions of pin-up girls, neatly framed. The overall effect is harmonious thanks in part to a consistent red, white and blue color scheme.

Mama’s folded paper menu is unpretentious, displaying a handful of offerings under each heading: Appetizers & Salads, Pastas and Entrees. The goal is to provide the neighborhood with traditional red-sauce Italian fare, starting with basic spaghetti and meatballs ($19). Simpler dishes include popular standards such as cacio e pepe ($16), rigatoni with vodka sauce ($19) and risotto made with artichokes and lemon ($18).

Other intriguing pasta preparations include ricotta gnocchi tossed in herb pesto and tomato-hazelnut vinaigrette, garnished with salty, crispy prosciutto ($21); a tagliarini with a hearty mushroom ragu ($19); and, my favorite, agnolotti with pine nuts, lemon, ricotta and garlic breadcrumbs ($21).

The petite stuffed pasta shapes, which are similar to ravioli, hit all the right notes. The dish’s sauce was buttery but not overly greasy, with the lemon cutting through the richness of the cheese and pine nuts and the breadcrumbs adding that hint of crunchiness that I love in almost any savory dish. The portion was relatively small — our server had told us it was the lightest of the pasta dishes — but just right for my appetite.

If you’d like some protein with or instead of pasta, try pork milanese ($25), salmon piccata ($25) or chicken parmesan ($19). Those going meat-free can enjoy eggplant parmesan ($17). We sampled the chicken, a thin- pounded, tender cutlet with crispy breading atop red-sauced spaghetti. The dish was satisfying, though nothing special. If you’re looking for something special, go with the tagliarini or the agnolotti.

We shared two quite delicious appetizers among the three of us: snap pea salad ($11) and fried calamari ($13). The salad featured crispy yet tender peas, thin slices of radish and bits of pickled shallot topped with a generous portion of whipped ricotta. Calamari, crunchy and greaseless, arrived in a large portion, plenty for three diners. A bowl of warm red sauce and slices of lemon accompanied the delicate, hearty squid. The combination of the crisp, springtime salad and the salty, savory calamari could not have been a more perfect start to the meal.

There’s a short list of Italian-inspired cocktails — I tried the unusual Negroni Bianco ($12) — along with at least one Italian beer and a handful of Italian and other wines by the glass. You can order from a more extensive list of wine bottles, but we were happy with the glass pours. The bright, slightly acidic Grillo ($11), a white from Sicily, was an excellent accompaniment to my lemony agnolotti.

For dessert, we sampled both the house tiramisu and the panna cotta (each $10). I’m a fan of the latter and order it whenever possible. This version was less firm in consistency than I’m used to, but it had a pleasing flavor, the creamy base topped with strawberry compote.